Most stories begin with what is called a lede—the important factor that makes the story a story. But in the case of the Woodbine Hotel & Restaurant in Madisonville, the lede changes daily—simply because almost everyone has a story about the Woodbine and its significance in their lives either as children or adults.

Take Herbert Van Schellenbeck’s Woodbine story for example. Van Schellenbeck, in his mid-80s, was born in Guatemala and raised in Germany. He first came to know Madisonville many years ago, when he attended Allen Military Academy with a relative of Mary Stephens. It was then he became friends with the Heath family, a long-standing family in Madisonville. It was here also that he met and married his late wife. In fact, he honeymooned with her in the now residential home of the current owners’ (when it was a boarding home of sorts). And it was because of the Cattlemen’s Association Dinner way back in the day that Herbert became a fan of the Woodbine Hotel and Restaurant.

The Woodbine Hotel and Restaurant was built in 1904. Back then it was known as The Shapira Hotel, as it was owned by Jake and Sarah Shapira, who were Jewish immigrants from Russia. According to historical records, Jake owned a dry goods store and ran a saloon on the main street of Madisonville. The saloon was located in a building behind the store.

Susan Warmuth, current owner of the Woodbine Hotel and Restaurant, said of the saloon building, “It was relocated to the Woodbine property in 1920. The saloon, which is now known as the Brimberry House, is the oldest building in the county (circa 1870).”

Warmuth continued, “The Shapiras had a boarding house, which was located on the same site as the current hotel, and it burned to the ground in 1903.”  As the town began to grow, the Shapiras decided to rebuild.

Recognized by the state of Texas as a landmark, the Woodbine Hotel and Restaurant’s physical structure is unique, explained Warmuth. It is constructed of “two kit houses, purchased most likely from Sears & Roebuck.” The two sides of the hotel are houses that face each other, joined by an upstairs and downstairs parlor.

The Woodbine originally had 16 rooms and offered accommodations for eight guests. Only the owners’ suite had indoor plumbing during the earlier years.  Guests used the outhouses and bathhouses located in the back with tub water heated in the kitchen. Eventually, plumbing was added to a few rooms, but many were small rooms.

Warmuth said, “The telephone also came to Madisonville in 1904, and the town’s original telephone booth was located at the hotel. At the time, it was the only telephone available to the town.” The booth sits in the bar/sitting area of the Woodbine today.

The Shapiras experienced tragedy during the construction of the hotel, when Jake stepped on a nail and died three weeks later of tetanus. They did finish the hotel. In the early 1920s, the Shapiras leased the hotel to many operators, and then Clara Wills purchased it in 1929, changing the name and putting the hotel through another major renovation in the mid-1930s. Due to decline from the Depression, war, and the abandonment of the rail line, the hotel was closed in the early 1970s.  Randy and Lynne Parten purchased it in the late 1970s and completely restored the building to the original condition – saving it from destruction.

In 1999, Susan Warmuth purchased the hotel. Susan is one of the main reasons that Julia Parten comes to the Woodbine.

Parten, of Madisonville, is a faithful customer/diner of the Woodbine Hotel & Restaurant. On a Saturday night, as she was picking up a to-go order, I asked how long she had been coming to the Woodbine, and she said, “For many years…at least the last seven.”

During that time, Parten has seen a number of changes in the hotel/restaurant and staff. But overall, one thing has remained the same, “The atmosphere is nice and the food is delicious.” Plus, another reason she likes coming to the Woodbine, Parten said, is owner/innkeeper Susan Warmuth. “I really like Susan.”

Stories of celebrations, reunions, meetings, and working at the hotel are shared by a number of Madison County citizens, but perhaps the most told stories of the Woodbine Hotel and Restaurant are of the ghosts and spirits said to be inhabiting the hotel.

Noted storyteller Shelly Tucker has written about the ghostly footsteps she heard during her stay at the Woodbine. Others have told of unexplainable happenings during stays. Some remember viewing the hotel through the years as a place of mystery, while many others said the hotel was just like home.

John Partridge sat in the dining room of the Woodbine Hotel & Restaurant on a Tuesday night, a weary but happy road traveler, texting back and forth with a friend of his from Austin who was going to be on the show Shark Tank. It was a typical visit for John, who was in town on business. “I have been coming here for five to five and half years, mostly on business.” He came across the Woodbine Hotel and Restaurant because, “I travel every other week. I am on the road four nights of the week for work, and I look for places that are different from the norm.” Partridge, 50 and a married father and grandfather from the Austin area, said, “The Woodbine is as close to home as it gets. I have probably stayed in every room here, and they are all great.” He does admit, though, to liking the Madison Suite the best.

Nancy Rosiu had nothing but praise for the Woodbine. “My daughter had her wedding here. It was the perfect setting for a small (53 guests), intimate wedding.”

Andrea Klapper said, “My husband and I celebrated our wedding anniversary here, and it was so peaceful and comfortable.”

Stacie Woods said, “The Woodbine is awesome.  The atmosphere was fantastic. I was given a tour of the bedrooms and was very impressed that the furniture keeps with the integrity of the house.”

The Woodbine Hotel and Restaurant is not just your ordinary bed and breakfast inn. There is so much antiquity and tradition there, and it holds so much of Madison County’s history inside its walls. 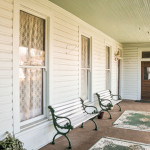 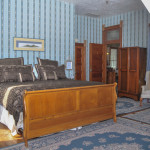 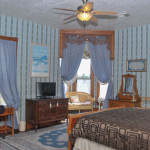 For more information on the Woodbine Hotel and Restaurant, visit woodbinehotel.com.