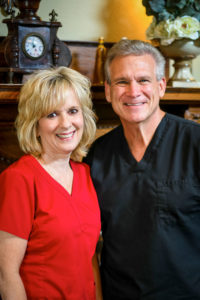 Bill and Becky Roche came to Huntsville 30 years ago

When Bill and Becky Roche first came to Huntsville, they were literally just passing through. They only intended to stay a year and move on. But as time passed, Huntsville became their home, and now (30 years later) they have raised their children here and have a well-established family dental practice in downtown Huntsville. Their first dental office was in a building next to the hospital. Then, in 2004, they were given the opportunity to buy the old building on the corner of University Ave and 12th Street, owned at the time by Harriett and George Dow. In the 70s, the Dows owned Dow’s Clothing Store in that very building, according to James Patton of the Walker County Historical Commission, but Bill thought he remembered knowing that Mr. Dow also owned a car dealership in Huntsville back in the 50s.

The building is 1,750 square feet, equally distributed in both top and bottom floors, for a total of 3,500 square feet altogether. Since the building was not in good condition, soon after buying it, Bill and Becky decided to renovate, but it didn’t take long to realize renovating would not be an easy endeavor. According to Becky, this became more and more apparent as ceiling tiles and floor boards were removed. “We basically gutted the whole thing. You could pass by, and all you could see was condensation and steam.” The renovation project took approximately 9 months to complete. 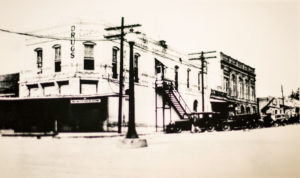 Although it is not clear when the building was actually built, it is estimated to be sometime between the 1870s and 1880s. A black and white photograph taken around 1901 shows the early structure had a veranda on the front of the building. Dr. Roche enthusiastically showed a receipt from 1951 that fell out of the wall during the renovation process. It is a proof of purchase from the Dr. Pepper bottling company out of the Trinity/Riverside area, for a case of Dr. Pepper for a whopping 81 cents. 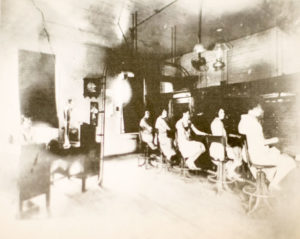 The Roche Building has had many owners in its rich history. Whether as a telephone company (picture here), a saloon, a travel agency, a drug store, or a clothing store, this building has seen an amazing amount of Huntsville history.

Throughout history, the Roche building has had numerous previous owners and has served the Huntsville community in various ways. According to James Patton, in its earlier years, the Roche Building was once the Opera House Saloon. Old time locals remembered a time when there were at least 11 saloons all around the square. In the early 1900s, it became a drugstore, and although it changed names and owners throughout the years, it remained a drugstore until the early 70s, when it was bought out by Harriet and George Dow. The couple owned Dow’s Clothing Store for many years until they retired and moved to Humble. Before selling the building to the Roches, it was also home to Huntsville Travel and D&M Uniforms. During its time as City Drugs, townspeople remembered going there with their parents for a soda or ice cream while they waited for their prescriptions. A picture taken during the World War II era reflects that period.

The second floor of the building has also had its share of occupancies. In the early 1900s, the upstairs floor functioned as the Huntsville Telephone Company, while Nance Drugstore occupied the bottom floor. “Ms. Vadie Ellisor was a long-time chief operator for the phone company,” said Patton. After the phone company moved out, it became a doctor’s office. Dr. Roche commented that a couple of his patients actually remembered seeing the doctor. In fact, one even had her tonsils removed up there. Another interesting finding during the remodeling occurred when they took out the ceiling. 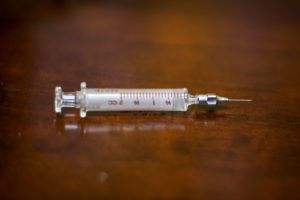 Brand new Pyrex glass syringe (pictured here) found in the ceiling during renovation, probably falling through a crack in the wooden floor of the drug store.

Bill presented an old Pyrex glass syringe that he now keeps in the display case in the main lobby. The syringe had fallen out of the ceiling. “It did not break, and it’s in pristine condition,” said Bill, “and since the floor is wooden and has slits, the syringe fell right between one of the slits. “It looks like the syringe was brand new and had never been used,” Becky added.

At present, the upstairs is set up as a 2 bedroom, 1 bath residence, but there is no one living in it because it is in such bad shape. The last time the upstairs was remodeled was back in the 50s, and with exception of a few times the Dows stayed there during their visits back to Huntsville, it is kept locked. This brings up a couple of interesting stories. 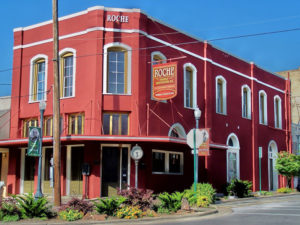 Curiously, a girl who is renting a small building next door once asked if anyone was living upstairs, because she said at night, it sounded like furniture was being moved. Also, “We have an electronic doorbell to signal when patients arrive. We have one chime for the hygienist, and one for me,” said Bill, “and occasionally, for no reason, the chime will go off.” The interesting thing about this is that it’s not the regular chimes that they have set, but a different chime. “Since we’re both Christians,” Becky interjected laughingly, “instead of saying it’s a ghost, we say it’s the ‘Holy Ghost!’” I’m here late at night when there’s no traffic outside,” she added, “and sometimes, the chimes will go off for no apparent reason.” Also, people sitting in the patio at the cafe next door have commented that they thought they’ve seen people upstairs. 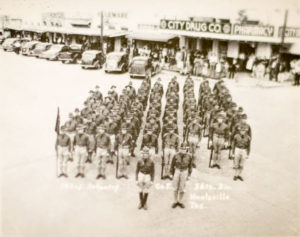 Ultimately, Bill and Becky feel good about what they’ve done with the building. “It has truly been a ‘labor of love.’” By improving the building, they feel they have, in some way, contributed to the community, and they take pride in that. In 2007, the Main Street Advisory Board and the Main Street Committees presented Roche Family Dentistry with the Downtown Hero Award in appreciation for their service and civic leadership. “Huntsville became our home, and we love this community,” said Becky. Today, when patients visit the clinic, they get to experience a step back in time, with a modern twist and modern equipment. 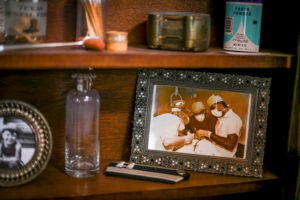 Bill Roche is the third generation in a family of doctors (pictured here) who served their community and made a difference.

Bill is a third generation “Dr. William C. Roche,” and in February 1993, while attending his grandfather’s funeral in Denton, Ohio, he recalls shaking the hands of at least 300 people that told him, “Your grandfather delivered me,” or “He delivered my babies.” You could see the difference he made in that community. He was that community. “I felt inspired, compelled to do something like that,” said Dr. Roche. “We always took pride in having a small-town community dental office. Today, Bill can tell you how he saw children when they were only three, and now they are in their twenties and married, bringing their children to see us,” said Becky.

In the near future, Bill and Becky hope to be able to restore the upstairs and possibly turn it into a bed and breakfast.