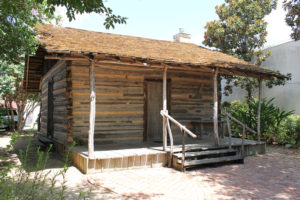 Built in 1840, constructed of pine rafters and hand-split shingles, the Roberts-Farris Cabin, located on the Square in downtown Huntsville, is not a typical Welcome Center.

Hezekiah Farris, a Tennessee native who moved to the area now known as Walker County in 1835 to stake his claim on the opportunity for free land, ended up being recruited to fight alongside General Sam Houston for Texas’ independence from Mexico. Hezekiah was instrumental in the capture of Mexican general Santa Anna and the victory at San Jacinto. For his service, Hezekiah was awarded 640 acres of land in Walker County. This acreage was the original location of the Roberts-Farris Cabin, which Hezekiah had built for his stepson, Allen Roberts, as Roberts and his family were moving to Texas as well. From there, the cabin was passed down through generations of the Farris family, moving locations and serving a variety of purposes. 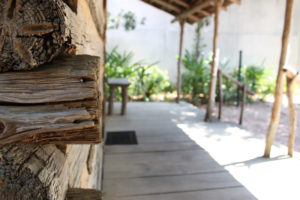 Like many cabins of the time, the Roberts-Farris cabin was built with notched logs that could be lifted and taken apart, much like Lincoln Logs, making it possible for pioneers to disassemble and move when needed. According to Maxie Farris, great-great grandson of Hezekiah, the cabin has been moved four times, and has not only served as a family home for generations of Farris and Roberts children, but also rented to tenants during the Great Depression, once served as a honeymoon suite for a newlywed couple in 1939, and (eventually) storage. From 1940 to 2001, the cabin was used to store hay and feed. “The cabin is important to the extended Farris family,” said Farris. “It was handed down, and has been a focal point for our family.” 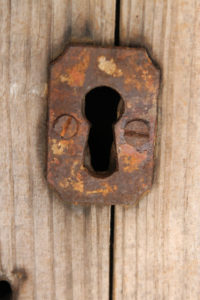 In 2001, Maggie Farris-Parker, sister of Maxie, owned the property where the cabin rested, off FM 1791 near Huntsville. Farris-Parker contacted the city of Huntsville, where she was connected with the historical society. The historical society then involved Sam Houston State University history professor Dr. Caroline Crimm to begin the process of moving the cabin downtown. In her book, Cabin Fever: The Roberts-Farris Cabin, Crimm describes her initial thoughts on the task:

“Of course the Texas History classes can move the log cabin! We’ll have a couple weeks during the summer course. That should be plenty of time to dismantle the cabin, move it into town, restore the logs, reassemble the building, and rebuild the roof—sort of like Lincoln Logs, don’t you think? How hard can it be? We’ll have about thirty or forty students, most of them future teachers, many of them big, brawny, wannabe-coaches. The graduate class can do the research and write reports on the history of the cabin, and we’ll publish a little book about the whole project. I’m sure they’ll be excited to have the chance to be a part of something so historic!” 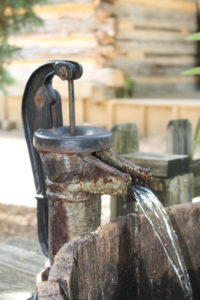 Dr. Crimm found the project to be much more cumbersome than anticipated, and had a few students drop the class after hearing the work required. Still, through the challenge, Dr. Crimm persevered and successfully completed the job.

Over the course of five weeks, with inmates from the Texas Department of Criminal Justice performing much of the labor, Crimm lead a group of SHSU students in the great task of disassembling, repairing, moving, and reassembling the cabin from the Farris-Parker property to the square in downtown Huntsville.

“It was an event,” recalled Maxie Farris. “My brother Keefer and I brought in materials and supervised the projects, while the inmates and students moved the cabin.”

This was not the first time inmates had a hand in the structure of the cabin. Farris explained, “During the Depression in the 1930s, the inmates painted license plates for cars, but couldn’t sell [them]. My father ended up with extras and used them as shingles.” The license plate shingles have since been replaced, but a few were retained as keepsakes. 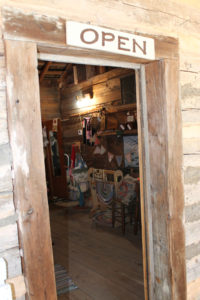 Today, the cabin rests on University Avenue across from the Walker County Courthouse. Handmade quilts and crafts are sold during open hours, Thursday through Saturday from 10:00 am to 2:00 pm. The cabin is operated by volunteers and members of the Tall Pines Quilt Guild.

The square in downtown Huntsville used to be the center of city life, with a variety of stores, restaurants, and community events to draw locals and visitors alike. With the development of shopping centers along I-45, activity on the square dwindled. In recent years, residents and businesses located downtown have sought to bring traffic back to the historic downtown area by extending shopping hours on the first Thursday of each month, and hosting events like the Downtown Farmer’s Market every Saturday, seasonal events like Fair on the Square, and Junk-A-Palooza Community Garage Sale. The hope is to revitalize downtown Huntsville, fostering a greater sense of community and hometown pride, as well as supporting small business owners. 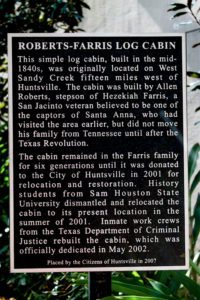 The Roberts-Farris Cabin contributes to the downtown area both by serving as a welcome center and bringing a piece of historic Huntsville right to the center of town.

Diane Harris, bookkeeper for the cabin, encourages locals and visitors alike to stop by the Roberts-Farris cabin and learn more about the local history. “This is a great place to visit as you walk through the square. If someone is looking for information, we are a welcome center and are here to answer those questions.”

For more information on the Roberts-Farris cabin, stop by the cabin during open hours and purchase a copy of Dr. Crimm’s book detailing the cabin’s history and the moving of the cabin.

For more information on events in downtown Huntsville, visit facebook.com/COHMainStreet.