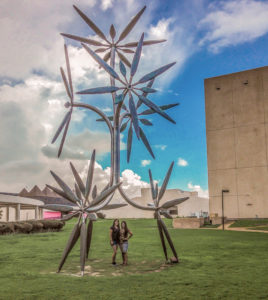 James Surls has lived in Colorado for the past 20 years, but his Texas roots are long and deep. He grew up in East Texas, earned his bachelor’s degree at SHSU, taught in Houston and Dallas, and he lived in Splendora for 20 years. He returns to Texas regularly, including a recent visit for the opening of his “James Surls—Time and Time Again” exhibit at the Wynne Home Arts Center.

You attended SHSU, and you had an artistic epiphany of sorts shortly after coming to campus.

I met Charles Pebworth, one of SHSU’s prominent art professors and practicing artists, when I was walking across campus, and he was chain sawing near the Old Main building. He was cutting this wood, and he was making art. I had cut wood growing up, but it was the first time I was seeing it as art.

How do you create art?

When I started, I conjured art from the material, a process I learned from Pebworth. He let the lines of the material suggest the form, and that’s a good process. But at some point, I wanted to dictate the terms a bit more. You still have to follow the lines of the material, but you can piece things together. One piece might evoke a left arm; another a right arm; another a torso. You have to be more architectural, but it works.

You’ve been critical of abstract artists. I heard you say once that they take order and create disorder. You impose order from what exists. Is that a fair characterization?

I’ve always had trouble with the phraseology around abstract art. My first real view into the art world was through abstract expressionism—that’s what was there. A lot of their work is untitled. It’s “Untitled 304.” That’s like not naming your kid! Nor do I like to hear, “Oh, it can be anything you want it to be.” I want art to be something, to represent something, to be symbolic of something. 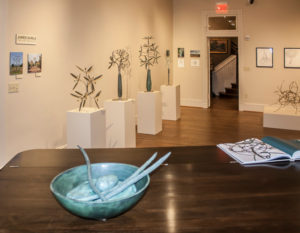 Are you also troubled by “minimalist art,” the kind of thing Donald Judd did?

I cut my teeth in East Texas, but we traveled to New York in my youth. We saw gridded streets, gridded buildings, and the ceilings in buildings were gridded. In the art world, art by grid was called minimalism. My conception of art in East Texas, however, might as well have been from Mars, an entirely different world. My world has spirals, universes, molecules, and configurations, and it’s just different. Once I was walking through the Dallas Museum of Art with my dad, and there were three plywood cubes set up in the center. My dad was a carpenter, and he could build anything. And he looked at those three plywood boxes and he said, “Son, what is this?” I said, “That’s a sculpture.” He said, “Oh, I thought it was three plywood boxes.”

As you mentioned, your dad was a carpenter, and you use a lot of pine and oak in your work. Are these materials a connection to your East Texas upbringing?

Yes, I once sort-of jokingly said I was the Will Rogers of wood—I’ve never met a piece of wood I didn’t like.

How durable are your wood pieces when they are installed outside?

Early in my career, I probably did 25 major outdoor sculptures that were steel cord with wood extremities, and now they are all gone. Even wood that is treated will rot, and it rots from the inside.

I’ve heard you say that different wood evokes different gender connotations. Can you discuss that?

Pine makes better female figures, and oak makes better male figures. That’s a psychological thing, but I think the debarked pine is very fine, and most oak are going to be more gnarled and masculine. 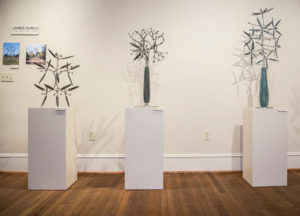 Speaking of masculine, you also use the shape of a knife in many of your pieces. Is this a masculine symbol?

Yes. When I went to school here at SHSU, almost every male on campus had a pocket-knife. You could say, “Does anyone have a knife?” And there’d be ten of them pulling one out. I think males have an inherent connection with that as a symbol of power, the sword. It’s been around since our beginning.

Surls may be an artist from East Texas, but his work can be found across the world, including at the Los Angeles County Museum; Meuseo de Art Contemporaneo de Caracas, Venezuela, Mexico; Museum of Modern Art, New York City; Nelson-Atkins Museum of Art, Kansas City, Missouri; San Francisco Museum of Modern Art; Solomon R. Guggenheim Museum, New York City; Stedelijk Museum, Amsterdam; Whitney Museum of American Art, New York City; and the Cranbrook Academy of Art Museum in Bloomfield Hills, Michigan, where he also earned his MFA in Art. His work has been featured in more than 400 publications.

Some time ago, you rejected the traditional business model for art, where artists use dealers to sell their art. You show and sell your own art. Most people don’t know the workings of the art world; could you explain the traditional model and why you went your own way? 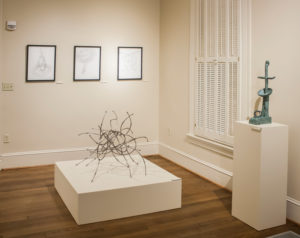 I’ve had a lot of dealers, and some have been incredibly nice people. But dealers take half of the sales, and that was the reality of my career for almost four decades. Charmaine, my wife and an artist herself, keeps records of our sales, and she would say, “You are making the dealers a lot of money.” A dealer might have 25 or 30 people in the gallery, plus they work with three or four on the side. They are working for you about an hour a week. I have an agent I hired about eight or nine years ago, and she works for us. And that’s important. You know, another thing is that I’m not a watercolorist. If I was, I could keep hundreds of pieces of work in a one-room studio. But my work is large, and the materials consume a lot of space. I need a crane and pallets to do my work, and it takes thousands of dollars to create one sculpture. Then, to take it to a dealer who takes half the money just doesn’t make a lot of sense.

How long does it take to do one of your large pieces?

A long time. For the metal ones, I begin by carving them out of wood, then I’ll create a mold. Once I get the molds, I send them to a foundry, and while they are at the foundry, I’ll work on a different piece. When the materials come back from the foundry, we have to fit them, weld them, fabricate them, put the rods through them. It takes time, and you juggle multiple pieces simultaneously.

What’s the most expensive piece you’ve ever sold?

Well, it’s relative. The biggest sale was the one on Kirby, but it was also the biggest piece. I made less money on it in terms of time than I do with some of my smaller pieces. The sale price was $750,000, but it’s misleading, because it cost a whole lot of money to make.

How many pieces have you done in your career? 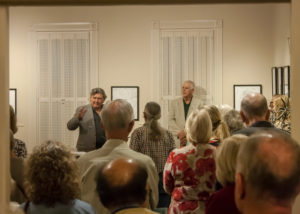 You mentioned the work in the Wynne Home. What’s your favorite piece currently showing there?

I’d probably need to walk you around and point at them, but She Walks with the Blue Angel would be one.

The “Blue Angel” refers to the earth.

A common motif in your work is the spiral form, sometimes in the form of a flower and petals; other times with more of a molecular shape. Can you discuss that?

That form has an organic quality to it, a growth pattern. It shows a beginning, expansion, a life expectancy. It’s the form of a molecule, but it’s also the form of a galaxy. You have to accept that there is a universe in a grain of sand. If you’re not willing to accept that, then I don’t know if you can walk the poetic path. I think the molecules and the flowers, they all travel the same path. It’s a willingness for a singular belief.

Surls’ “willingness for a singular belief” evokes a memory he includes in his artist statement, drawn from his first meeting with Charles Pebworth:

“Right then and there, I drank from the well of true belief in something far greater than myself. I got the calling for my life, and I answered the call with a resounding ‘Yes, I will do it.’ Charles Pebworth was the perfect person for me to encounter: he guided me through the gates of future, down the pathways and into a state of true belief in myself and what I could do with my life. All of this circumstance was also fate — it was destiny, for it has served me well for well over 50 years. I have to say, I was the right kid in the right place to be given a gift. I thank God that I took the gift and ran with its potential, and I am still running and still thankful to a great beginning. Thank you, Mr. Pebworth.”

Almost 30 of Surls’ works are on display at the Wynne Home Arts Center (through mid-April), and SHSU has several of his works, including “Around the Flower Wall,” the largest work of art in the James and Nancy Gaertner Performing Arts Center.

For more information on Surls or for images of his artwork, visit: www.jamessurls.com.