Just for Fun: Trekking to the Top of Texas

Story and Photos by Luke Rogers

“This is in Texas!” That’s what I kept saying to myself as we made our way toward the summit. The fact that these gorgeous mountains—full of hiking and climbing opportunities—were in my home state only confirmed to me what I already knew: The Lone Star State is indeed the greatest place God ever created.

Texas isn’t a place typically known for mountain climbing, yet it has some of the most beautiful peaks in the United States. The Guadalupes, specifically, are a dream for any hiking enthusiast. Tucked up in the Texas-New Mexico border, they boast the highest peak in our great state, aptly named “Guadalupe Peak”. 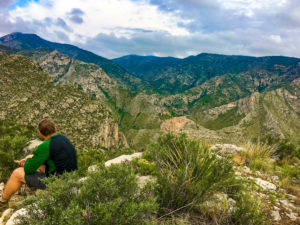 The first thing I noticed when we started on the trailhead was that I needed to catch my breath. Not a great start to a nine-mile journey with 3,000 feet of elevation gained in the first half. This very first part of the trail certainly did not seem strenuous, but we soon passed several other hikers taking breaks because they, too were out of breath. We were all adjusting to hiking at a higher altitude (living in the Houston area does put one’s lungs at a disadvantage when it comes to high-altitude exercise). Just as my lungs began to adjust, we came to the switchbacks.

For the next mile and a half, the trail repeatedly turned back on itself at a very steep incline, going up the southeast side of a mountain. My lungs immediately shot into overdrive, and my legs were thankful we had been running stairs for the last couple of months, because these switchbacks were kicking my tail. The saving grace, however, was that when I looked around, there was stunning scenery in every direction. The higher we went, the more beautiful the view became.

Eventually, the trail began to level out. As we came up the first crest, we got a view of the entire mountain range. As the scenery in distance changed, so did the mountain itself. Suddenly, the mountain was covered in forest. As we made our way around the northwest side of that first peak, we were surrounded by pines and a breathtaking view. The trail pushed on further into the woods and into the range, and we soon came across a small meadow and the summit campsite. Just past the site, right as it seemed we were almost to the summit, the trail took a hard left on a huge cliff.

After having gathered some frustration, we pushed on. Thankfully, the trail followed this cliff at a decline for about a quarter of a mile. At this point, we followed the trail down through a small pass between two faces and over a bridge until we came out on the southeast side of the next peak. If the view had been beautiful before, it was now breathtaking. My own personal pace up the mountain slowed significantly here, because I kept stopping to take photos. From this side of the mountains, a sheer rock face called El Capitan (not the more well-known El Capitan in Yosemite National Park) dominated the view, looming 3,000 feet above the Chihuahuan Desert below. As we pushed forward on that side, we could feel we were getting close.

We kept hiking, and soon the trail turned back and headed up and around the north side of the peak again. We soon realized that the peak we were closest to was, in-fact, a false summit, with the true summit still a half-mile away. So, we gathered ourselves and stepped on. After stepping around and over a few thrilling drop-offs, the trail followed a cliff right up to the summit. We made it!

As we sat on the top of Texas, listening and watching the birds whiz over the peak, all I could think about was how I wanted to stay here. The mountains, and the desert out beyond them, brought a tremendous peace as I looked out. At 8,751 feet, Texas looked pretty good. She was singing of the glory of her Creator. And how good God is to have made such a beautiful place. Now…I just had to get down.

So, after lunch and a nice afternoon nap, we headed down. I soon learned that the thought, “Going down is easier than going up,” is in-fact a total lie. The descent beat me up. At first, it required less energy overall. Soon, however, it became obvious that my feet were going to hate me by the time we were done. Even with great hiking boots, the rocky, mountain terrain takes a toll on one’s feet. By the halfway point, I could feel every little pebble under my feet. In addition to all the foot-related pains, my knees began to become sore. It turns out all those little stabilizing muscles in your legs get tired when you have to flex them for two and a half hours straight.

Soon we returned to the dreaded switchbacks—my nemesis. As we made our way down, we remembered how hard it had been to come up. Even though every step was pounding our knees, we could thankfully say that, in this one instance, it was easier to go down. Each hiker we passed was gasping for breath—an experience I was glad to have behind me; yet, it had absolutely been worth it to climb those horrible slopes for the view at the top. 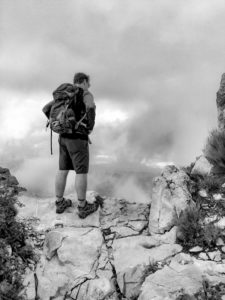 As we drove away, I watched the mountains out the window. “We were standing right there,” I said to myself as I looked at Guadalupe Peak sticking up from the middle of the mountain range. “I’m ready for whatever is next.” The excitement of having done something so fun in such a beautiful place quickly overshadowed the physical exhaustion and soreness. It didn’t take long before the only thing on my mind was the next mountain to climb.

That next mountain was Mt. Whitney, and as the highest peak in the Lower Forty-Eight, it towers above the Sierras. It would be a much tougher climb than Guadalupe, but for now I was happy to rest in the satisfaction of having literally stood on top of Texas. Plus, I was so hungry. I just wanted a quesadilla.