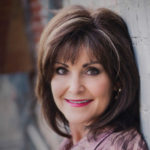 Ministry through the movies—a match made in heaven and maintained on earth. That’s the ambitious dream of Carla McDougal, founder and CEO of Reflective Media Productions’ newest effort–war movie effort if you will–Stronger.

“This movie explores one soldier’s battle with Post Traumatic Stress Disorder (PTSD) as he struggles to recover from his injuries and fit back into the civilian world. He soon learns that he can’t do it by himself.” McDougal said. “We’ve worked really closely with recovery groups like Mighty Oaks Warriors, Branches of Valor, and other organizations to accurately portray and raise awareness of the signs, symptoms, and feelings of hopelessness people with PTSD experience. This is a very serious issue; however, we show hope for healing.” 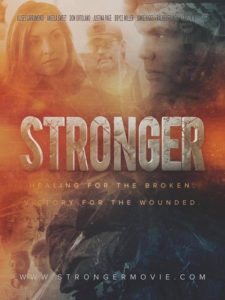 At the heart of this cinematic cyclone is an unconventional character study caught in the crosshairs of duty, honor, faith, and love. Combat dream-sequenced flashbacks, set on blasted, smoky battlefields roar with the expression of the pure violence of war, helping to draw the viewer into a world few will ever know or understand.

“What we are also trying to do is go beyond the community of veterans and show how this condition (PTSD) also affects others like first responders, burn victims, as well of victims of violent crime. We have to bring these issues to the surface, because there is help out there. Also, we show through this movie the hope and healing that Christ provides,” continued McDougal. This moving film also has an old-fashioned love story element that is expressed with technique, craft, and a knack for spectacle. 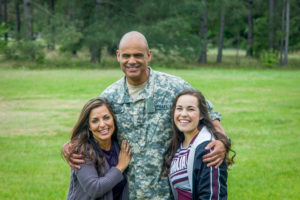 Ulises Larramendi, who portrays protagonist Master Sergeant Victor Raphael comes across as totally credible, having trained with veterans from the Mighty Oaks Foundation. During filming of one of the movie’s final scenes, “Victor” delivers a poignant soliloquy before a live audience in Huntsville, Texas that moved many to tears with expressions of “that’s my life.”

“He really came across like a real veteran. I was surprised he was only acting,” noted one of the local veterans serving as a movie extra. “I had to tell myself this is only a movie, but the theme is so real and effects so many of us.” 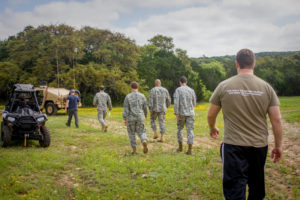 With absolutely no military experience, Larramendi breathes life into his character, at times staying totally in character for days between takes. He was so convincing as a soldier, many just assumed he was a veteran. “He really spoke life into and through his character in the script,” McDougal said. “He was so into his portrayal of Vic that the script for the final scene changed, and it was all him—he wrote it.”

The story begins with Vic, a hardened, combat career soldier and leader of men in battle, finding his career suddenly over. Suffering a debilitating injury, he soon learns he has other problems with injuries that are unseen. 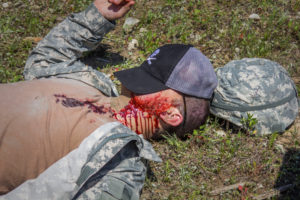 He suffers from frequent nightmares, as the movie begins with him submerged in one of them. He does not understand what is happening to him and tries to brush it off, but is unsuccessful. PTSD creeps in and affects every area of his life, as he becomes more and more isolated and emotionally remote.

Angela Sweet plays Victor’s movie wife Michelle. Her portrayal of the concerned, devoted military wife steals many scenes, with her command at bringing to bear the layers of complex chemistry and emotions that go unnoticed with spouses of those suffering the effects of PTSD. 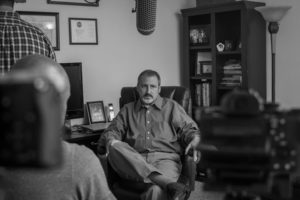 “This is another area we attempt to explore with this film,” McDougal said. “PTSD affects an entire family and community.” Michelle feels that her husband is anything but normal after his last tour in Afghanistan. She senses a man who, after many combat tours, has finally reached a breaking point; however, Vic, ever the soldier, will not hear any of it. He either refuses to take notice of, fails to acknowledge, or intentionally disregards his wife’s observations.

The motion picture moves like gangbusters as Vic’s life becomes more and more difficult for him to control, as one event causes another that eventually spirals out of control. Vic finds himself lost in a world he no longer understands or can connect with.

“It’s almost like a professional athlete who suddenly finds a long career over, and there is no more that sense of camaraderie,” McDougal said. “For Vic, there are no more parades, no more honor of the uniform, no more adoring nation.” 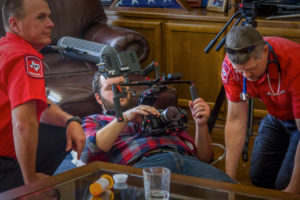 Feeling worthless, Vic decides that if he were no longer “around,” then his wife could move on with her life. He struggles to come to grips with a career he had identified with taken too soon, and also with finding himself confined to a wheelchair.

The film then moves to Vic, at the earnest emotional appeal of his wife Michelle, seeking counseling. “We show the counselor, Dan Jamieson (played by Bryce Miller), and Vic’s conversation, and he (Jamieson) basically hands Vic a small booklet containing information about the Mighty Oaks Foundation,” said McDougal. “The counselor explains that this is not just a retreat, but a place of community and spiritual healing. He then goes through a process of what will help him.” 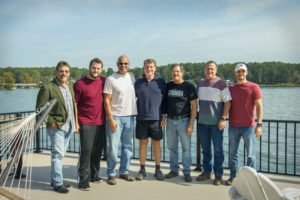 ‘Vic’ understands the physical wounds, but comes to understand that his spiritual and emotional wounds will not fade, but will grow over time if not dealt with effectively. As ‘Vic’ examines his life, he remembers that, as a youth, he had faith; however, in his entire adult life, as well as his sterling military career, faith has been largely regulated to the fringes of his world.

“Through the counseling sessions, Vic connects with Tommy Ortel (played by Don Ortolano). Tommy is an alcoholic who has spent time in and out of rehab, but still has a heart for wanting to get help. Vic realizes that his friend Tommy has no means of transportation to make it to Mighty Oaks. After Tommy shares his true life story based on actual events, Vic now has a purpose to help his friend make it to Mighty Oaks for help. Vic tells Tommy, ‘I will get you to that retreat’,” McDougal said. 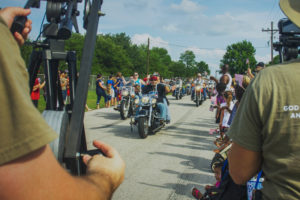 Feeling a newfound sense of duty and usefulness, Vic gets to the retreat. Meanwhile, Michelle is being tempted by an old flame and is influenced by prayer warrior and neighbor ‘Aunt Hazel’ (played by Justina Page), who encourages Michelle to seek counseling as well.

Throughout the movie is depicted a representation of community and the importance of sharing our stories and being there for one another, based and centered on the love Christ has for all of us and the healing that can come from it. When Vic finds out about the temptations of his wife and begins to drink more heavily, Michelle understands her part in Vic’s condition as well, and she agrees to go to a women’s counseling session to help her understand PTSD’s effect on spouses. 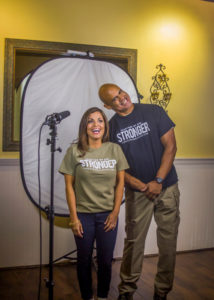 But it’s the combination of their marriage, faith, and community that ultimately pushes our hero towards the help that will make all of them Stronger for it.

Check out Stronger, a movie that will bridge the gap between the military and civilian world. For more information and assistance resources, visit strongermovie.com.