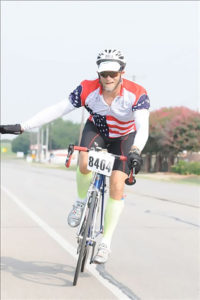 By the time Jody Slaughter was in his fifties, he had completed many footraces, bike races, and triathlons. Among his triathlons were two half Ironman events, which included 1.2-mile swims, 56-mile bike rides, and 13.1-mile runs. He had also run 16 full marathons, but in 2015, Jody’s quest to qualify for the prestigious Boston Marathon led to a completely different kind of journey.

Jody’s goal was to qualify for Boston at the Houston Marathon in January 2016, which meant he would need to run the 26.2 miles in an 8-minute-per-mile pace. In August 2015, he completed the “Hotter than Hell” 100-mile bike race in Wichita Falls in 4 hours, 38 minutes, averaging 22 miles an hour. “I was in the best physical shape of my life,” he says.

At about that time, Jody’s right shoulder began bothering him, and he suspected a rotator cuff injury. Still, he persevered with his training. In October, he ran a 10-mile race in Fort Worth, maintaining a 7:30-per-mile pace despite warm conditions. Two weeks later, he ran 15 miles. On October 29, however, the nagging shoulder demanded immediate attention when his humerus (upper arm bone) broke just below his right shoulder without apparent cause. There was no trauma; the bone had simply broken. “It was just hanging like a wet noodle,” Jody says. 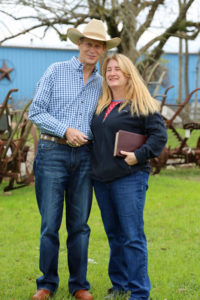 Jody and his wife Susan

The next few weeks were a blur of emergency room and doctor’s office visits, rejected insurance coverage, and frightening predictions. One doctor looked at Jody’s x-ray and told him he had bone cancer; furthermore, it probably originated somewhere else in his body and spread to his bones. The doctor told Jody he needed to report to M.D. Anderson Cancer Center without delay.

“You immediately go into denial when you hear that word ‘cancer,’” Jody says. “My family and I were all thinking, ‘This doctor is crazy!’ I just finished in the top one percent of the entire nation in my last bike ride. I just ran 10 miles yesterday. No person who has a body ravaged with cancer can do the things I’ve been doing.” 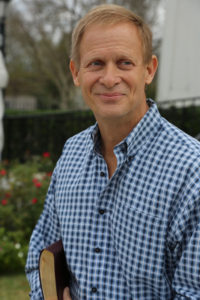 Jody and his wife Susan battled the healthcare bureaucracy for several weeks. Throughout this time, Jody was in relentless pain. Nearly a month after the fracture occurred, Jody underwent surgery to repair the damage, test the bone cells for cancer, and replace the shoulder and humerus with prosthetic parts.

Although Jody’s bloodwork was all within normal parameters, a CT scan revealed awful news. The primary malignancy was renal cell carcinoma in Jody’s left kidney, and the prognosis was poor. “By definition, if it has metastasized from one area to another, it’s stage four,” Jody explains. Again, Jody underwent surgery, this time to remove the diseased kidney. Afterwards, his surgeon was pessimistic, predicting with nearly 100 percent certainty that the cancer would reappear in another place in Jody’s body within just a few months. Renal cell carcinoma, Jody says, does not respond to traditional cancer therapies, so he was faced with the likelihood of future tumors that would require treatment or surgery.

A few months after his kidney surgery, Jody’s shoulder was again a paramount issue. It hadn’t felt right since the initial surgery and was still causing constant pain. Jody suspected something had gone terribly wrong. Sure enough, he faced yet another surgery to repair the shoulder a second time. 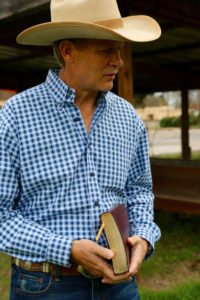 After Jody’s first hospitalization, his family and friends rallied. Many people offered to organize fundraisers and to help in other ways. “My family and I had all our needs met. We didn’t need money. Our need was deeper,” Jody says. “I needed to connect with the ones I loved.”

Then he had an idea.

“Most of the staff at M.D. Anderson put in years of effort to help patients,” Jody says. “So if they spent years of their lives preparing to help me, then I wanted to be a blessing back to them.”

So, when his cousin Kathleen Frost asked what she could do to help, Jody said she could bring a dozen roses to pass out to medical professionals. Soon, Jody was passing out roses, cakes, and candy to the M.D. Anderson staff. Then his brother Micah offered to help. “I told him, ‘I have been passing out roses and cakes and candies, but that’s really not who I am. It would mean more to me to pass out one-year Bibles.”

For years, Jody had been reading through the Bible every year, with help from a publication called The One Year Bible. Rather than the traditional arrangement, it is organized by date into 365 segments. Each daily reading includes a segment from the Old Testament, another from the New Testament, a passage from Psalms and a shorter one from Proverbs. 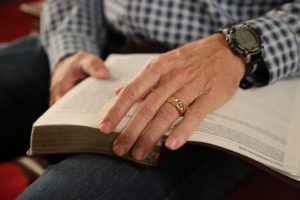 Copies of The One Year Bible were hard to find, but family members met the challenge. Jody passed them out to healthcare professionals and cancer patients, and many promised to start reading. They simply turned to that day’s date and began. Jody gave out over 100 Bibles and was thrilled.

“A doctor’s passion is to study and figure things out,” Susan says. “They shared their passion with Jody; he shared his passion with them.”

Then Jody’s sister Sheila Richey had a brainstorm. Jody had been trying for years to get people to read through the Bible with him, she says, with minimal success. But after Jody’s diagnosis, people began reading the Bible with him to show their support. Doctors warned that Jody might not be alive in a year, but more and more people committed to reading the entire Bible with him in 365 days. 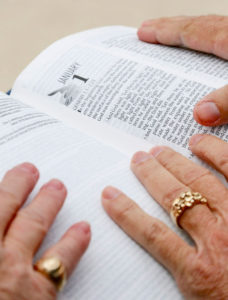 “I’m thinking, ‘Wow, this is great, but there’s got to be a more efficient way to do this,’” Sheila says. She told Jody, “If we could start a website, you could hand out a card and invite people to do it digitally, and you could invite more people.” Although admittedly challenged with computers—“I can barely email people,” she laughs—Sheila managed to create jodysbiblejourney365.com. “I was desperate to help my brother have his heart’s desire,” she says.

While Jody hoped to gain 10 followers, Sheila’s goal was loftier—she wanted 50. The website did not ask for donations. It did only one thing—ask people to read the Bible every day, giving them links or emails so they could easily accomplish the task. Many people predicted a lackluster response. They were wrong.

“Before we knew it, we had 50. Then we got 100, then 200, and the number kept growing and growing. We had over 600 people committed on the website,” she says. “They joined to show Jody support, but they didn’t realize they were getting something so much more valuable for themselves. I have never heard of anything like it. I don’t know that it could be duplicated. It’s a real miracle from God.”

Although a diagnosis of cancer is never welcome, Jody has found that much good has come out of his disease. For one, it has made him value his relationship with Susan even more than before. Once classmates at Kilgore College and Texas A&M University, the couple has been happily married for 30 years. “Financially, we did not need each other,” Jody says. “But all of a sudden, I couldn’t put my clothes on. I couldn’t give myself a shower. She was at the hospital every minute I was there. I told her several times to go home and get some rest, but she would not leave my side. I learned that she would stand by me no matter what. When things were thick, she was there.”

To date, Jody has defied the odds—his cancer has not returned. “We give glory to God for that,” he says. “Susan and I both believe that God is the Great Healer.”

Furthermore, Jody’s life finally has purpose. After graduating from college, he aspired to attend seminary, but was denied acceptance because he couldn’t vocalize his plans for ministry. Years later, he believes he has found his calling.

Soon, jodysbiblejourney365.com will become familybiblejourney365.com to take the focus off Jody and place it with families. “It’s not about me,” Jody says. “I’m just a regular guy. I’m not anything special in the eyes of society; but, in God’s eyes I am, and so are all of you.”

Jody has great hope for the future. “I don’t drink, I don’t smoke, and I don’t chew tobacco. I exercise regularly and have for years. Even doing all that, I still got cancer, but God has used that to his glory with the Bible journey. Over 1,000 people read the Bible with us this year. Will you come read this year with me?” he asks. “We will both get a blessing from it; I promise.”