As the driver pulls the vehicle into the driveway, her passenger confirms that they are at the right address by noting a pile of used blankets, pillows, and towels on the front porch. He loads the items into the back of the vehicle, promising the homeowner that the donation will be distributed to an animal shelter, an animal rescue, or a family that fosters animals. It’s a scenario that happens once or twice a week in the Montgomery area, and sometimes at homes as far away as Houston. 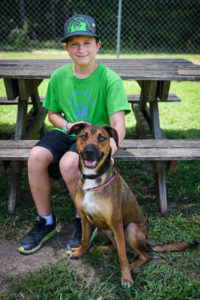 What makes this transaction unusual is the fact that the organizer of this philanthropic effort is Jayson Kimberly, a 12-year-old seventh grader at Montgomery Junior High. He lacks a driver’s license, so his chauffeur is his proud mother, Kim Kimberly. Local animal lovers have been impressed with Jayson’s love of animals and his selfless dedication to helping them, and they have lavished him with all sorts of praise. “One thing that stuck out to me was one person named their dog after me,” Jayson says with a grin. 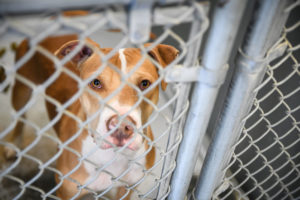 Leave it for the Pooch

It all began about a year ago. Jayson had attended a summer camp sponsored by Education in Action for two summers and aspired to be a part of its alumni council during his third summer. Education in Action, which strives to help young people become informed, active community leaders, requires each prospective alumni council member to conduct a service project in his or her community. Faced with incalculable options, Jayson followed his heart. His family has five dogs (two Weimaramers, two great Danes and an English mastiff) and three cats (two Siamese and a Maine coon). He often saw commercials on television that featured sad dogs in need of assistance, and it sparked an idea. 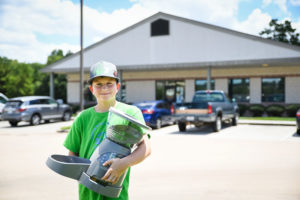 “I really wanted to help them,” he says, “so I came up with an idea to collect donations to help dogs—and really all animals.” Because he planned for people to leave donations for him to pick up, and because he figured the donations would primarily benefit dogs, he named his initiative Leave it for the Pooch. Kim helped him create a Facebook page and, to jump-start the project, she began messaging her friends.

Jayson hoped only for small donations, so when his first respondent contributed 70 leashes and harnesses, he was astonished and encouraged. If one person could provide such a generous donation, he could scarcely imagine the vast amount he could collect if many people chose to support his cause. Countless dogs might be helped.

Sure enough, as people “liked” the Leave it for the Pooch Facebook page and shared it with their friends, the page garnered hundreds of followers. While most were from the Lake Conroe area, some lived outside the region and even out of state. More and more people messaged or commented on the Facebook page—which Jayson and Kim monitored closely—and donations were continually picked up and distributed. Donors and recipients also used the Facebook page to leave comments and compliments for Jayson. “Jayson, you are an amazing young man and superhero to many animals,” one person commented. Another wrote, “You are ahead of your time,” while another commented, “I am proud of you, Jayson. . . Keep up the good work!” 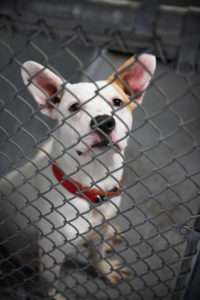 And Jayson did. The first animal he helped was a rescue dog named Booker, who had to undergo the amputation of one of his legs. (Today, Booker has recovered and has been placed in a loving family that owns other dogs.) Meanwhile, Jayson continued to pick up countless donations, which he delivered to shelters, to rescue operations, and even to some families that foster animals. Among the many organizations that have benefited from Leave it for the Pooch are the Conroe Animal Shelter, Rita B. Huff Humane Society, Brenham Animal Shelter, Aggieland Humane Society, Shenandoah Shepherd Rescue, Who Rescued Who, Weimaraner of Texas Rescue and Camo Rescue.

“It just grew,” Kim says. Because donors seemed to appreciate being able to see where their items were distributed, she began posting photos of both pickups and deliveries on the Leave it for the Pooch Facebook page. She also tirelessly continued to provide transportation for pick-ups and to deliver donated items, and helped Jayson secure a drop-off location at Elite Repeat, a resale shop located near Magnolia Diner on Highway 105 West. “If he is doing good for others, I want to support that,” she says. “The least I can do is drive him to a pick-up.” 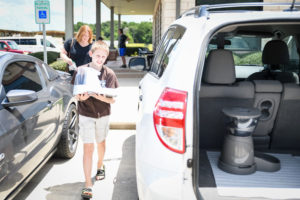 In addition, Kim enlisted the aid of good friend Carrie Hulon, who is pleased to be able to help Jayson and his animal beneficiaries. “People want good in the world, and they want it from the young people, because they are our future,” Carrie says. “To see anybody’s kids succeeding and seeing them do something for someone other than themselves is very rewarding.”

During the school year, Jayson does most of his work with Leave it for the Pooch on weekends, because his schedule includes a head-spinning assortment of activities. He is active at Montgomery Church of Christ and competes with (and is the vice president of) Montgomery County 4H’s Shooting Sports Club. He takes honors courses at Montgomery Junior High, where he is a member of the National Junior Honor Society, is on the student council, and is a member of the band and the cross-country team. It makes people wonder how he manages such a busy schedule. Jason shrugs. “We just kind of wing it,” he says.

As Jayson’s project grew, some people wanted to donate money rather than pet supplies. So, Jayson created a fundraising effort, which he called Pennies four Paws. His Facebook page, Leave it for the Pooch, directs people to GoFundMe, where they can safely donate. One of the ways Pennies four Paws has used monetary donations is to help defray the cost of veterinary care for sick and injured animals.

The philanthropic endeavor has also grown to include the sale of Leave it for the Pooch ball caps and T-shirts. Kim’s friend Carrie makes the T-shirts herself, and all proceeds over cost are donated to Pennies four Paws. Kim hopes that Pennies four Paws will one day become a non-profit organization.

“He connects with the animals”

Jayson’s parents, Kim and Jay Kimberly, are understandably proud of their son. “He has gotten so many compliments,” Kim says. “One person said, ‘If more people were like you, the world would be a better place.’ Instead of doing what kids do on the weekend, he is picking up donations for injured animals. How can I not be proud?” 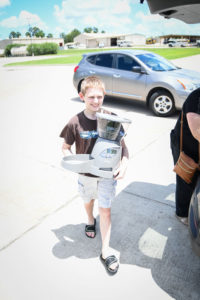 Although Kim isn’t sure what direction Jayson’s service project will take when he is older, she knows it has been a rewarding experience. “He is growing from it,” she says. “I think it’s a great thing.” Meanwhile, Jayson wants to continue his work with Leave it for the Pooch and Pennies four Paws well into the future and has no plans to stop. “I am an animal person, and I love to help animals,” he explains. His long-term goal is to attend Texas A&M University’s College of Veterinary Medicine to become a veterinarian, and he has already visited the college. His educational and career goals come as no surprise to his parents. “He connects with the animals,” Kim says.

For more information about Jayson’s projects to help animals, visit his Facebook page, Leave it for the Pooch. To schedule a time for a donation to be picked up, message the page administrator (Kim). In addition to items such as dog food, cat food, pet toys and supplies, Leave it for the Pooch and its beneficiaries appreciate donations of cleaning supplies and paper towels, as well as used towels, sheets, blankets and pillows. To make a monetary donation, search for Pennies four Paws on GoFundMe.com.