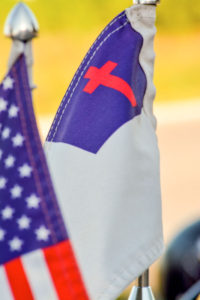 When Greg Dickinson was a high school student in Littleton, Colorado, he rode a motorcycle to school. “That was my transportation,” he says. “I didn’t have a car until I was a senior. I rode when it was 15 degrees outside, with snow on the ground.” He continued to ride motorcycles while he was a student at Howard Payne University and after he entered the work force, finally taking a hiatus when his second child was born. In 1999, after his children were grown, his brother encouraged him to begin riding again by finding just the motorcycle that he knew Greg would want. “He told me, ‘It’s at my house. Come get it,’” Greg says.

Two years later, Greg was looking for a motorcycle group to ride with, but didn’t want to join a club that socialized at bars. When he heard about Christian Motorcyclists Association (CMA), he said, “That sounds good to me.” He and his wife Cheryl, a teacher at Montgomery High School, joined CMA right away. Today, Greg is president of the Conroe Chapter of CMA, and the Dickinsons think of their friends from CMA as family. They ride with them, travel to motorcycle rallies with them, attend Bible studies and socials with the chapter, and serve and minister to the motorcycle community with CMA. “It’s not so much the destination as the trip,” Greg says. “But it’s not just a ride group. It’s all about ministry.” 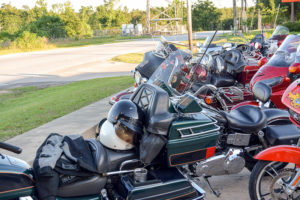 A father, a son and two motorcycles

CMA traces its origin to the purchase of two motorcycles in 1972. When Herb Shreve’s teenage son asked for a motorcycle, Herb, the pastor of a church in Arkansas, resisted because of safety concerns. However, when he saw several fathers and sons riding together, he bought two motorcycles in hopes of improving his relationship with his son. During the next few years, father and son saw thousands of motorcyclists at rallies, but realized there was no organization that ministered to them. In 1975, Shreve left the pastorate and began working full-time to start an interdenominational group with the goal of evangelizing the nation’s motorcycling community. 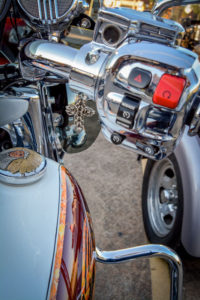 He called it Christian Motorcyclists Association. Today, CMA is an international organization with over 1,000 active chapters in the United States alone. When Greg joined in 2001, he became member number 85,223. Today, he says, there are more than 180,000 CMA members.

“In the last 12 years, CMA has grown by leaps and bounds,” says Vernon Osborn, a past president of the Conroe chapter and now a state coordinator who oversees the southeast region of Texas for CMA. “We are an international organization,” he says. “We have chapters in 36 countries, and we have a presence in 196 countries.”

Each chapter has its own name, such as the Pavement Apostles of Huntsville, the Iron Horse Beacons of Brenham and the Righteous Riders of Pasadena. Conroe, CMA’s chapter 362, founded in the early 1990s, is named the Messengers. Although Vernon stays in close contact with the 28 chapters of the southeast region of Texas, he is especially fond of the Conroe chapter. “I am partial to the Messengers,” he says. “It’s a strong chapter. They have the vision of what we are about.” 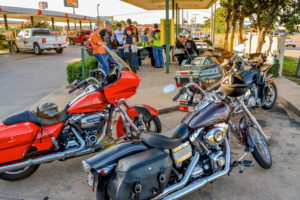 This vision is summed up in CMA’s mission statement: “Changing the world, one heart at a time.” A quick peek at the Messengers’ calendar shows a busy schedule of events. There are rides and rallies on many Saturdays, monthly Bible studies, and “bike nights” at Sonic, motorcycle shops, and other locations. The Messengers also have a prison ministry team, which conducts church services for offenders in the Texas Department of Criminal Justice.

“Sometimes, we have been able to take our bikes into the units, and the inmates are curious,” says Charlie Fields, who is an active member of the Messenger’s prison ministry team. “They are looking for something to break the monotony of being inside. The bikes give us a way to start a conversation. It gives us a great platform to say, ‘This is who we are, and we are here because we care about you.’”

While CMA members attend some Christian rallies, they also participate at secular motorcycle rallies, and interest in the CMA’s message, Greg says, has been widely well-received. Rather than being pushy, CMA members quietly exhibit godly behavior. “We have to earn their respect,” he says. In some cases, rally promoters have come to respect CMA so much, chapters are invited to work at the rallies. For example, organizers of the giant Lone Star Rally in Galveston regularly ask CMA to handle parking lots—a job that requires the collection of money. “We have earned the right,” Greg says. 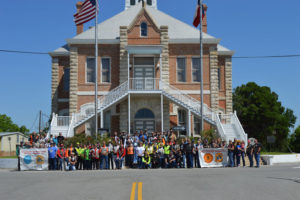 The main event for CMA chapters everywhere is the annual Run for the Son. On the first weekend of May each year, chapters from around the country participate in local 100-mile rides to raise money for the various evangelistic projects CMA supports. Twenty percent of the money generated through Run for the Son goes to Open Doors to purchase Bibles for Christians in other countries. Twenty percent also goes to the JESUS Film Project, an organization that produces films about the life of Jesus in more than 1,500 languages. Another twenty percent goes to Missionary Ventures to provide transportation for pastors so that they can minister to the congregations of their remote churches throughout the world. The remaining 40 percent of the funds that are raised through Run for the Son is used to reach motorcyclists throughout the U.S.

The 2016 Run for the Son raised over $4.4 million. (The proceeds from the 2017 event are still being calculated.) It’s easy to see the impact of this fundraising effort by noting the results of CMA’s partnership with Missionary Ventures. During the past 30-plus years, proceeds from Run for the Son have funded the purchase of 6,803 bicycles, 6,147 motorcycles, 36 horses, 34 boats, three horses and buggies, two snowmobiles, and one camel. 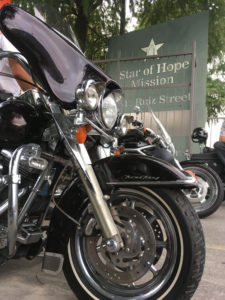 Several years ago, Terry Strack, the bi-vocational pastor of Gideon Baptist Church near I-45 and Loop 610 in Houston, was experiencing tough times and was considering leaving the ministry. About that time, Vernon, his brother-in-law, invited him to attend a CMA function, but Terry objected. “I didn’t own a motorcycle and hadn’t in a long time,” he says. Vernon, however, persisted. “The motorcycle is a tool; that is all they are,” Vernon says. “You don’t even have to own a motorcycle to be a member. But we use the motorcycle to reach a lost and dying world at motorcycle rallies.”

Finally, Terry agreed to attend. “I went, and it was one of the best things that ever happened to me,” he says. “CMA has really been a blessing to me.” He has since been instrumental in organizing the Messengers’ involvement at his inner city church. In addition, members go with Terry when he volunteers at church services at the Men’s Development Center and the Women and Family Emergency Shelter of the Star of Hope Mission, a Christian organization that helps Houston’s homeless people.

There are plenty of activities to keep members of the Messengers busy, but sometimes, they simply want to enjoy one another’s company and talk about their shared interests. On a recent “bike night” at Sonic on Highway 105 West, chapter members arrived on their motorcycles at about 7 p.m., ordered burgers, fries and shakes, and found spots around picnic tables. Long after the food was gone, the members lingered. Conversations, punctuated with occasional laughter, lasted until well after dark.

For more information about the Christian Motorcyclists Association, visit its website (www.cmausa.org).