Trending
You are at:Home»Features»Get Away»Gotta Get Away? Red Rock Canyon, Nevada
By Wes Altom on April 28, 2018 Get Away

Just a short distance from the lights, noise, and nightlife that is Las Vegas is a lesser known, but valued national treasure. Take time away from the Strip for a short drive and visit, and you will hit the “jackpot” in appreciating a different kind of life—nature at its best. 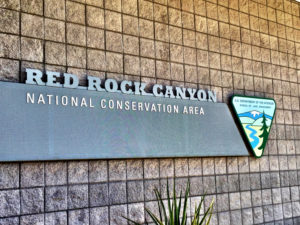 Red Rock Canyon is located 17 miles west of the Las Vegas Strip on Charleston Boulevard/State Route 159. In marked contrast to a town geared to entertainment and gaming, Red Rock offers enticements of a different nature, including a 13-mile scenic drive, miles of hiking trails, rock climbing, horseback riding, mountain biking, road biking, picnic areas, nature observing and a visitor center with indoor and outdoor exhibits as well as a book and gift store operated by the Red Rock Canyon Interpretive Association, a non-profit group with the mission of researching and sharing interpretive information about Red Rock Canyon National Conservation Area and assisting the Bureau of Land Management with endeavors related to interpretation. 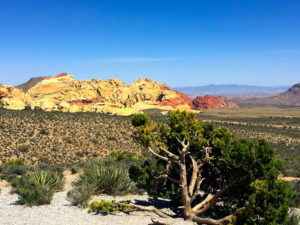 The unique geologic features, plants and animals of Red Rock represent some of the best examples of the Mojave Desert. In 1990, special legislation supported by the Nevada congressional delegation, changed the status of the Red Rock Recreation Lands to a National Conservation Area, the seventh to be designated nationally, and Nevada’s first. This legislation provides the funding to protect and improve the area. RRCNCA is enjoyed by the local population as well as visitors from the United States and many foreign countries. Two million visitors each year enjoy the spectacular desert landscape, climbing and hiking opportunities, and interpretive programs sponsored by the BLM. The BLM is the largest administrator of public lands in the West. It adheres to the policy of multiple use, thereby providing recreational opportunities, protection for cultural sites, and the management of natural resources, including wildlife. 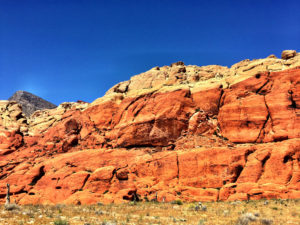 The conservation area showcases a set of large red rock formations: a set of sandstone peaks and walls called the Keystone Thrust. The walls are up to 3,000 feet (910 m) high, making them a popular hiking and rock climbing destination. The highest point is La Madre Mountain, at 8,154 feet (2,485 m).

The great sandstone cliffs at Red Rock, thousands of feet high, are made up of the Aztec Sandstone. This formation, about 180 – 190 million years old, is comprised of lithified sand dunes that formed in a vast desert that covered a large part of the southwestern United States during the Jurassic time. Lithification is the process of changing unconsolidated sediment into sedimentary rock. Massive cross-bedding, typical of aeolian (wind) deposits, is a result of the shifting wind direction across the Jurassic dune field, and is seen in the Aztec Sandstone rock outcrops. 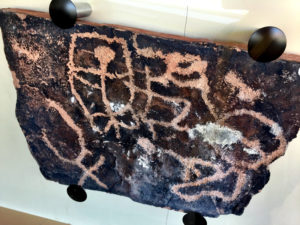 Exposure to the elements caused iron minerals to oxidize or “rust,” resulting in red, orange, and brown-colored rocks. Areas where the rock is buff in color may be places where the iron has been leached out by subsurface water, or where the iron oxide was never deposited.

Red spots in the Aztec Sandstone are iron concretions, where subsurface water has precipitated iron oxide around a nucleus in the sandstone. These concretions are more resistant to erosion than the surrounding sandstone, and weather into little balls known as Indian or Moqui Marbles. 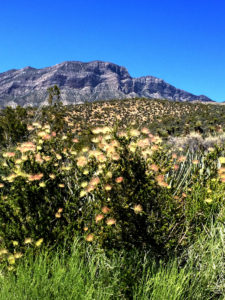 More than 500 million years ago, Red Rock Canyon NCA was at the bottom of an ocean basin. Mostly limestone (and dolomite) accumulated in this ocean basin for over 250 million years during the Paleozoic Era. The limestones contain the fossils of sea life that flourished during that time. Thousands of feet of the gray Paleozoic limestones are exposed at La Madre Mountain to the northwest of the Scenic Loop Drive.

The tracks of small bipedal (two-footed) therapod (meat-eating) dinosaurs have been found in the Aztec Sandstone at Red Rock Canyon in three different places. The small animal tracks made by proto-mammals, early mammals, and arachnids (spiders and scorpions) were also found. Paleontologists are still researching these sites. 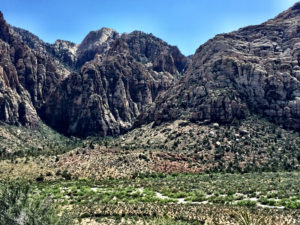 As you look at the escarpment to the west, you see older gray Paleozoic limestone resting on top of the younger buff and red Jurassic sandstone. This is a result of the Keystone Thrust Fault. Near the end of the Mesozoic Era, about 65 million years ago, the oceanic plate began “subducting” (moving beneath) the western edge of the North American Plate. This resulted in the intrusion of the Sierra Nevada granite batholith, which set up compressional forces in the Earth’s crust that caused the older limestone to be thrust east up and over the younger sandstone. The limestone cap served to protect the weaker sandstone from erosion for millions of years, eventually eroding back to its present location. The compressional thrust faulting at the end of the Mesozoic Era can be traced all the way up into Canada. However, the best exposure of the thrust faulting is here in the Red Rock Canyon NCA. 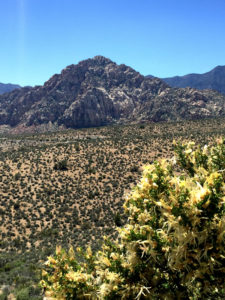 Some 600 species of plants are known in the area. Common types in the valley floor include the Joshua tree, Mojave yucca, banana yucca, creosote, and blackbrush. Higher up, the Utah juniper and Sonoran scrub oak (also called scrub live oak) come to dominate. Agave is easy to spot in red rock niches, with its thick low leaves and flowering stem that reaches twice the height of a man. The Calico Tanks trail has a plaque about prehistoric agave roasting pits. Ponderosa pines may be found at the top of the valley, where it connects to the Spring Mountains.

Wild burros are a familiar sight, as are rabbits and ground squirrels. Desert bighorn sheep are occasionally seen at higher elevations. During rare spring and summer rainstorms, tiny red-spotted toads can be seen emerging from pools of water. The Conservation Area is protected habitat for the Desert Tortoise. 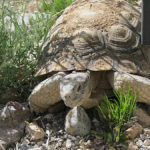 Who is Mojave Max?

Mojave Max is a desert tortoise (Gopherus agassizii) that lives at Red Rock Canyon NCA. Max is a desert “spokestortoise” for all the wild tortoises that live in the Mojave Desert. He resides at the Visitor Center, along with eight females and a large male tortoise named Hugo.

The desert tortoise is Nevada’s state reptile, so Max serves as an important reminder to respect, protect and enjoy all the animals and plants of the Mojave Desert. 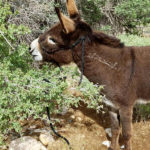 Jackson is a formerly-wild burro who was adopted from the Red Rock Canyon Herd Management Area near Las Vegas in September of 2012. The Red Rock Canyon Interpretive Association adopted him to help with their education and outreach programs. He hosts a Facebook page to keep folks updated on burros, adoption, and appreciating the finer things in life. facebook.com/JacksonTheBurro