Do You Know? Toni McGrew 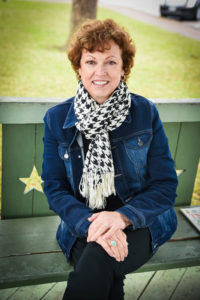 Meet Toni McGrew, a retired nurse, or so it would seem. Not many in that field can ever boast of having had a Top Secret U.S. Security Clearance. Furthermore, her efforts proved invaluable to American troops not only in Berlin, in the heart of the then East German communist regime, but to troops stationed throughout Central Europe during the Cold War.

Where are you from?

I was born in New York in a place called River Head, which is at the end of Long Island. My dad was in the air force, and we just lived all over. I graduated high school in Duluth, Minnesota. But back in that time, I knew I wanted to go to college and find a career and be independent.

This was during the early 70s. So, I just thought to myself that I’m going to just join the army and get the G.I. Bill. I joined what was then called the WAC, or Women’s Army Corps, and went to basic training just outside Anniston, Alabama at Fort McClellan. After basic training, I learned German at the Defense Institute in Washington, D.C. I became a German language radio voice interceptor. From 1973 to 1976, it was a very top secret job. Back then, we were known as the Army Security Agency, or ASA. Today, you may know it as the NSA, or National Security Agency. We monitored the activity of the East German radio transmissions. Back in the 70s, that country was divided; I saw it a few months ago, and it is very different now. Back in those days, we were never allowed to go near the east (East German Border). But, I had the opportunity to view photographs that tell the story—a different world, not vibrant. The Communists really did suppress and have their thumb on the people. The German government this past September sponsored a group of veterans that at one time were stationed in Berlin to speak with a group of high school students in the former Eastern Bloc. We have an opportunity to help relations, as well as educate a new generation to a very interesting period of history. 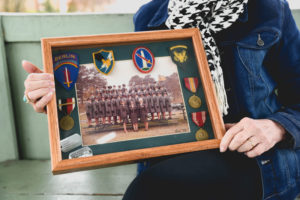 How would you describe the former Eastern Sector today?

They are trying to blend in. There are a lot of the older generation who still have a communist mindset. They still don’t trust anyone, because all they know and remember is that life they have lived. The younger generation is trying to bring in shops and little boutiques and other things that are typically interesting to young people. But, all of that is changed now from the Cold War years. This was once a place that the East Germans would never go near, because they would be shot. Today, it’s an open marketplace with shops, but there are still remnants of the past.

What did you think when the wall came down that at one time divided East and West Germany?

I couldn’t believe it. When I first joined the Army, I was given a choice of which language I was interested in. The Army offered a choice of languages around the world—Arabic, Italian, Spanish… I thought, I’ll learn German, because I thought we would always have troops stationed in Germany. I was there during the Vietnam War years. I knew we would not always be in Vietnam, but I just thought we would always be in Germany. Now, I just can’t believe it; we are not there anymore.

How did you find out about the German Government-sponsored trip for veterans stationed in Berlin?

I found the place on Facebook called Field Station Berlin. Sometimes you hear about it in spy movies involving high drama, intrigue, and espionage, typically to obtain information leading to some military or political advantage. Anyway, I joined and want other Veterans of Field Station Berlin to be made aware of the wonderful opportunity they have to go back and maybe rediscover treasured moments from that time in our lives.

About two or three years ago, I started asking about the trip. They only take twelve, and you must have a doctor’s release stating you are physically healthy enough for the journey. For two years, the slots just filled up so fast that I decided to apply a lot earlier. In the past, I would put it off and procrastinate, then I really got interested. Again the trip was full, but I figured I’d get a jump on the 2017 trip. All one needs to do is get to Germany, and after that, the German Government takes over with a full four day itinerary, complete with schedule and timetables, programs and routes. 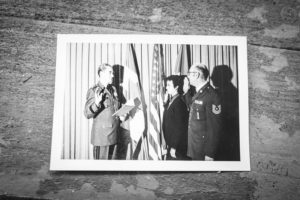 You mentioned 2017, yet you went just a few months ago? How?

Well, around Mother’s Day last year, the coordinator of the trip got in contact with me to inform me that they had a cancellation and asked if I wanted to still go.

I’m sure you told him you needed a few days to think about something so exciting right?

(laughing) I knew I had to make a decision at that moment, because I’m sure that others would be leaping at the chance to go on something so historic. I just said I’m going. I don’t know how, but I’m going to go. I traveled to Italy to visit with friends and relatives and made my way to Germany from there, taking a flight from Rome to Berlin. Once I got there, everything was wonderful.

I had the chance to meet eleven new people who, at various times over the last few decades, had the privilege of being part of the Field Station Berlin.

Some were stationed there back in the early 1960s, when the wall was first being constructed. Others had just left in the 1980s, so we had a very nice cross-section. What I found exciting was that on this trip, there were two other women among us. It was a wide variety of ages as well as occupations, then and now. I met one gentleman who was a provost marshal, now in his late 70s, who lives down in Richmond, Texas, south of Houston. I met another gentleman who was a former military policeman. I ran into four other people who did the job or military occupational specialty that I had. So you know, we had kind of our own language within a language, with code words and everything, because we knew what we did. The Checkpoint Charlie Foundation helped to be our main tour guide. There was always someone to help and answer any questions that you may have as well assist in preventing any awkward situations. Some of our guides were students from the nearby college, doing this as part of their internship. For the first time, I was allowed to see things that I could have never seen before. But, I also had the chance to see my old army barracks. It was sad, like going back to your old neighborhood after you have moved away for a number of years. Things just are not the same as you may have remembered. We had a chance to see an Olympic pool used by Adolf Hitler, as well as view the site of the 1936 Berlin Olympic Games, where Jesse Owens won four gold medals in track and field for the United States.

You only stayed in the Army four years. Did you ever have that college dream come true?

Yes! I later got married, and my husband (who did the same job as I did in the military) got stationed in San Angelo, Texas. Well, they have a school down there called San Angelo State University. I looked through their little catalog and chose to major in nursing. So that is what I became. I never thought of becoming a nurse when I was a little girl. But there I was, and there it was, so I did it. I think I will always value that moment in time in my life when I was one of the many women that were helping to change the world. I never thought of it that way at the time. We go on to other things in life, but you never get over the feeling that during those years, everything you did was important. That time was special. We were young, with our whole lives ahead of us. For many of us, this was our first experience not only away from home, but away from our homeland as well. I was truly honored to help teach others in order to help us all recognize the full worth of the things we hold in high regard.