Do You Know? Matt Martinez 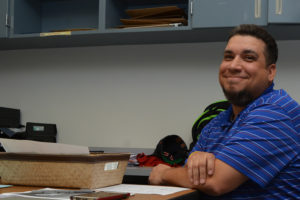 Matt Martinez was a trumpet player in the Lamar High School Band in Houston and excelled at jazz, but it was an English class that gave him the idea to become a band director. While reading The Last of the Mohicans, he noticed that every time music was mentioned, it foreshadowed a major event in the book. He wrote about his observation—one his teacher had never noticed—in an essay. “She absolutely loved it,” Matt says. “I think she held on to it and showed it to the next year’s class.” It was a defining moment: Matt realized that his aptitude for music might be his life’s calling, and he began to think about becoming a band director. Nearly two decades later, after graduating from Sam Houston State University and spending 13 years as a band director in Livingston and Willis, Matt is now the head band director at Montgomery High School. Music has indeed been his life’s work. “I think it worked out,” he says.

What made you decide to join the band program as a student? 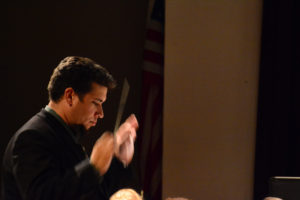 My brother and I are 11 years apart. At the age of 6, I remember going to football games and marching band contest. My brother was a drum major; my dad was the band booster president. My parents came out for concerts and marching contests. They were very supportive of the band. I absolutely loved it. Those are my earliest memories, and I think that’s what later led me to pursue the drum and bugle corps. I grew up on a chartered bus seeing the nation that way. My parents were not band kids, but they really picked up on us being part of something big like the band, and they encouraged what we do, even to this day.

What are your plans for the Montgomery High School Band? 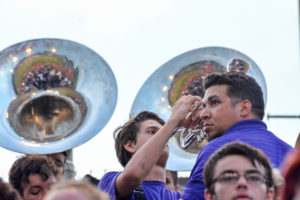 The new high school will open in two years, and I want to grow the program and make it a strong 6A program before we split. I want the person who takes over at the new high school not to have to worry about numbers. My goal these next two years is making sure the students stay interested. We also need to play out in our community more. We need to take the drum line and play at the elementary schools and play at the little league games and let the community see the great work these kids are doing. We have great fine arts programs here. Our drama program placed third in the state last year. The choir program has a long tradition of excellence, and the band is on the right track and picking up steam. It’s not like I walked in here and it’s in distress. They have done a really, really great job. They just needed a head director to come in and take over and keep them in the right direction.

What can Montgomery football fans expect this year at halftime? 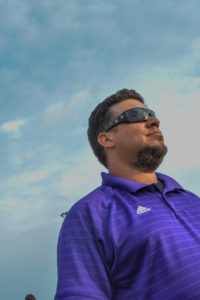 With the equipment we have, we will do very traditional military marching. Our drill writer is a former A&M drum major. Football games are a big community thing. It’s a good rally point. The cheerleaders are there, the drill team is there, the band is there, and (obviously) the football team is there. I don’t think we would be able to do what we do without the Friday night football games. It’s an opportunity to perform our contest show, but at the end of the day, it’s an opportunity to support the kids. One of the things I did in Willis was to play for the boys’ soccer team. I really never knew how much it meant until five or six of those boys found me in the hallway and thanked me. They liked to hear the fight song when they scored a goal. The parents absolutely loved having us there. You expect the band to be at the football games, but I think the football kids and the parents feel the same way. We have a show to take care of at halftime, but we have a job to do for our football team during the game, and I take a lot of pride in what we do.

If I were a prospective band parent, would you encourage me to enroll my children in band?

Band is what kept me in school. I always looked forward to going to school, because I was going to get to be in band. I don’t think I would have been as prepared for college if I hadn’t been in band. I had to figure out how to study for my algebra test and be at band rehearsal. It really helped me prioritize my time and get focused, because I had to pass to be eligible. Being in band there is a lot going on, and it helps students to align their priorities. As an adult, that’s a hard thing for us to do. What comes first? There are going to be some sacrifices, but what’s most important to you? Band may not be the most important thing to them, but when you are here with us, that time is valuable. We always preach they need to be doing something. We want all of them to keep busy. I think that’s what my parents believed in from the beginning. They always knew who I was with. It’s Friday night. It’s September. It’s 10:00 at night. Do you know where your band kids are? Yes. They’re with the band on a bus coming home from a game. 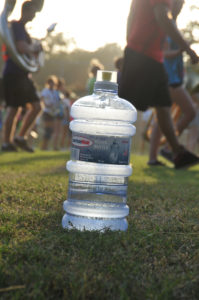 Research indicates that learning to read and play music is good for brain development. Do you agree?

There is a connection with how the brain maps music. You use different parts of the brain. To really be successful as a musician, there is a constant adjustment going on all the time. We play to the strengths and weaknesses of the instrument, because there are parts of the instruments that don’t work as well as others, and you have to make tiny adjustments; it’s changing every second. It’s almost like tightrope walking. Every move they make, it’s a little adjustment. It has been proven that band kids do well in their other classes. They learn to focus, multi-task and solve problems, because that happens all the time in ensembles. They learn self-discipline and how to keep themselves on task. They learn how to process things really quickly. We have found some kids may struggle a little bit in early years, but as they got into band, it helped them concentrate and study a little bit more. You end up getting a well-rounded student by the 12th grade year. Not all our students are gifted and talented, but it really helps them to find their strengths and weaknesses and prioritize, and it helps them be prepared for the real world. For those who don’t end up in music later on, hopefully it will help them out. We always joke and say we are not just band directors teaching music; we are teaching our students to be better adults, better people.

Tell us about a typical year for a band student. 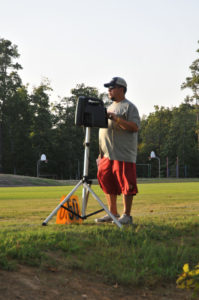 We start a week before August with our leadership team, and then the first two weeks in August we do full band rehearsals from 7 until 4. As soon as school starts, we have after school rehearsals three days a week. The first performance is at the football game on the first Friday of school. We are also getting ready for our contest season to start in October. We have four marching contests we go to in October, including our UIL performance. That is a busy time, because several of those weeks we are doing Friday football games and Saturday mornings getting ready for contests. That’s two long days in a row most weekends. You just kind of put your head down and work until the end. It’s fun, it’s exciting, it’s scary, it’s tiring, but we just don’t stop until we are done. We just rest in November. The last scheduled football game is the first week in November, with playoffs after that. That’s also when the students start to work on the individual region audition process, where they get to qualify for the region band. If they are at the top, they go on to area with a chance to make the state band. During all that, we are getting ready for Christmas concerts. In January, those who want to qualify for the state solo and ensemble contest will be practicing with pianists. The contest is the third week in February. If they make a superior rating, they qualify to go to the state contest in May. During this time, January through March, all three bands will be doing after school rehearsals to get ready for the UIL concert contest at the end of April. Then, we will hopefully be going on our spring band trip. That may be another contest as well. That’s the reward for the two semesters of work. Right as that ends, we will start getting ready for marching band for the next year. We will get the eighth graders over to the high school and introduce them to marching. It’s not easy, but they will get the hang of it. We will have our spring concerts. We will listen to the kids audition for bands, and they will try out for drum major and leadership positions. We have spring graduations, and school ends, and we will start the process over again. 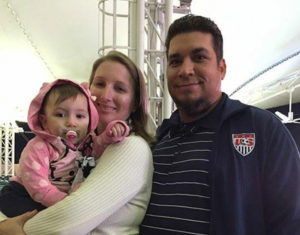 Whew! Do you have any spare time?

My wife Dawn is associate director of bands at Conroe High School. She writes a lot of percussion music for the Conroe marching show, and I will start to write her contest drills. When we are home, we are still working. We have a 19 month-old girl, Maricela. They will change your life real quick, but it has been a joy. My wife and are avid cyclists, and we also both play with the Houston Texans Pep Band. It’s our 11th year.

I guess we will take that as a no!

Tags:
Previous Article
Do You Know? Dr. Everett Wilson
Next Article
Taking in the Sunshine