Do You Know? Lanier Stevens 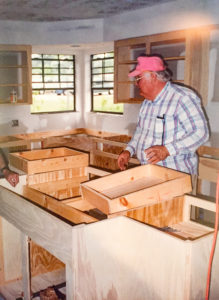 When Lanier Stevens says he built a house, he often means that he built it with his own hands. When he says he is a musician, what he means is that he is a pianist, a guitarist, a guitar teacher, an acapella vocalist, and a prolific songwriter. And when he says he is a pastor, he means that not only has he preached for 56 years, but that he has also served as a minister to anyone who was on the rural mail route he carried for 31 years. He figures those people need a pastor, too, so he has always been happy to help when a clergyman is needed for weddings or funerals. He has literally lost count of the number of funerals he has preached during his lifetime. 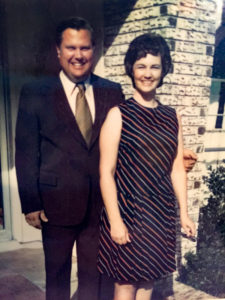 It might seem likely that the son, grandson, and great-grandson of ministers would ultimately become a pastor, especially when that person possesses the gift of gab, a heart for service, and great musical talent; however, Lanier never planned to go into the ministry. He was entertaining an offer to become a professional golfer when his brother invited him to speak at a church in Madisonville. Before he knew it, he had preached at not one, but four churches. Meanwhile, he worked for the U.S. Postal Service and became a homebuilder in his spare time. He likes to say he is “tri-vocational.”

The stories of Lanier’s selfless acts of service are seemingly endless. “I don’t think he has a selfish bone in his body,” says Tanya Parrish, niece of Lanier and Betty Stevens and a member of his congregation. People often tell Lanier, “Preacher, you need to slow down. You try to do too much.” But Lanier, who will turn 76 years old on June 11, still tirelessly responds to anyone who needs help. 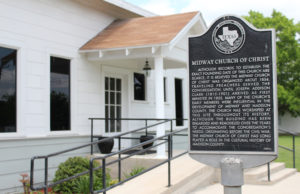 Why did you switch from golfing to preaching?

I was on the golf team at San Antonio Junior College, and we won the junior college championship. I had an offer from the Spalding Company to go into an apprenticeship program with them to play professional golf. I was a pretty good golfer back then. My average was between 70 and 73, and a number of times I shot in the 60s. I was so strong that I could drive a ball 300 yards, which was uncommon back then. My dad, being a preacher, couldn’t bear the thought of me playing golf on Sundays and not being in church. My older brother R.J. was preaching at the Church of Christ in Madisonville, and he knew our parents’ concern. He said, “If you come to Madisonville, you can go to Sam Houston (State University), and there are some girls in our church I would like for you to meet. You can go with me to the little Mount Tabor church. They might want you to preach there.” The girls interested me more than the preaching.

I’ll bet you liked one of the girls.

On August 20, 1961, I preached my first sermon, and I was standing at the top of the stairs as the teenagers were coming out of their Sunday school class down in the basement. Then this girl came out. She had coal black hair and a red dress on. Prettiest girl I ever saw in my life, but she was going to the University of Texas. That evening after church, I invited her to go to the Dairy Delight. She tells it like I talked about getting married that first night, but it didn’t take me long! That was August, and I talked her into marrying me on January 27.

I was going to school at Sam Houston, working at Carter’s grocery store, and preaching out at Mount Tabor. Paul Manning, who grew up in the Mount Tabor church, was superintendent of schools in Quitman, Texas. He had heard me preach several times and said, “Why don’t you come to Quitman and preach for us?” He kept insisting, so in May when school was out, we loaded up and moved to Quitman. I preached there for four years before we came back to Midway. 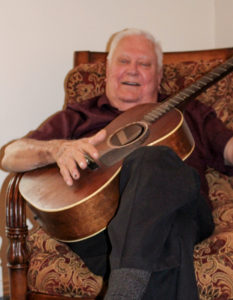 I hear you have some good stories about your old guitar.

My dad helped me learn to play the guitar. We’d bought an old guitar at a pawn shop. It was painted black, but it sounded real good. When I stripped the paint off, it was a Gibson guitar. While I was in Quitman, I played my guitar at nursing homes and that sort of thing. Some parents asked me if I could teach their kids to play.

Is it true that you taught Sissy Spacek to play?

The first thing I knew, I had 14 students. I charged them a dollar a lesson. They loved to play as a group. There was also one lady, about 38 years old, named Jo, who was kind of a hippie type. She wanted to learn to play, so I taught her, too. She lived right behind Ed and Virginia Spacek. Jo and Sissy were buddies. Sissy ordered her own $15 Silvertone guitar from Sears and had it delivered to Jo’s house. 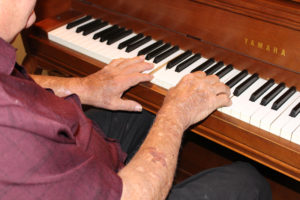 She had been taking lessons about two months and quickly became my best student. She was on fire with learning to play. I saw her dad downtown one day and said, “Sissy sure is doing good on the guitar.” He looked at me almost in shock and said, “What guitar?” I didn’t know it, but she was practicing over at Jo’s house. He said, “Her mother told her she couldn’t take guitar lessons. We bought her an organ and were taking her all the way to Winnsboro for organ lessons, but she wouldn’t practice!” Sissy went through high school at Quitman High School and was very popular. When our daughter Karen was a baby, Sissy was her first baby-sitter.

Pastoring a church is usually a full-time job, but you had three jobs?

The church was paying me a minimal amount, so I knew I was going to have to supplement my income some way or another. First, I bought a filling station in Midway, then sold it in 1967. That year, I got my first job as a career “sub” in the post office, which later led to my rural carrier job. That same year, I began working with Vick Lumber as a carpenter/helper. My dad had taught me a lot about carpentry. Then I launched out and built some houses on my own; after I retired from the post office, I started doing it in earnest. My son Jon is now an awesome builder in his own right. 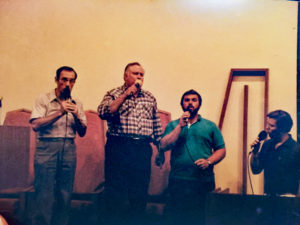 And I’ve heard you also sang with an acapella gospel quartet?

The Sounds of Glory got together in 1981 at the Conroe Church of Christ, which was then located on Frazier Street. We sang together for 28 years and recorded 20 albums. Nearly all of the albums have a song or two that I wrote or contributed to. You can go to thesoundsofglory.org and go to “albums.” All 20 of them are listed. You can pick a song or download the whole album at no charge. 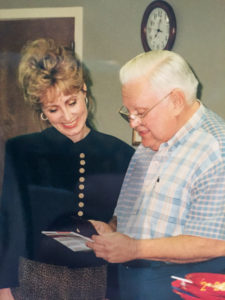 Tell us about some of the memorable moments of your ministry.

When I got that job with the Midway Post Office, there were two women there who were among the finest Christian ladies I’ve ever known. They loved the Lord, and they loved their families. They were involved with their churches, Methodist and Baptist. But there I was, a Church of Christ preacher, raised to think we have all the answers. About that time, Martin Luther King delivered his “I have a dream” speech. I began preaching that I have a dream that one day you could drive into towns and wouldn’t see people divided by denominations anymore. You might see a bunch of church buildings, but with signs that said, “Christians worship here.” About 20 years ago, the preachers in Madisonville began meeting and praying together on Thursday mornings, and we also started our “fifth Sunday gatherings,” which is a combined worship service we rotate among churches on the fifth Sunday night when there are five Sundays in a month.

Another thing that came about through our preachers’ association is The House of Hope. I had started going to the jail to teach Bible classes, and I told the guys in our prayer meeting that we needed to reach out to people who are dealing with drug abuse and addiction. Often, I’d have 20 or more men in that jail class; when they got out on probation, they really needed help starting new lives. From our preachers came the dream of the House of Hope. We started in the old health clinic behind North Madison Church of Christ. When we heard that the school board was debating about what to do with the old Marian Anderson School, we talked to the school superintendent about buying it. Everybody had to pick up a bid packet, and five were picked up. I said, “In order to know that God wants us to get it, why don’t we just bid $101?” The superintendent couldn’t get over it. He said, “Of the five picked up, y’all’s was the only packet that was turned in.” We restored it as a residential treatment facility. Guys come free of charge. Nearly all of them have been in jail dealing with drug addiction. We ask them to commit to living there for one year. After three months, they start going out on work details. Whatever money they make goes into a trust fund for them. If they stay the full year, they get that money they’ve earned back, with interest. 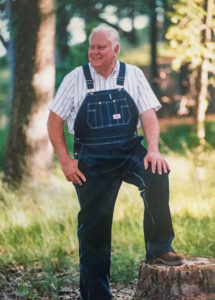 Always one to help his daughter with anything, Lanier modeled overalls for a Father’s Day ad!

In a way, you’ve been a minister to the whole community!

People that were on my mail route called me “The Preacher.” Then, because my wife Betty was part of the Farris family (and there are so many Farrises in Madison County), I was either kin to them through the Farrises, or I was their mail carrier, or I was already their pastor. If I was their mail carrier, they looked on me as their preacher. This is why I have been called on so many times.

I really do. I love this community, and I love the people in this community. Betty loves to travel, but I am not much of a traveler. I like being home. When we moved back here in 1966, Mr. Fred Riley was in his late eighties, and he had a saying I loved, “When you leave Madison County, you’re just camping out.” I feel exactly the same way.

Tags:
Previous Article
A Day in the Life: Nettles Stirrups
Next Article
Do You Know? Harold Hutcheson