Do You Know? Harold Hutcheson 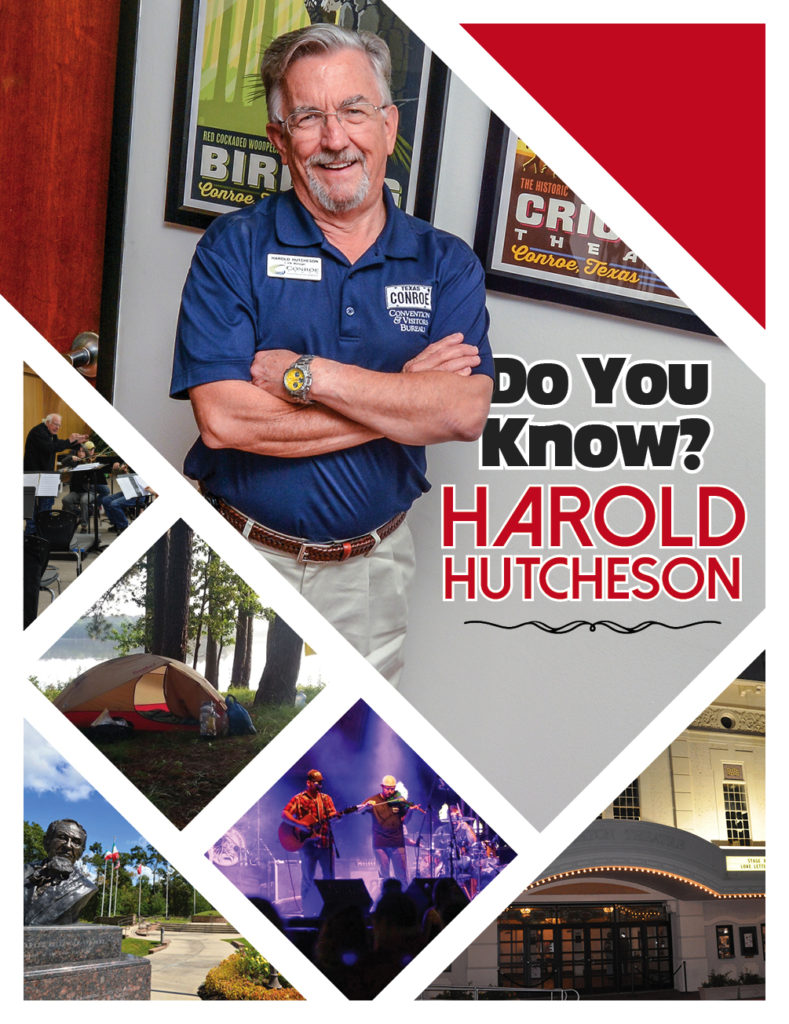 As any long-time resident can tell you, Conroe used to be a sleepy little town, known mostly for its proximity to Houston. Boy, have things changed! Both the economy and the population of this area have absolutely exploded over the last decade. Conroe is now becoming known as a hotspot for vacationers. It is a virtual playground for the sportsman and outdoorsman and constantly growing as a Mecca for live music, arts, entertainment, and fine dining. No one knows that better than Harold Hutcheson. Harold, called “Hutch” by his friends, is employed by the City of Conroe to bring people to the area to vacation or to conduct business. He is the manager of the local CVB, or Convention and Visitors Bureau. It was a real delight to talk to him about his job, as his absolute love of Conroe, Texas and its rich history just shines through.

Are you originally from this area, and how long have you lived here?

I grew up in Lufkin and have always lived in this general area. I’m a fifth generation native East Texan. My family came to Texas when it was still a Republic. My great, great—I’m not sure how many greats—grandfather was traveling with his brother and several other people through the area by wagon train. The Republic was giving away land grants, and they were headed to the Waco area to find a place to settle. When they came to what is currently the Trinity county area, my great, great-grandfather stopped and decided that was where he wanted to lay claim. He drove a wooden stake in the ground by a spring and stayed; that land is still in the family, and Texas is in our blood. We still have the old land deeds from the Republic of Texas. So, I’ve been here a long time and very proud of it. I’ve always taken great pride in being a native Texan. 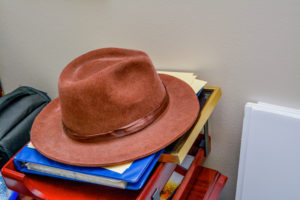 It’s obvious you love Texas history; tell us about that.

I absolutely love Texas history and am very proud of our culture. We are so rich in Texas history right here in this area, as Conroe is a hub of the founding of Texas as a state. San Felipe de Austin, west of Houston, is where the Austin colony was formed. There’s Washington-on-the-Brazos, just west of us, where the Texas Constitution was signed, and you can go south to San Jacinto, where we won our independence. Right here in Montgomery, Dr. Charles B. Stewart designed the Lone Star Texas flag, one of the five most recognized flags in the world. Up north in Huntsville, you find the hero of the battle of San Jacinto, our own Sam Houston. He was also president of the Republic and served as the governor of Texas. We are right in the middle of it, and as far as Texas history goes, it all got started right here.

Tell us about your family.

I married my junior high sweetheart, Peggy. We started “dating” when she was 14 and I was 16, if you want to call it that. It was basically my dad driving me to her house, picking her up, and we would go play putt-putt golf. At the end of the date, he would sit in the car and rev the engine while I shook her hand goodnight on the front steps. We’ve been married since 1970 and have two grown sons, Matthew and Allen. We also have three grandsons aged 9, 4, and 2. Being a grandpa is really fun. 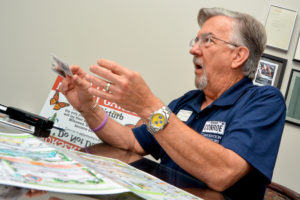 What is your education and work history? How did you come to be the CVB manager in Conroe?

I have a marketing and graphic art background. I took my art training at the University of Houston. I always knew I wanted to have a creative job, and I have been fortunate enough to work for several advertising agencies. After graduating, I managed to land a job with Ogilvy & Mather advertising agency, which had just opened an office in Houston. It was one of the largest agencies in the world, based out of New York. I worked there for 20 years. I did a lot of traveling all over the world for that company. I also worked out of the New York, Dallas, and Los Angeles offices, but only on assignments. I never had to move away and leave my love of East Texas.

After I left Ogilvy, I opened my own agency in the FM1960 area. While there, I started doing some work for Sam Houston State University, which led to some marketing work for the City of Huntsville. Eventually, after seven years, I closed my agency and went to work directly for Huntsville, helping to market their historic district. After five years up there and serving on their Convention and Visitor Bureau board as their marketing adviser, I found out this job in Conroe was open. I didn’t have enough confidence to really think that I would land the job, but I interviewed anyway. I couldn’t believe it; the phone rang two days later, and I got the job! That was in September of 2009, so I have been in this position for eight years. 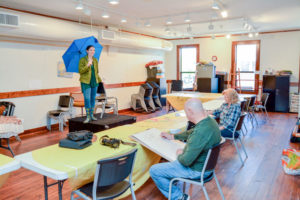 What is the CVB, and what does your job entail?

The CVB, located in the Chamber of Commerce building at 505 W Davis Street, is the advertising agency for Conroe. It’s our job to show the world how amazing Conroe is. We tell everyone and remind them that we’re here in every way we can be for their vacation, event, or business meeting.

What would entice someone to come to Conroe, as opposed to somewhere else?

We have something here for almost everyone. For the businessman, we have convention centers, and we are approached by all kinds of corporate events, annual meetings and things like that.

The Conroe area is rich in Performing Arts. We have the Conroe Symphony. I love classical music and was very involved in the Houston Symphony. So when I first listened to the Conroe Symphony, I was fully prepared to be disappointed, but this little orchestra of ours is big in sound. I went to a performance fully expecting to be let down, and I was blown away. Then we have the Crighton Theatre and the Owen Theater for live performances of music and plays. We also have the Young Texas Artist Series, where they bring in the very best classic talent from the universities and music schools, and they compete on a statewide and nationwide level. 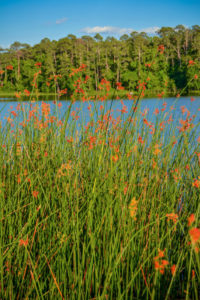 For the outdoorsman, we have Lake Conroe for swimming, boating, and fishing. It brings in all the bass tournaments. We have hosted the Bass Masters Amateur Competition; that brought 112 competitive fishermen here. There were film crews and thousands of spectators. We just finished the Bassmasters Classic. It was so huge that they fished our lake, but they had to have their exhibition at the George R Brown Convention Center in Houston.

Conroe is getting famous for our year round live music. We have the Red Brick Tavern and The Corner Pub that serve food and drink and live music all the time. What used to be Conroe Sparkle Ice House has just reopened and turned into the Pacific Yard House, which will include a steakhouse and music venue. I’m confident it’s going to be top-notch; that will give us three really good full time venues downtown for music and entertainment. We also have Martin’s Event Hall now open. It’s not a full-time venue, but it is wonderful event hall downtown.

What a lot of people don’t know is that birding is huge here. This area is on a converging flight path of two of the major migratory flyways for birds in the United States. The birds that leave the East Coast that don’t fly over the Gulf of Mexico come through here, and all the birds that fly from the Midwest heading back to Mexico for the winter also fly through here. The flight paths converge here, and many people come from all over the world just to see the birds. That’s not to mention all of the waterfowl we have on the lake, like herons and pelicans, as well as the eagles and hawks. We have professional birders that provide tours, and a lot of our fishing guides will take you birding on the lake from the water. 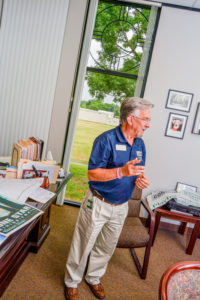 What are some recurring events in the area?

The main annual events are the Conroe Catfish Festival that happens in October. We’ve been doing that for almost 30 years; Kidzfest is a free festival for children that happens every April; and we just had the first annual Conroe Americana Music Festival. We have so much, there are things going on all the time. Right now, we have First Thursdays Concert in the Park. That occurs monthly from April through September and is free to the public.

In the eight years you’ve been CVB Manager, how have you seen Conroe change?

There are new neighborhoods opening up all the time, and now we have Camp Strake turning into this incredible planned community that will include both business and residential as well as retail. On Lake Conroe, there are waterfront businesses popping up all of the time—places to eat, places to play, and places to swim. We have so many full-service marinas around the lake. Conroe is a great draw for people who like to spend time outdoors. 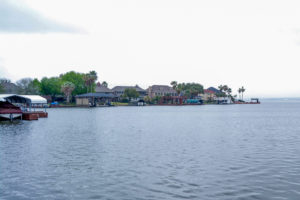 There is Jones State Forest and Sam Houston National Forest, which happens to be home to the Lone Star State Hiking Trail. It is the longest continuous hiking trail in Texas. You can hike all the way from Richards to Cleveland, Texas, a distance of 120 miles through our beautiful piney woods.

Spend any time with Hutch and you can’t help but catch a little of the excitement and love he has for this area. If you are interested in learning more about what Conroe has to offer, take a look at the CVB’s excellent website at www.PlayInConroe.com or stop by the office located in the Chamber of Commerce building at 505 W Davis Street. There are free visitor guide maps, brochures, postcards, and so much more information to be picked up. You can also check out their many social media sites including Facebook at “Visit Conroe, Texas,” on Twitter and Instagram it’s “VisitConroe,” and on Pinterest at “VisitConroeTX.”