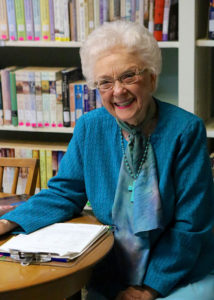 Dr. Bonnie Thorne moved to Huntsville in 1948, at the age of 20. With a husband in college, a newborn at home, a job, and taking classes part-time at SHSU, she arrived in Huntsville with a busy schedule. She’s maintained such a schedule in the community for almost seven decades, earning her Bachelor’s, Master’s, and Ph.D.; working at SHSU well into her 70s; and serving as an active volunteer at the First Baptist Church. Having retired as volunteer librarian at the First Baptist Church, Dr. Thorne has been pondering how to expend her still prodigious energies.

You and Oscar were married a long time, and both of you made strong contributions to the community. When did you meet him?

When I was 7. I started going with him when I was 12, but that meant going to church picnics and that sort of thing. He was two years older than I was.

So you met at church?

Yes. His daddy was our Sunday School Superintendent and Choir Director, and he was a great person. I loved Oscar’s mother and father, and people would say to me, “You just married Oscar so you could have them as a mother-in-law and father-in-law.”

Where did you grow up?

I was born in 1928 in Houston, and I grew up there. In 1945, I went to Lon Morris College, and Oscar and I got married the next year. We both got our associate degrees from Lon Morris and then moved to Huntsville in 1948.

Was it unusual for you to want to go to college?

Before I graduated from high school, my dad was working on a scaffold, and it shifted; he fell and was hurt so badly that he couldn’t work. When I brought up going to college, my dad said, “But Bonnie, you are a girl.” I cried and cried. My mother told me, “You know your daddy wouldn’t tell you that if he had money to send you to school. He’s just too proud to say he’s broke.” Actually, my mother knew the President of Lon Morris was distributing $50 tuition certificates to various churches in Texas, with the idea that the congregation could select a prospective student to receive it. My mother called around to different churches and said, “if you don’t have anyone to give it to, Bonnie could use it.” So, we got ten of those $50 certificates!

What made you decide on Sam Houston?

Oscar’s mother had gone to Sam Houston, and we had heard good things about the school. I got a job at Mallery & Smither Chevrolet, and I worked there for nine years while I was raising our son Corky. Oscar got his bachelor’s degree, and he started teaching school. It took me a while, because we were raising Corky and working. It was so hard to take a lot of classes while doing both, but I finished my bachelor’s degree in 1960 in library science.

Where did Oscar teach?

Oscar taught 7th grade in the building David Adickes now owns. Oscar worked for HISD for about 32 years, first teaching, then as a principal, and then as director of personnel and curriculum. He did that until 1982, and then he served for 12 years as tax assessor collector for Walker County. He felt very honored to have served in both positions.

When did you begin to work at SHSU?

I began working in the Registrar’s Office in 1956 for Mr. Reed Lindsey. He allowed me to go to school while I worked there, so I was able to make some progress and eventually earned my Bachelor’s, Master’s, and Ph.D. I began working in the Library in 1961, and I was offered a teaching job in 1972. It was that same month when Corky was killed.

He was unloading a bull at an auction barn, and the bull killed him. He was teaching school at Madisonville, after getting his degree at Sam. All three of us—Corky, Oscar, and I—had earned degrees at SHSU. When Oscar died, I took all three of our rings, and I gave them to the Alumni Association to put in the ring display. 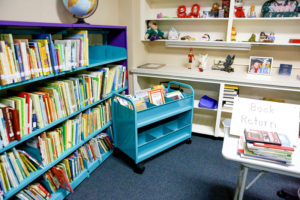 You were still working on your Ph.D. when you lost Corky. You had just begun your teaching career. How did you cope?

I had lots of help. A lot of faculty members helped me, and God gave me the strength. I don’t know; you just do it a day at a time, sometimes an hour at a time. I try to thank God for the time I did have with Corky, and to focus on that. Not everyone had a son. And Corky really was a very special young man. We were so proud of him, and we enjoyed having him in our lives. And I try just to thank God for letting us have that joy in our lives for 25 years, and I will not allow myself to dwell on not having him. That was the way I coped.

When did you get your Ph.D.? 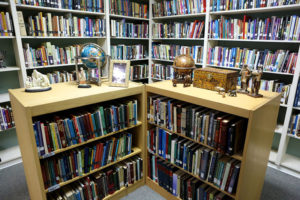 You’ve seen a lot of changes at SHSU and in the community. You were working as a librarian when the library was moved into the Newton-Gresham Building in 1969.

When the new building was approved, we also made the change from the Dewey Decimal system of classification to the Library of Congress. And we did that over a three-year period. When we moved into the new building, all of the materials that were on the open shelves had been classified in the LC system.

You were also involved in the Study Abroad program.

I took students on Study Abroad programs. The first three years, we went to London, and we went in a chartered plane. Sam Houston sponsored it as a university-wide program. After that, we continued it through the Library Science Department. 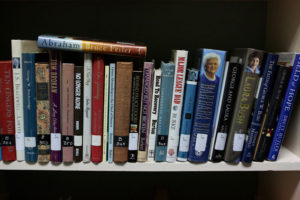 Where else did you go?

We went to Norway, Sweden, Denmark, Italy, Scotland, and Ireland. It was great to spend time with the college students and see the light come on in their eyes. They were thrilled to have these opportunities. Even years later, the people who went on those trips will talk about them with great excitement.

When did you retire?

No, no, no. Oscar died in 1999. We had truly worked as a team. I tried to support him in everything he did, and he certainly supported me. I felt like I was just half there, and I still feel like that, but I also feel like I have two special guardian angels.

You were married for 52 years. When did you get involved in the First Baptist Church in Huntsville? 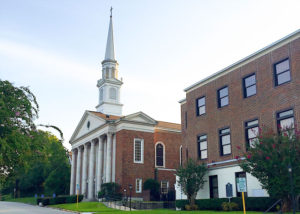 How long were you the Librarian at FBC?

I was named church librarian in 1975 and stayed on until last year, so about 40 years. We have a fine collection of Christian fiction, Bible reference materials, and an excellent children’s library, as well as the archives of First Baptist Church. Most of the materials are now available to the public, and they are accessible through the internet at fbchuntsville.org.

You earned your Ph.D. in your 40s; you did study abroad in your 50s and 60s; you taught until your 70s; and you volunteered at the church until your late 80s. Do you think being a life-long learner has helped you maintain vivacity?

I was saddened to hear that you might be moving to Austin.

My niece Bonnie and her husband live in Austin. They have a large house, and Todd—my niece’s husband—has asked his mother, my brother, and me to come and live with them. I went there last weekend and got my “room assignment” and tried it out. It’s really nice. But my sister is in a nursing home here, and I’m having a hard time thinking about giving up my house. I think I will drive back and forth. Not many people have invitations to live in a place where they can be taken care of by family. And I feel that, at 88 years old, I need to pay attention to the fact that they are asking me to come. I might need someone to take care of me, and I’d like to go there while I can still contribute.

In September 2016, the First Baptist Church hosted an open house to showcase the newest resources in their libraries. In addition, they officially unveiled their newly renamed main library, which is now the “Bonnie Baker Thorne Library.” The library was named in honor of Thorne’s “four decades of volunteerism to the First Baptist Church Library and a lifetime of Christian service.”