Do You Know? David Paitson 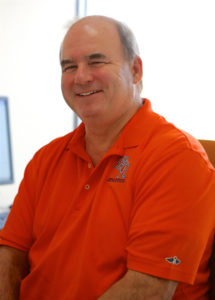 David Paitson is the Associate Athletic Director for External Operations at Sam Houston State University. He previously helped startup the Columbus Chill of the Eastern Coast Hockey League (ECHL) and the Columbus Blue Jackets of the National Hockey League (NHL). He worked for both of those franchises and also for the Indiana Pacers of the National Basketball Association. His book that he wrote with Craig Merz, Chill Factor: How a Minor-League Hockey Team Changed a City Forever, details the start of the Columbus Chill and their impact on the city. It released in 2015 and is taught in ten university sport management programs. It reached #1 on Amazon in two categories, Hockey and Sports Business. 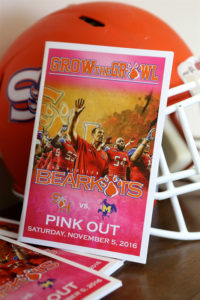 What exactly is your job right now at Sam Houston State University?

There’s two parts to it. First, there’s the specific areas I oversee—corporate partnerships, ticket sales, licensing for the university, our game presentation elements, scripting, things you see for fan entertainment, fan engagement, and marketing. Then there’s fundraising. Most of our fundraising is a cooperative thing between athletics. Those are the details of the job. The objective of the role on a broader scale is to raise the profile of the university through athletics, get people to attend events, and to drive revenues. It is really important that we are connected to the campus, the town, to the alumni, and to everyone that matters. They can help us grow Sam Houston and to help us ‘Grow the Growl.’

Did you know from an early age you wanted to be in sports?

I grew up a sports fan, like many folks do. I became intrigued with the business side pretty early on, because I was a fan of certain sports organizations that were having some business issues. I was not happy that my favorite baseball players were going to the Yankees in free agency, and I wondered why that had to happen. I grew up around the Indiana Pacers in the old American Basketball Association (ABA) back in the 70s, and they had perils with whether the league was going to make it or not. I think those things got me intrigued.

I had a friend of mine in high school who saw all of this happening, my interest and all that, and said, “You need to read this book by Bill Veeck, Veeck as in Wreck.” So I read that, and I really loved the book, and I knew I wanted to try to pursue it [a job in sports business]. I didn’t know until a few years later how to do so or that there were programs in sports management in the country, because there were not that many at the time. That’s what got me on that track.

Once you got into college, what did you do to pursue this passion?

Well, I went my freshman year to my hometown at Indiana State, and then I transferred to Biscayne College in Miami, Florida, because it was one of the handful of sports management programs out there. I went there specifically for that. It was later named St. Thomas University, and I was fortunate enough to have two ex-athletic directors leading the program who were semi-retired. They really taught us how to be pros to the best of their ability, and a little bit about the business and every angle you can think of in that area. They very much insisted you get out and do the practical experience, so we did a lot in school—and he was talking internship from day one. I was fortunate enough to get into a couple of those on a bigger scale, and that led to my opportunity with the [Indiana] Pacers coming out of graduation.

Was it nice working for the team you grew up around?

It was. The franchise was going through its trials and tribulations at the time. It had its rocky road in the NBA for a while, and it was pretty close to going away my first year there. Fortunately, we had some local folks who stepped forward, bought the team, and invested what needed to be invested in the franchise. It had been a phenomenal ABA franchise and had won three championships, but had troubles early on in the NBA. We had people abandoning ship at the time this was going on. The guys that hired me were all gone within 60 days, so I got thrust into a PR role when I was 22. When you think about that, it was pretty crazy. You just step into it, and you start doing things.

From basketball you eventually got to hockey; how did that happen?

One of the folks at the Pacers that I worked with for years (who is one of my mentors) is in the promotional side of things. He had left the Pacers to run the Indianapolis Ice franchise. My first reaction was that I did not think I was going to get involved in hockey. I think I had been to one game before I actually got involved. He convinced me that there would be a lot of latitude and there were some things we could do that were fun, and we would have a chance to really build it [the franchise]. So I did that for about three years; he stuck with it, but then eventually went to the Indianapolis Colts.

An owner had franchising purchased in the East Coast Hockey League, and it was originally destined for Cleveland. There were issues, so he asked for me to find another city. I saw Columbus was a pretty major market, and wondered why there was nothing there. It was facility-related, and a lot of teams had come and gone out of that community. They all got swallowed up by the Ohio State ‘beast.’ So, I had that opportunity, and we worked from a place of fear-failure with the new Columbus Chill and tried some things that were pretty bold to grab attention. We had a pretty aggressive ad campaign that had two layers to it. One was really in your face; part two was built around the stereotypes that people have of hockey. That’s what we went after, and that plays to folks who love hockey. I told our guy who made the headlines, ‘Go ahead and push the envelope,’ which we were already going to do, but this was more. We had to make sure everyone understood that this was tongue and cheek, and that this was a joke. This was how we did it, and it was brilliantly done. 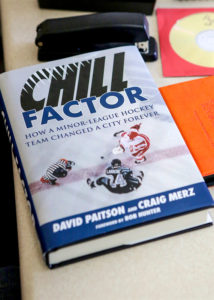 That got us some national attention. Within two months, we had Wall Street Journal, ABC News, and all these sort of things coming out and seeing what the heck is going on, because we were an instant success in terms of following. Not many things had succeeded in Columbus, so everyone else was playing catch-up.

After the Columbus Chill, where did you head?

Columbus was a booming town, but people were all going to Cincinnati or Cleveland for events because of the lack of facilities. The mayor stepped up after some complications with the one event center in town and said that there needs to be something more here. That is what triggered the whole conversation of a downtown arena, and eventually an NHL team. We were a part of that process all the way through. The end result was really remarkable, six years after we announced a Minor League team [the Chill], we’re announcing a National Hockey League expansion franchise, the Columbus Blue Jackets. That is an amazingly fast period of time. The hockey team is the centerpiece of an arena, which was the centerpiece of a completely renovated downtown district. And, we had a hand in there somewhere.

With the Blue Jackets, I was there for ten years. I was the Vice President of Marketing for eight of them. It involved doing things from writing the mission statement to things that I do here at Sam Houston. 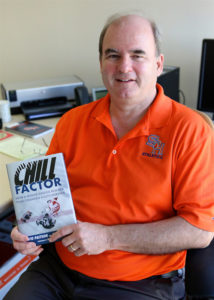 How did you find yourself going from the Columbus Blue Jackets to Sam Houston State in Huntsville, Texas?

I had been involved in hockey a long time, and I had a different ambition. I grew up around Indiana State University sports, and I was fortunate to be there around the time that it was a golden age of sports at the college. I always wanted to go back and contribute in some way and to potentially be an athletic director. That’s why when I was went down the path of college after hockey. Sometimes, when you get the opportunity in life to pursue something, you have to go for it, and that’s my rationale. It was a pretty big change, pro to college, but there are a lot of elements that carry over.

With the book, Chill Factor, how did it come into being?

One of the things I thought about as a kid, before I realized there were sports managing programs, was that I wanted to be a sportswriter. I had a bit of an aptitude for writing. As we came along with the Chill, I actually had our staff fill out a questionnaire about their experiences. I was really sitting with a binder of stories one day, and then the next day I started jotting down a framework. But I can tell you, that’s a really difficult process for someone who does not know what they are doing. That’s why it took Craig [Merz] and I five years. It was a good collaboration, and one of the more unique stories you will find in sports. I wanted to write it in a way that could be read by sports management students as at least one of the audiences and see value in that. We launched it in 2015, around the time of the NHL All-Star Game, and have had about ten sports management programs pick it up and run with it. 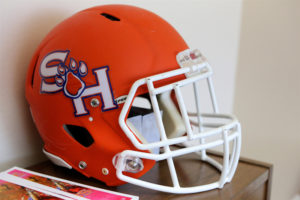 Between the interview and press time, Paitson accepted the Director of Athletics position at Lake Superior State University in Sault Ste. Marie, Michigan. Paitson told Postcards, “This opportunity came up fairly quickly. The time spent with Sam Houston State athletics has been thoroughly rewarding. It is amazing to see how far Bearkat athletics and the university have progressed in the last eight years. I’ve certainly benefited from living through a golden era of SHSU athletics and am in awe of what some of our great coaches have been able to accomplish in tandem with the support of a highly talented and committed administrative team. Lauren and I will now embrace our next opportunity in Michigan, but will always be watching with a great deal of interest all the positive things happening in Huntsville. Thank you all!”

On behalf of Bearkat Nation, thank you David Paitson! We wish you all the best in your new position.