Do You Know? Brian Edwards 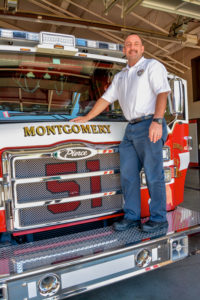 It’s a quiet Monday morning at Fire Station 51 in downtown Montgomery. The fire trucks are polished to a shine, and firefighters are patiently awaiting any emergency that may call them into action. Among them is Fire Chief Brian Edwards, who oversees the 36 full-time and 20 part-time firefighters assigned to Montgomery County Emergency Service District (ESD) #2. He offices at Fire Station 51, because it is the most centrally located of the four fire stations in the 233 square mile district.

Brian began his firefighting training while he was still a student at Conroe High School. He has been a firefighter since he was 19 years old, when he completed firefighting training at Houston Community College and joined the Houston Fire Department. Two years later, in 1992, he joined the Montgomery Fire Department, which was then a volunteer fire department. Today, he divides his time between Houston’s Fire Station 8 near Louisiana Street in downtown Houston (two days a week) and Montgomery (four or five days a week), where he has been fire chief for 20 years. Brian is a busy man, but he graciously welcomes the Postcards team to Fire Station 51.

What made you decide to become a firefighter?

Being in public service is a family tradition. My dad was with the Houston Police Department for about 25 years. Then my stepdad was a Houston fire fighter, and he got into arson investigation. That was originally why I got into the fire department, to become an arson investigator. If you stay in suppression though, the schedules are a lot better, so I stayed on the firefighting side instead of going into arson. 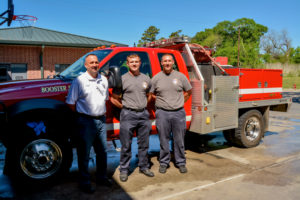 Because you were here when Montgomery had an all-volunteer fire department, can you tell us how being a part of an emergency services district with full-time firefighters helps the community?

In an all-volunteer fire department, if you have no one on duty, a volunteer has to be available and able to drop whatever he is doing to go to the fire station and get the truck. The main difference is that we get money from taxes, so we have quicker response times and better equipment. We have 16 people on duty every day. We still have some volunteers, plus full-time firefighters, and we are supplemented with part-time firefighters.

What geographical area does ESD #2 serve?

Our ESD is 233 square miles, from Richards to F.M. 149, south of Jackson Road. We serve everything west of the lake to Grimes County. We are the second largest ESD in Montgomery County.

In May 2016, voters approved a sales tax increase of 2 cents per dollar in unincorporated areas of the district that will go to the ESD. How will this benefit area residents?

This area was the only area in the county that was not at the 8-1/4 sales tax rate, which really held the ESD back in hiring and providing services. There are quite a few businesses in unincorporated areas that will now be charging 8-1/4 percent sales tax. For some people, it’s going to be a tremendous difference. We are going to be able to add an additional fire station. It will be located on Keenan Cut-off, which will make response time better. People will spend a little more on sales tax, but insurance rates for the residents out on Keenan will drop 40 to 50 percent. We will also be able to increase the manpower at the current stations and upgrade our equipment. We may also be able to offer increased benefits for our firefighters, which is important, because we lose a lot of our firefighters to other fire departments that offer better benefits. 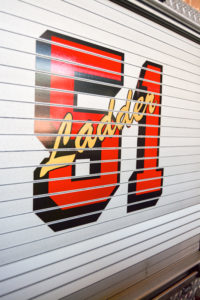 To what types of calls do firefighters in ESD #2 typically respond?

The fire service has changed quite a bit in recent times. House fires are really a small portion of what we do. We respond to any EMS (emergency medical services) call for any reason. We are trained to do basic life support. We have four stations—soon to be five—so we are a lot closer than the one ambulance we have out here. From 65 to 70 percent of our runs are EMS runs. All firefighters are EMT (emergency medical technician) Basics. If anybody has a problem, we will try to resolve it, or we will assist them in finding someone to solve the problem. We are here to help, as long as it doesn’t jeopardize someone else’s service.

We also respond to grass fires, but only about two percent of the calls we respond to are house fires. It’s a national trend that there are fewer fires, but when there are fires, they are worse and more dangerous. Older homes were compartmentalized, so you could shut a door and get out. Homes now have lots of open areas, and new construction materials—like plastics and carbon items—are volatile, so fires burn hotter faster.

What causes most house fires?

Kitchen fires are probably the number one cause of house fires. Lightning is on the list. Also, overloading an electrical outlet can cause a fire. If you have a small, portable heater during the winter, make sure the kids know not to throw anything combustible within three to four feet of the heater. Everybody who has a fire thought they would never have one. Another big issue we see out here is outdoor fire safety. Check the fire marshal’s web site (mctx.org/fire) before you burn anything outdoors. 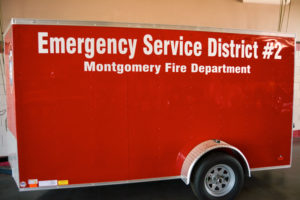 What can citizens do to protect themselves?

You should also have an escape route for everybody, and you need a designated meeting place so that a family member does not re-enter the fire to find someone that is already out. Also, rake the leaves and get small limbs 30 to 40 feet away from your house. There is one big thing homeowners can do to save money on insurance and to save their home if they have a fire—install home sprinklers. They are relatively inexpensive, especially if they’re installed when a house is under construction.

We do a ton of public relations events to help educate people. We go to schools and day care centers, and we do a lot of station tours. We have an inflatable fire safe house, which is a really good learning tool for the kids. They get to crawl around in smoke and climb out through windows. 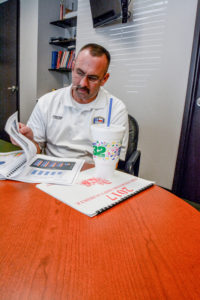 What about other types of emergencies?

We respond to a lot of wrecks, including a lot of motorcycle wrecks. Some of the worst runs we have made have been kids tipping boiling water on themselves. People with small kids need to be aware if they are boiling water or have something hot on the stove, they should keep the kids away from it. Distractions cause a lot of wrecks, whether it’s a child in a car or texting or playing with the radio. A lot of wrecks are caused by drivers being impatient to pull out. Alcohol is also a pretty big issue.

What have been some memorable moments during your career?

I have had so many memorable moments it is hard to pick one. The fire service is like family. You spend a lot of time together and have some rough times and some good times. I have been very fortunate to serve with some of the finest people and firefighters, both in Houston and Montgomery. The people in the Montgomery area are very gracious when we show up, whether it’s a minor emergency or a catastrophic one. There is nothing better than working together to help on someone’s worst day and them saying thank you. 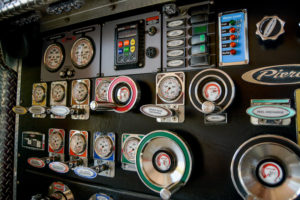 What are some lessons you’ve learned along the way?

I have learned many lessons while being chief. One is that quite a few people are misinformed about a lot of fire department-related issues, but if you can sit them down and explain things, they generally understand.

Tell us about your family.

I’ve been married to April, who graduated from Montgomery High School, for over 20 years. We have two boys, Chase (20) and Dylan (18). Chase plays baseball for UT-Tyler; Dylan plays for Montgomery High School. We follow our sons’ baseball. We also do a lot of outdoor stuff, like hunting and fishing and hanging out with friends. 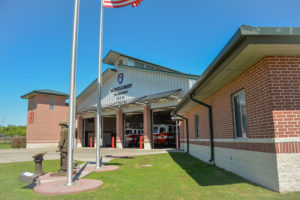 What are your goals and hopes for the future?

My main goal for ESD#2 is to continue to build a fire department that will be financially sound and with qualified personnel to provide a quality service for years to come. One of my goals is to be known as a person who made decisions that were best for everyone—the employees and the citizens we serve—and that I was fair in those decisions. My hope is to leave this place better than when I got here. It was a well-run operation when I got here, but a lot has changed in the 20 years that I have been chief. I am sure it will change drastically over the next 10 to 20 years, and I hope whoever takes over when I leave sees that I left it in good shape with good, hard-working employees. My plan is to retire in five to six years and possibly move to the Hill Country, but that depends on what happens with our kids—of course we do not want to be too far away from them.