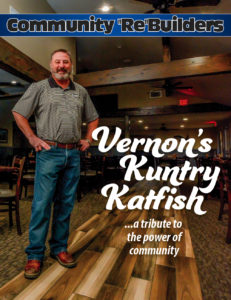 Buster Bowers never imagined that Hurricane Harvey would cause his restaurant to flood. Buster is the son of Vernon and Mary Bowers—owners and founders of Vernon’s Kuntry Katfish—and he remembered the previous 33 years of the restaurant’s existence. Except for three weeks in 1997, when the restaurant closed for extensive remodeling, Vernon’s Kuntry Katfish had never closed its doors. Even during the historic flood of 1994, there was water in the parking lot, but floodwaters never came close to the restaurant.

Vernon’s Kuntry Katfish was open on Friday and Saturday, August 25 and 26, while the hurricane continued to dump unimaginable amounts of rainfall on the area. As the weather deteriorated, however, business was so slow that Buster, now the general manager of the restaurant, made the decision to close on Sunday. He continued to monitor the storm and kept in close touch with a neighboring businessman, who lived on the premises of his business. 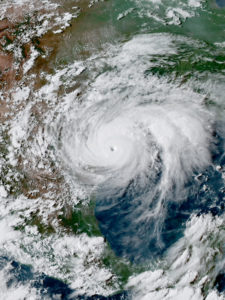 Buster checked with his neighbor several times on Sunday night and early Monday morning. At about 12:30 a.m. Monday, assured that the restaurant was still above water, Buster went to bed; however, when his cell phone displayed his neighbor’s number at about 5:30 on Monday morning, Buster knew it was bad news: “He said, ‘There is two feet of water in your restaurant. If you need to save anything, come real quick.’” Buster fully intended to put on rubber boots and wade through the restaurant, but his sister (and Vernon’s office manager), Debbie Bowers, was staying with their mother nearby. She convinced him that there was no way to get into the restaurant. The water ultimately rose to nearly three feet before it receded.

Speaking from the grave

As a child, Buster bused tables and washed dishes at the family restaurant; he began cooking when he was 16 years old. He worked at other restaurants while attending college, but came back to the family business in 2001 after graduating from Sam Houston State University with a degree in food service management. That same year, Buster’s father Vernon died.

As the floodwaters quickly receded, Buster remembered his father’s advice. “He told me, ‘Son, don’t worry about advertising. Your advertisement is to keep serving people food and to keep cars in the parking lot.’ I don’t remember a lot about all the advice he gave me, but that was something that stuck with me,” Buster says. “When this happened, it was kind of like he was speaking from the grave, so I decided that no matter what, we were going to keep serving people food and keep cars in the parking lot.” 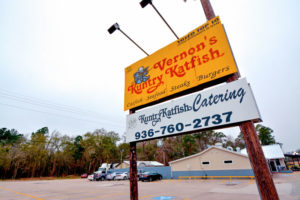 So, on Thursday, August 31—just three days after the restaurant flooded—Buster ordered a truckload of food to be delivered the next day. He also arranged to rent an enormous tent to put in the parking lot. Relying only on social media and word-of-mouth advertising, Buster put a plan into action. On Saturday, September 2, an abbreviated staff began serving a limited menu of fried catfish, french fries, and hush puppies. Payment was by donation only, and Buster hoped to cover costs and to provide some income for the displaced members of the staff.

“On that Saturday, we served more people in a four-hour period than we normally do all day long on Mother’s Day,” Buster says.

“I think we thought it was just a one-day thing,” says Julie Bacon, a member of Vernon’s wait staff. 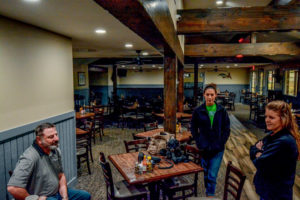 “I figured it would maybe last about two weeks, and after that things would slow down,” Buster says, “but it didn’t. People just kept coming. They would pull in because they saw cars in the parking lot. Even though they were maybe pulling in for a chicken fried steak or whatever, when they realized what we were doing outside, they stayed.”

“It had 600 shares on Facebook and all these likes,” says Niki Gaither, another member of the wait staff. “The line was unbelievable. It was so hot outside, and I saw all these little elderly people lined up to the street and then around the parking lot. It didn’t go fast, because none of us were prepared for what was going to happen. It just exploded. It was definitely something we were thankful to be a part of, but as an employee, I was so thankful I worked for a boss who wasn’t in a feel-sorry-for-me mentality but was in a survival mentality. It was so sad, but at the same time, it was so moving.” 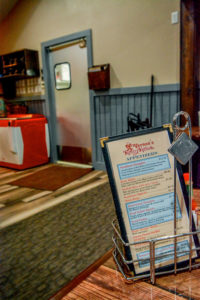 The outdoor kitchen continued to serve food the entire time the restaurant was being restored. Buster, overwhelmed by his customers’ generosity, attributes the phenomenon to “the goodwill of humans.” Besides, people missed the restaurant and its staff. “The people wanted to see their waitresses,” Buster says. “We have people who come in here five times a week. Our staff is like family to them.” In addition to covering the cost of the food, Vernon’s Kuntry Katfish was able to provide its staff with partial paychecks. Buster estimates that 80 to 85 percent of the “front of the house staff” and about 60 percent of the “back of the house staff” did not have to find other jobs during the months that the restaurant was officially closed.

Staggering destruction and a surprising response

“I’d never been in a flooded building,” Julie says. “I didn’t know how much damage it does. It was very overwhelming. Everything was off the shelves. Have you ever seen hush puppies that have been soaked in water?”

It was emotional for the staff to see the devastation because, Niki says, “This is like our second home.” It was particularly sad for them to see 33 years’ worth of waterlogged newspaper articles and family photos. “There were tables lined up together and pictures laying out to dry,” Julie says. “That’s what got me.” 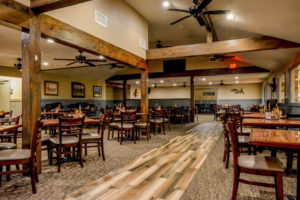 As soon as the floodwater receded, Buster texted about ten good friends and asked for help. The news quickly spread, and soon the army of helpers numbered 40 or more. “We saw workers that we currently work with, people that we worked with in the past that we hadn’t worked with for years, customers, family, friends, extended family—all were here, cleaning it up,” Niki says. “Everybody just showed up.”

“People were driving by and just started helping,” Julie says.

Loyal patrons rolled up their sleeves for dirty work and generously donated in exchange for fried catfish, but they also did more. Knowing that Vernon’s Kuntry Katfish did not carry flood insurance because of the prohibitive cost of premiums, customer Matt Corley started a GoFundMe page to help defray the costs of reconstruction. The page raised about $10,000 in two weeks. Meanwhile, District Attorney Brett Ligon, Darin McKenzie, owner of McKenzie’s Barbeque, and Joe Haliti, owner of Joe’s Italian Restaurant, initiated a fund-raiser that ultimately raised over $100,000.

When Vernon’s Kuntry Katfish first opened in 1984, it had 10 tables with seating for 40; expansions in 1989, 1991 and 2001 ultimately increased the restaurant’s seating capacity to 170. After Hurricane Harvey, Buster worked closely with a friend in the construction business and another in the restoration business, and decided to make some structural and esthetic improvements while staying true to the restaurant’s original country look. Dining areas were streamlined and ceilings were raised, leaving exposed beams. 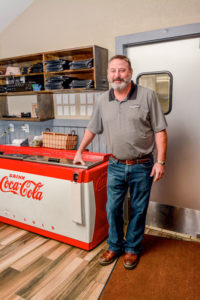 A Coca-Cola ice chest, which has been at the restaurant since it first opened, was in terrible shape after the flood, but Buster had it restored as a tribute to the restaurant’s successful past. It is now in the same spot it has always occupied.

On Sunday, November 19—less than three months after the flood—Vernon’s Kuntry Katfish re-opened. “They really did a nice job fixing it back up,” says Col. Sam Hawes, assistant commandant for recruiting at Texas A&M University. Sam and his wife, Linda, go out of their way to eat at Vernon’s Kuntry Katfish, often making special trips from College Station. “Always love eating there,” he says.

Most of Vernon’s staff who found other jobs have returned. And although it was a tough time, the flooding, cleaning and restoration of Vernon’s Kuntry Katfish remains a tribute to the power of community. “The hard times make you stronger,” Julie says. “There was always a piece of me that said, ‘We will come out better than before.’”