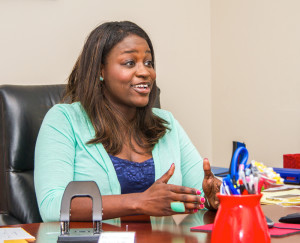 There’s a Chinese Proverb that says, “A child’s life is like a piece of paper on which every person leaves a mark.” Since 2006, CASA for Kids of South Central Texas has been leaving indelible impressions on children from Austin, Colorado, Waller, and Washington counties who might otherwise have fallen through the overburdened legal system’s cracks.

CASA (Court Appointed Special Advocate) acts on behalf of children who have been removed from their homes by CPS (Children’s Protective Services) because of abuse or neglect. Local Program Director Tawanna Mikkola says, “Even though their home may change, or their caseworker may change, the advocate should be that consistent person, developing a relationship with the child. A lot of times, the advocate is giving them something they have never seen before, which is stability.”

In addition to visiting monthly with the appointed child, the advocate works hand-in-hand with caseworkers, judges, teachers, and counselors. It is also his or her job to provide written reports to the court system stating their impressions of which decisions would be in the best interest of the child. Typically, the child/advocate relationship will continue for at least one year, but for some children it may be longer.

Mikkola says, “Some advocates have been with the kiddos for seven years because we just can’t get them adopted and out of the system.”

Last year with 68 volunteers, the local chapter of CASA met the needs of 201 children. Each volunteer advocates for the best interest of at least one child. In some regions of the U.S., many children remain on a waiting list, with no advocate.

According to Mikkola, while most parents are receptive, some are distrustful. “The biggest obstacle we face is helping the parent to understand why we are here, and letting them know that we did not contribute to the removal of their child. We are not an extension of CPS; we are our own entity.

“Once this point is understood, any harshness tends to wear off,” she explains. 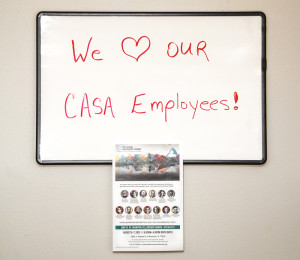 So what type of situation requires a CASA volunteer? The child may be a victim of a parent’s physical or emotion abuse. They may be witnessing parental drug abuse. In certain cases, there may be an inability to care for the child financially. But, at no point is there a message of blame spoken against the parents. CASA is there simply as a liaison between the child, the parents, the caregivers, and the court system.

“Cody” was removed from his home due to his father’s physical abuse towards his mother—a situation that left his mother unable to care for him. After his dad went to prison for drug possession, he was placed with relatives. When that did not work out, he was relinquished to CPS. Cody was then assigned to a CASA volunteer who visited with his foster parents, ensuring that the placement was agreeable. The advocate also visited with his teachers and represented his side of the story in court. She got to know Cody and encouraged his love of music, even to the point of buying him a guitar in support of his passion for music.

Eventually, his mother was released from a mental hospital and attended parenting classes, and Cody began counseling to help him with his struggles. After a year, his advocate considered all angles, and it was determined that Cody could safely return to his mother’s care. The case was dismissed with a happy ending.

Volunteer advocates are “everyday people” who want to make a difference in a child’s life. They receive 30 hours of pre-service training, which Mikkola describes as being comprised of “some classroom-based work and then some fieldwork, and a little bit of homework.”

After training completion, the volunteer is matched with a child. She says one of the most important considerations is what type of child the advocate prefers to work with. “Some will just want babies; some may want a child who is already talking, so they can interact with that child. To some people, location is important. They may not want to drive to Houston. I keep those things in mind.” 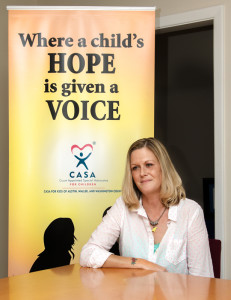 Advocate Jacqui Babb has no preferences. She has been assigned to a case involving three children from one family and says it’s a rewarding experience. Babb spends at least thirty minutes per month with each of the children and brings an occasional gift certificate to the local rink to give them a chance to enjoy their love of skating. It also helps her earn their trust, something she has managed to accomplish with two of the three children.

“It feels good to earn their trust. For a long time, you don’t have that, at least in my particular case,” she says. “It’s a big deal when they finally smile when you show up.”

Babb says her prime objective is to help the child feel safe. She admits to becoming emotionally attached to the children, and there’s a certain sadness involved, with her case now coming to an end. “Brenham is a small town, so I don’t think there’s a way that I won’t ever see them again. Whether or not they run up and talk to me might be something different.”

After a child leaves the program, the relationship may or may not continue, depending on the wishes of the child and consideration of the parent’s willingness to allow the bond to continue.

Occasionally, the child may be placed back in the system if their home life warrants. Mikkola says, “We have had re-removals, of course, over the years, but it’s not a big percentage— maybe five percent. But every parent gets the same advantage as if their case was a first-time removal.” 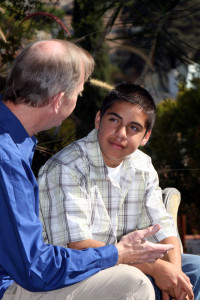 While some children may not find their way as adults, many do.

“Some have taken advantage of the opportunity we provide and are in colleges in Waco, some are in Austin colleges. But then there are others who don’t want CASA or CPS in their business anymore—those kind of fall by the wayside, unfortunately,” Mikkola explains.

CASA is a 501(c)(3) non-profit organization, and much of their funding comes from the kindness of strangers. According to Executive Director Jackie Autman, two annual events bring in most of the direct operating expense revenue—February’s Casino Night and Dinner, and the late summer Wine and Dinner Event.

Each year, more than 700,000 children nationally are placed in foster home care. The local CASA chapter has proudly reached a milestone few chapters ever achieve. Since 2013, they serve 100% of the area children placed in the foster care system. 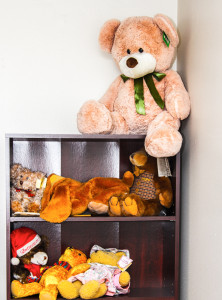 In dealing with the CASA crew, it is obvious their work is more than just a nine-to-five job. They speak of both the children and the parents with a great deal of respect, never passing judgment. It’s an emotional balancing act for the staff.

Mikkola says, “The most rewarding thing is when you first see a child who is suffering tremendously, then you watch that child start to blossom, and you see them ‘come into their own.’”

As for the advocate, Babb agrees it’s extremely worthwhile, and the rewards are far-reaching. In her case, her nine-year-old twins, Hannah and Zayne, have learned from her example and are already counting down the years until they can become advocates. “The required time you actually have to put in to it is nowhere near equal to what the children are getting from it. To me, it’s more than worth it.”

CASA for Kids of South Central Texas is a branch of the national program that began in 1977. Today, there are 955 CASA and guardian ad litem programs in 49 states. Sadly, the number of cases of abused and neglected children has risen to record-breaking levels. The local region, whose main office is located in Brenham, is among those leaving its proverbial positive mark on the lives of the children it touches.