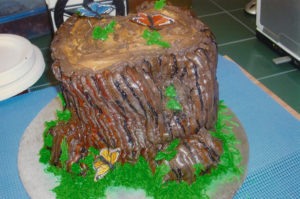 I know of only one person who has proudly celebrated a birthday with a 16-layer cake created to resemble an old, dead tree stump…and that one person is Walter Paschall, owner of Walter’s Stump Grinding. He recently enjoyed that cake baked by his sister, Judy Gentry.

Walter has been in the Huntsville area for the past 11 years, and during that time has built a name for himself here and in the surrounding areas in the stump grinding trade. Prior to that time, he worked for Bryant Bros. Construction in Houston for 20 years as the construction superintendent. Shortly before they closed their business, Walter had purchased a stump grinder in order to do stump grinding on the side. When the business did close, he went into stump grinding full-time, and has done this for the past 14 years. 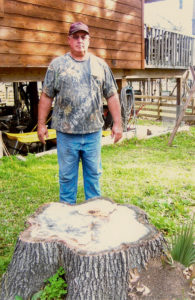 r has built his business upon the principle of “treating people like I want to be treated,” a value that has served him well by bringing repeat business from satisfied customers. His wife Donna attributes the customer loyalty to his quick response, good communication, and prompt service when he is called. As Walter states, “The customer’s time schedule is important, and I like to fit into it whenever possible.” Additionally, as this writer can attest, both Walter and Donna are very friendly and personable people, the kind one enjoys doing business with. 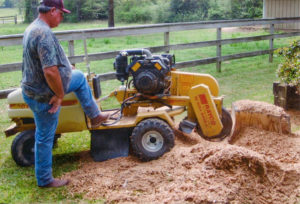 Stump grinding involves the removal of tree stumps of all sizes and ages. Whether the tree has been recently cut down or the stump has been present for years, Walter is able to do a quick removal of it. According to him, the greener the stump, the easier it is to remove. He uses a Rayco Stump Grinder which weighs 1,200 pounds and has an 18-inch cutter wheel. It is 3 feet in width and can easily move through a gate and navigate around landscaping, flower beds, air conditioning units, swimming pools, and other outdoor features. 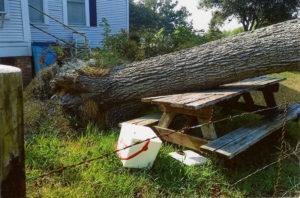 There are several reasons why a stump may need to be taken out. These reasons may include beautification of the property or to prepare the area for construction. Old stumps can also harbor insects and rodents. When removing the object, Walter will continue grinding down to about six inches beneath the surface, and will take out any roots trailing on the surface according to the customer’s wishes. The resulting wood chips can be raked into a pile and left for nine months to create a nice batch of mulch. This will occasionally need to be sprayed to prevent insect infestation. 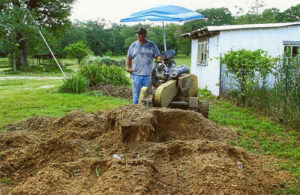 Asked about interesting situations he has had to work in, Walter mentioned a time when he had to do a removal inside a five foot tall lean-to storage shed that someone had built around the stump. Fortunately, his machine is narrow in width and was able to easily access the stump for removal. Another situation involved removing a stump in the middle of a patio. The deck had been built around a tree which had subsequently died. He has also done removals next to swimming pools, and even near an exotic animal enclosure. He had quite the audience that day! 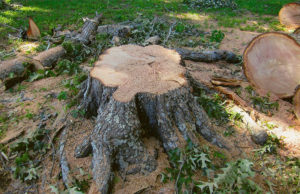 He prefers working on small jobs consisting of one to several trees on a property rather than large-scale removals on several acres, as are common in land development. And, although in the past he has taken down whole trees when needed, he prefers dealing only with stumps. As for pricing, no two jobs are alike. Several factors are involved in a removal. Therefore, Walter will go to the site to make a quote, and if the customer is pleased and the time is right, Walter is usually prepared to take care of the removal at that time. 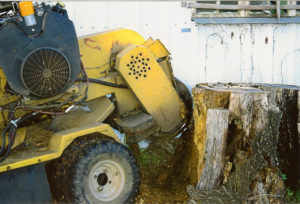 During the aftermath of Hurricane Rita, Walter spent nine months in Orange, Texas removing trees and stumps as a result of the storm. At the time, he owned a second grinder which a friend used in the same area for an entire year following the storm. He prides himself in offering his services for a reasonable fee. He recounted one incident in Orange where he was called to help with a removal. The customer had paid out $900 to a workman prior to the work being done, and the workman never showed up to do the job. He then called Walter, and when quoted the price, was beside himself with relief at the reasonable price. 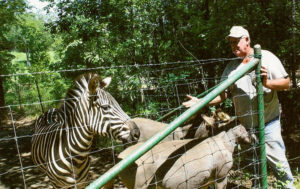 When Walter is not removing a stump from a tree that, as he puts it, “Sam Houston could have slept under,” you can always find him “at work” or volunteering in one of several endeavors. He is a sponsor of the Petting Zoo at the Walker County Fair each year. Additionally, he is a Fourth Degree Knights of Columbus, and is very involved in his work as a member of “All About Referrals,” a networking organization. He and Donna have eight grandchildren and, at the present time, he is building a new home from the ground up! Next on his fix-it list after the house is finished, a 1941 Dodge truck awaiting his skillful touch! He admits that he loves to build things, and it shows. He has built a business from the ground up by providing a quality service, while treating his customers with respect and consideration. Walter can be reached at (281) 380-9258 or (936) 293-6202, or by email at waltcoinc@gmail.com.

Ready to beautify your property or prepare it for your next construction project? Call Walter Paschall of Walter’s Stump Grinding for a free estimate, and quick, personable service at a very reasonable price. Then grab your lawn chair and iced tea. Walter will be there in no time!