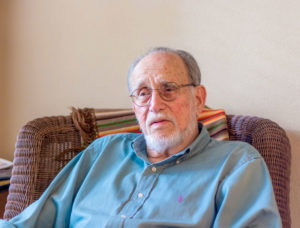 Charles Pebworth has been at it a long time. At 90, he’s still doing art and, although he hasn’t lived in Texas since 2001, his works still dot the region’s landscape (his works can be seen at the entrance of The Woodlands and at Huntsville City Hall, to name just two) and adorn homes, museums, and public buildings in the area—and across the country. These works reflect a passion that has lasted at least seven decades and continues with his ongoing work in watercolor. Speaking of passions, he’s still married to his wife, Nona; these two will celebrate their 65th wedding anniversary in 2018.

You are actually a member of the Choctaw tribe. Tell us about your upbringing.

I was born in Kinta, Oklahoma. As you mention, I was born on a Choctaw Reservation. But I spent most of my time on the Osage Reservation, because my father worked at the Indian Agency there. I feel more attached to the Osage than to the Choctaw. 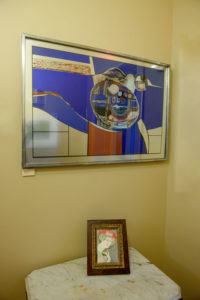 When did you leave?

I left during World War II. I actually dropped out of high school, and I enlisted in the Air Corps. I went into the Army to become a paratrooper, but while I was awaiting deployment in San Francisco, President Truman ordered the atomic bombs dropped, and the war ended. I went back home, but there were no jobs—nothing. I decided to go to college.

You indicated you dropped out of high school. How did you enroll in college?

Back then, in the name of patriotism, they went ahead and let me graduate with my class even though I was in the Army. I got a high school diploma, despite dropping out.

Tell us about college.

I had some false starts in Colorado and Los Angeles. I was originally majoring in forestry. The only class I enjoyed was biology, where I got to draw cells. That’s when I realized I liked art, and I could draw. I wound up at Baylor in the late 1940s as an art major. After two years, my GI Bill had run out, so I signed up for the National Guard, was stationed in Japan, then went to Korea. I got out in 1952. My mother had moved to Norman, home to the University of Oklahoma, and that’s where I went to school. There, I met Nona. We were in the same art class. There were only three people in that class, so the odds were good. 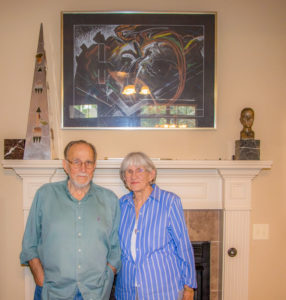 When did you get married?

I ended up moving to Houston, where my brother lived, and Nona soon followed. We were married in 1953. I was working at Foley’s Department Store as a designer in the display department, and I finished my bachelor’s degree at the University of Houston, before moving to Baton Rouge to work on my master’s at LSU. My bachelor’s emphasized drawing, and my master’s emphasized sculpture.

Yes. There were only three faculty in the Art Department at that time, including me. In the next few years, we would hire Stanley Lea, Gene Eastman, and others, and the school began growing. 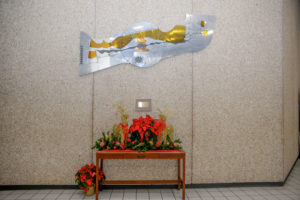 Where did you live in Huntsville?

There was one house for sale when we moved to Huntsville. We couldn’t afford the house, which incidentally was on 11th street, about where the “Boot House” is now. As a starting professor, I was making $4,000 a year, and that made it tough. We looked at an apartment, but that was awful, so we ended up renting at “Country Campus.” The rent was $30 a month, with all bills paid. (“Country Campus” was a former World War II POW camp just outside of Huntsville. Following World War II, it was used as faculty and student housing, but by the 1950s its population was diminishing.) We lived in different locations in Country Campus, including the abandoned hospital. There were 400 rooms there. The operation room, because of its lights, was my studio. Eventually, though, we were able to buy a home on Southwood Drive. 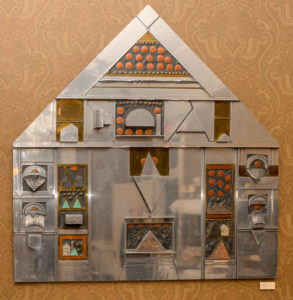 It wasn’t as tumultuous as some of the other universities across the country, but there were some things going on. They fired one professor for his political views, primarily because he was in favor of civil rights. On a more trivial note, I began growing a beard in 1960, and that drew some negative reviews. My dean called me “Billy Goat.” My chair—who had hired me!—stopped talking to me. She actually didn’t speak to me for her last two years as chair of the department. But overall, it was a good place to be. By the 1970s, I was showing in many galleries, and I was getting some attention from several newspapers and magazines.

James Surls told me that a chance meeting with you at SHSU in the 1960s was partially responsible for him being an artist today.

One of the art buildings was just north of Old Main. I was working in the driveway of that building, and I was chopping wood. James walked by, stopped and asked me what I was doing. I told him I was “working on a piece of sculpture,” and that’s how we met.

He told me he didn’t know chopping wood could be art, until you told him that. You mention wood, which you use, but you are probably best known for metal sculptures. How did that start?

A group of professors got together and decided to hold a conference with the idea of learning how to cast metal. So we met in Lawrence, Kansas in 1964, and we learned new things. I went back to Huntsville, bought an old vacuum cleaner, reversed the suction, and hooked it up to an old furnace. And that’s when I began casting aluminum. 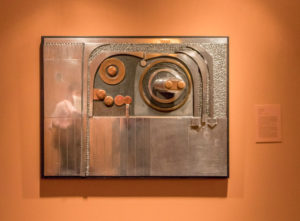 Aluminum is a common feature in your sculptures. Why aluminum?

Because of its weight, and it has a lower melting point. My ceiling was eight feet high, and the flames from the furnace came up pretty high. My solution was to get a sheet of steel and tie it up on the ceiling, so the flames would hit the sheet metal and not burn down the building. Eventually, I built a furnace in the backyard of the building.

So the art department allowed you to do all of this as long as you didn’t burn anything down? 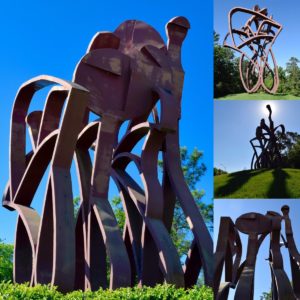 The largest in metal would be “The Family” in The Woodlands. George Mitchell had already bought a couple of my pieces. When he was planning The Woodlands, he came to me and said, “We want you to think about a sculpture for The Woodlands.” We drove on the highway, stopped, got out, crawled through a barbed-wire fence, and he said, “This is going to be the entrance to The Woodlands”!

How much did you make off of that commission?

$60,000. It was a large piece. We made it in four parts in Houston, and they were going to fly the pieces in by helicopter, but they couldn’t get permission to fly it over housing developments, so they ended up bringing it in on trucks.

Well, then they rigged up a crane, and they attached cables and a bathtub to it. I got in the bathtub, they hauled me up, and that’s how I observed and directed the project.

How large is the piece in Houston’s Hyatt Regency?

I think it is 27 feet high and 50 feet wide. This was in the 1970s, and the architects of the hotel chose a group of artists, which included David Adickes and me. They said, “Now, this art needs to last at least seven years.” My piece has lasted almost 50 years, and it is still up. An appraiser called me a couple of years ago, and we discussed the value of the piece, and it’s between $100,000 and $250,000 in today’s market.

In addition to teaching, you were doing numerous commissions.

I was fortunate, because I was active from the 1950s to the 1990s in different galleries in Houston. Often, they would say, “We’d like to commission you, but could you do a sketch?” And I’d say, “No, let me do it, and you decide if you like it or not.” They let me work that way. That’s how I did the Mahogany Wall that’s now in the Newton Gresham Library.

Tell us about that.

It was a corporate commission in Houston. It was commissioned for the 43rd floor of a skyscraper there, and they asked for a sketch. I said, “No, I’ll just do it.” I did, and it was a $40,000 job. It was cut out of two-inch mahogany, twelve feet high, and various widths. Years later, the space was bought by a different company. That company’s vice-president was a graduate of SHSU, and he donated the piece. That’s how it is in the library now. 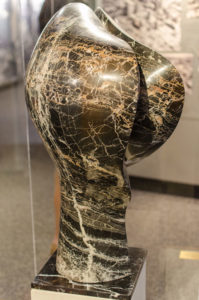 I’ve also seen some pieces of yours that are made from marble.

In the 1970s, I was able to travel to Italy with my family. There, I was able to access Carrara Marble, where they have been quarrying marble for 2,500 years—it’s the same place Michelangelo got his marble—and I ended up doing 40 marble sculptures. I shipped them back to Houston, which was costly. The largest one was 20 tons.

I actually saw one of those at the Oklahoma City Bombing Memorial. It survived the 1995 bombing.

The piece in Oklahoma was on display at the federal building, but before the bombing, it had been selected for an exhibition in Washington, DC. When the exhibition ended, they shipped it back to Oklahoma City, and the marble sculpture was still in a packing crate, so it wasn’t damaged. 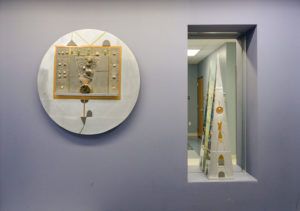 You began at SHSU making $4,000 a year, but three or four decades later, you were doing commissions for tens of thousands of dollars. How did that feel?

It felt good, because I had four kids to raise and send to school! 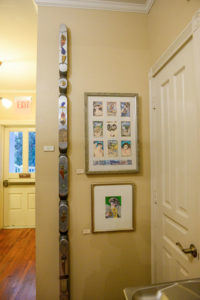 You are 90 now. At what point did you become uncomfortable doing large pieces?

Well, I was still doing fairly large pieces in the 1990s. I did the totem at the Huntsville City Hall in the 1990s.

Are totem structures and your use of turquoise, also a common theme in your work, a direct line back to your Indian ancestry?

I have always collected rocks and things. I love turquoise and lapis; they are my favorite semi-precious stones. I have all the equipment to grind, cut, and polish stones. But the white man is always selling shiny things to Indians. I sell the shiny things back.

Which sculptors most influenced you?

I was influenced by German sculptors, along with Constantin Brancusi and Henry Moore.

How many pieces of art do you think you have done in total?

Before we left Huntsville, we counted around 4,000 pieces that we had sold in different galleries. 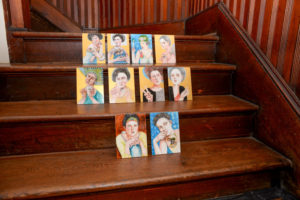 And you are still doing watercolors.

Yes. My watercolor studio is in my home, and I am still creating new works. I just sent 12 to the Wynne Home Arts Center. I’ve always done watercolors. Back at SHSU, we couldn’t do nude paintings because, politically, it wasn’t acceptable. So I did watercolors of semi-nudes, but I put wings on them, and that made them okay.

How long did you work at SHSU?

When you retired, did you think you’d still be a working artist 24 years later?

Not at all. I was in high school when Pearl Harbor was bombed, and people didn’t plan deep into the future then. But I went into the Army, served in World War II and Korea, met Nona, and here we are. 2018 will mark our 65th wedding anniversary.

Not bad for not planning.