When October rolls around each year, there is an excitement in the air. The season of pumpkins, bonfires, and festivals is one to look forward to, as is the cooler weather. But one thing about the month children and thrill-seekers alike look forward to is our spooky holiday…Halloween. Perhaps Halloween is loved because of the fun, creative costumes and the wonderful candy, but some 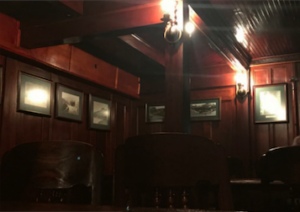 folks enjoy that feeling of being scared. Many people will seek out haunted houses or places that create excitement and suspense that gets your blood pumping. One such place is a historic hotel right here in our great state of Texas.

The Menger Hotel in San Antonio holds the claim as the oldest continuously operating hotel west of the Mississippi. The age of the hotel, as well as the location (adjacent to the Alamo), contribute to it also being considered one of the most haunted hotels in Texas. The Menger first opened its doors on Alamo Square on January 31, 1859, and was owned and operated by William Menger, also the owner of Menger’s brewery, the first brewery in Texas. Menger and his wife realized their drinking guests needed a place to sleep, so they decided to expand a build a boardinghouse. It was not long before the hotel gained a reputation as one of the nest in the West. e Menger was praised for the cuisine offered in the Colonial Dining Room, attracting the famous and infamous as her guests. Notable guests included Sam Houston, Generals Lee and Grant, and Presidents McKinley, Taft, and Eisenhower.

One famous guest known widely here in Texas was Richard King, the founder of the King Ranch. He was so fond of the hotel that the Menger 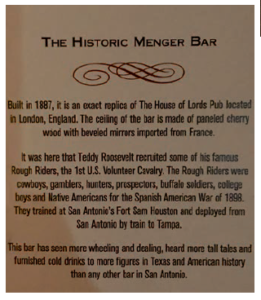 Hotel named one of the rooms the King Suite. at room is where he ended up dying in 1885. His funeral service was held in the hotel’s front parlor, and he has been seen walking the hallways of e Menger since.

Today, the hotel’s structure boasts original wrought-iron balconies and architecture, San Antonio’s largest heated swimming pool, a full-service spa and fitness room, and one of the city’s most respected restaurants.

Today, the hotel’s structure boasts original wrought-iron balconies and architecture, San Antonio’s largest heated swimming pool, a full-service spa and fitness room, and one of the city’s most respected restaurants.

The hotel is also known for over 32 different ghosts or entities that have been sighted roaming through the hotel’s walls, including the ghost of Teddy Roosevelt. Teddy Roosevelt was known to have stayed in the hotel, but he also recruited some of his famous Rough Riders, the 1st U.S. Volunteer Cavalry, out of the Historic Menger Bar. The Rough Riders were cowboys, gamblers, hunters, prospectors, buffalo soldiers, college boys, and Native Americans for the Spanish American War of 1898. The Rough Riders trained at San Antonio’s Fort Sam Houston and deployed from San Antonio by train to Tampa.

Menger guests, as well as employees, have reported many different “sightings,” with some images even being captured on film. The hotel’s paranormal experiences include seeing televisions go off and on, feeling cold spots, seeing images or people appear and disappear, experiencing discomfort or fear for no reason, and hearing a bell at the front desk ringing by itself.

A young chambermaid was shot to death in the hotel by her husband.

The most well-known of the Menger’s ghosts is Sallie White, a young chambermaid who was shot to death in the hotel by her husband on March 28, 1876. the hotel even paid for her con and grave, which may be why her grateful spirit sticks around. People have reported seeing Sallie in the hotel for decades, in her full-length skirt with a bandanna around her head, in rooms or hallways continuing on her work.

Ghosts are not the only famous guests to stay in the Menger; the hotel has a long list of honored guests, including several U.S. Presidents. While many guests come to experience this elegant piece of history, some come for the ice cream. e Menger Hotel is also widely known for its food served from the Colonial Room Restaurant located inside the hotel. When the Menger Hotel 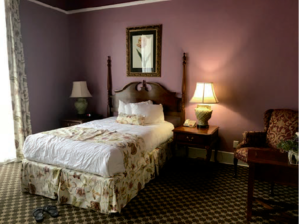 was originally established, William Menger’s wife Mary stepped in as head chef of the hotel and earned a reputation far and wide for her delicious cooking, as she only used the best ingredients. The Menger is famous for their mango ice cream, originally made from fruit culled from mango trees in the courtyard. e ice cream has remained on the menu for over one hundred years and was served at both of President Bill Clinton’s inaugurations, as the hotel shipped over 40 gallons to Washington D.C.

Postcards Staff decided to brave the haunted tales and try out the hotel for ourselves.

Stepping through the doors and into the three-story Victorian-style lobby, you are transported back in time. From the breathtaking architecture to the wood-adorned walls of the Menger Bar to the Spanish courtyard garden, e Menger Hotel assures an extraordinary experience that captures our esteemed history.

The Menger Hotel offers 316 elegant rooms, all decorated and infused with historic charm, but complete with modern amenities (yes, there’s hot water). Many rooms overlook the Alamo, pool, or Alamo Plaza, but all of the rooms retain the furniture, art, and accessories from the hotel’s earlier days, including four-poster beds, velvet-covered Victorian sofas and chairs, marble-topped tables, and period wall coverings. If you are interested in 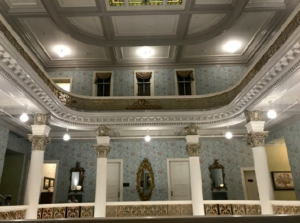 meeting other “spiritual” guests, you may want to request a room in the original part of the hotel (which is where our Postcards sta were placed). I know you are all wondering if I saw any ghosts or had anything weird happen… Did my TV turn off and on weirdly once? Yes. Did I wake up several times in the middle of the night feeling like something was in our room? Yes (no, I did not open my eyes and look). Did I take a picture down our hallway and see weird light on the door that some people would call orbs of spirits? Yes. But I think these were just uke things or my own mind trying to scare itself…at least, that is what I will tell myself–but I will leave it for you to decide.

An elegant place to stay, right in the middle of it all.

Overall, we thoroughly enjoyed our stay. If you are looking for an elegant place to stay right in the middle of it all, we would highly recommend the Menger Hotel. e hotel is only steps from Alamo and the Alamo shopping center with many other bars, restaurants, and entertainment venues. We were able to walk to most places and just enjoy the history and beauty of San Antonio.

Be sure to stop in to enjoy the culinary tradition that Mary Menger established at the Colonial Room Restaurant. Grab some mango ice cream 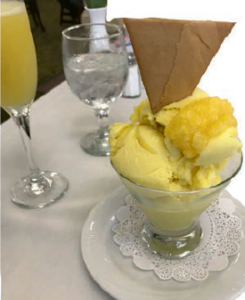 (it is to die for…or, as they say at the Menger, “It makes the dead live again.”), and make plans to attend the popular Sunday brunch buffet (reservations are suggested); it is well worth it!

If you’re planning a trip to San Antonio, looking for a place to relish in our Texas History, or chasing after the paranormal, you may want to take the time to visit or stay in one of our Texas Treasures, the Menger Hotel