Trending
You are at:Home»Features»Do You Know?»Do You Know? Sandra Bosley
By Postcards Magazine on December 1, 2019 Do You Know?

Bosley, who is now 67, was born and raised in Houston, and later moved to Spring. From there, her family looked for a place to set up an RV park and settled near Madisonville in 2000. Her father even lives on the property, which once was a salvage yard.

After spending hours cleaning up the site, Bosley and her husband started the park, which had 10 pads for RVs. They then wanted to get a sign from the state pointing to their campground, but did not at that time qualify — the state requires a minimum of 15 pads and a bathroom. “We put in five two-man tent sites and brought in a port-a-can, and that got us the sign,” she said. Now, the park sports 70 pads, and even has permanent residents. 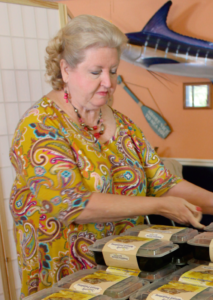 Bosley said as she was pointing to a three-panel window. “Overthere was my master bedroom. I’ve been in accounting all my life, but always enjoyed baking,” she said. “The restaurant was the right place at the right time.”

She first started on her path as a restaurant entrepreneur out of her home, cooking meals with a Fry Daddy, and selling her food take-out. It grew from there. But it wasn’t her first choice for a career. “It wasn’t mine, but it was something my husband Robert wanted to do,” Bosley said. “He loved seafood, and I loved the dessert part, so we decided to try it. We did it as a joint venture, wanting to try it out and see if we were good at it.”

The restaurant is open most days from 11 a.m. to 8 p.m. (11-3on Sundays), and is closed only on major holidays. The fare centers around catfish, shrimp, and oysters, but other types of seafood and other meals are available.

The seafood fare was the perfect fit, as Robert was a seafood fan and always was cooking meals. The bread pudding, however, was all Sandra’s. “When I was a little girl, my parents had taken me to a restaurant in Houston, one that was a buffet style. I was about 10-12 years old,” she said. “They had bread pudding on the buffet. People would come into the front door, go straight to the buffet, get the bread pudding and take it back to their table before they got their first plate of food. I fell in love with that bread pudding.”

However, the restaurant had closed, and Bosley said she spent her whole life trying to find something similar, only to be disappointed — it was either too dry, too messy, no flavor, or too heavy. So, when they were discussing opening the restaurant, she was contemplating the dessert menu and remembered the bread pudding.

“I tried recipes from the internet, but kept getting the same results like those in other restaurants,” she said. “So, I began experimenting, putting pieces of different recipes together, and came up with what I have.”

After the restaurant opened, customers fell in love with the pudding, so much so that a wall sports pictures of happy eaters licking their dessert plates clean.

One day, a manager for the Brookshire Brothers grocery store chain tried the pudding and said it should be marketed in the area stores. Bosley looked into it, which led to a meeting with the corporate deli manager in Lufkin. “She said, “I want to warn you, I don’t like bread pudding,’” Bosley said, so she dared the buyer to heat it up and eat it. She did and then had others try it, and then came back to the table and wrote the numbers 100 and 200. Then she asked how long it would take to get that amount to the stores; Bosley asked for 7-10 days.

“We made a deal to deliver that order to the store in Madisonville; they put it on the freezer truck and took it to Lufkin,” she said. “We shipped it to them, then got a call back that we had misunderstood. We thought they wanted 100 large pans and 200 small containers; the company actually wanted 100 cases of large pans and 200 cases of small.” So, they got back to work, and she now has had her wares distributed through Brookshire Brothers since 2010. The sales of bread pudding increase pretty dramatically during the holidays; Bosley said they sell 6,000-8,000 pounds of bread pudding each week. That consists of 500 pounds of eggs, 800 loaves of bread, 1,200 pounds of sugar, 400 pounds of butter, 192 quarts of cream and a host of other spices and flavoring not meant for publication.

Bosley said she is in negotiations with Costco, has competed in HEB’s Quest for the Texas Best several times, and hopes to grow into another, larger facility. The bread pudding is even in mix form for bakers wanting to experience the cooking process.

Her first slogan, “It’s to Die For,” didn’t make a good impression, so it was changed to “Just Like Grandma’s.”

“I love people’s reaction when they take that first bite of the bread pudding,” she said. It shows as people from all over the country make it a point to get her pudding when they’re in the area. Bosley herself does most of the work, particularly in the restaurant, but also handles the bookwork and back-office items.

Described as outgoing and caring, Bosley said she lives by the credo of treating people like she wants to be treated, which she applies to her businesses as well. She’ll provide donations to her favorite causes, and even helps stranded motorists get to a place for help.

“I constantly remind the waitresses, the workers in the kitchen, to treat people like they themselves want to be treated when they go to a restaurant,” she said. “ I want them to have a good experience when they come here. I want them to feel at home, to come back naturally; I just know what I like and what I expect when I go to a restaurant, and if it’s not that way, I want to know. I ask everyone who goes out the door how everything was; I ask because I want to fix it right now.”

Her hobbies include singing, fishing, genealogy, and doting on her two children and six grandchildren. Most of her heritage is from England, which she dreams of visiting one day. Of her two daughters, one is a chiropractor in Austin, and one works for Crane Worldwide Logistics. And with her grandchildren spread “all over,” she tries to get the family together at least on the holidays every year. Her favorite places in the world are Curaçao, an island in the Lesser Antilles in the Caribbean Ocean; and Ireland, where she spent 15 days hopping from one bed and breakfast to another and falling in love with the country. It’s not all business, as Bosley said she takes time off, even enjoying cruises once or twice a year just to get away, just to “keep her sanity.”