Trending
You are at:Home»Features»Do You Know?»Do You Know? Linda Pease
By Mike Yawn on December 1, 2014 Do You Know?, Web Extra

Linda Pease came to Huntsville in 1972, a move that augured good things for the community. Over four-plus decades in Huntsville, her work has educated two generations of the community’s children, beautified the city, and her collaborative undertakings have helped transform Huntsville into an arts destination, enriching the community and its citizens of all ages.

Tell us about growing up in a small Texas town.

I grew up on a farm in De Leon, Texas, in a tiny house with only three rooms.  At first, we didn’t have running water, bathrooms, or electricity in the house, but shortly after I went to school, we were able to get electricity. My mother was a fabulous cook, and even though we had little space, we had lots of company and guests.  That was a fun part of growing up, because I could bring friends over for dinner all the time.  My father was brilliant with math and puzzles, despite not having finished high school.  He was a farmer—we had cattle and peanuts.  My grandparents lived not too far away. My grandfather drove the “school bus,” which was really just a modified pickup truck.  I remember my father walking me to the bus and lifting me into the back in the morning.  In the afternoon, he would catch me when I would jump from the bed of the truck into his arms.

I was very involved in school activities.  I was active in Future Homemakers of America, played basketball, baseball, and volleyball, and was active in the Spanish Club and cheerleading.  It was a good life growing up.

How did a person from a three-room house end up enrolling at SMU?

I was fortunate to receive scholarships.  I was able to major in English and become certified to teach.

Teaching became an important part of your future, and so did art.  When did you become interested in art?

I’m not entirely sure. Art came along gradually, through school and being exposed to limited but diverse fine arts.  In high school, our school took a field trip to see Pygmalion, and that was an amazing experience.  I chose SMU, in part because I wanted to be able to do things that were available in the city.  I wanted to go to the ballet, and the opera, and the symphony.  But if I go back to my first fine-arts related memory, and a very loose interpretation of fine art, I can remember my first performance when I was six.  The performance was “A Christmas Dream,” and my lines were: “I had a funny dream indeed / I dreamed I was a centipede / For a Christmas Dream, that can’t be beat / because there were socks for all my feet.” (laughs) I guess I can’t be clear about what started my love for arts, but I’ve always loved them at some level.

Speaking of love, tell us about meeting Ralph.

Some friends suggested we meet, and so we all had dinner together. I won’t say it was love at first sight, but I had a sense that this was a very important meeting. After three weeks, he asked me to marry him, and I said yes.  I think that scared him, because the next day we went on a date, and he saw an old, grumpy looking couple.  He said, “Do you think they’re married?”  I said, “Are you regretting asking me to marry you?” I could see he was doubting things, so I told him it was okay, we’d just start over—but the next time he asked, there was no going back!  A few months later he asked again, and we were married shortly thereafter.

After Ralph and Linda married, they started a family, adding two sons, John and Jim.  They taught school, volunteered with Cub Scouts, and Ralph continued his education, which brought him to Texas A&M for his Ph.D. in English. Shortly thereafter, Ralph decided to take a job at SHSU—and the two moved to Huntsville in 1972.

What did you do when you arrived in Huntsville?

Well, in addition to being busy with family things, I volunteered at the COME Center.  I began working for the City of Huntsville in 1975.  I originally worked outreach at the library, taking reading materials and programs to low-income areas. I soon took over the HEAP program, and I worked for Gene Pipes, who was then Director of Recreation.  I began by relying heavily on volunteers, and SHSU’s Criminal Justice department helped considerably; I was able, over time, to hire a part-time worker.

I’ve heard about the amazing growth of the program under your stewardship, from about 200 kids to 1,200 or more after you took over.

Well, the growth was close to that.

After doing HEAP for more than a decade, you transitioned to a greater focus on downtown and art-related projects.  Tell us about that.

Eventually the schools took over HEAP.  The HEAP program offered art classes, and the idea was those programs might be expanded with an arts commission. I called Harley and Marge Rex, and they took me to Austin. We learned how to set up a commission, and our mission was to distribute money to arts-related projects across the community.  Dr. Daryl Patrick, for example, got money to preserve photos of historic Huntsville, and many other good projects were completed.

Not long after, you were able to work on a transformative project involving internationally-renowned artist Richard Haas.

The arts commission got the idea of commissioning a mural, and we had recently seen the trompe l’oeill works he had done in the DFW area, particularly the Chisholm Trail Mural.  We brought him to Huntsville, spent a lot of time working with downtown property and business owners, ensuring that we were preserving the historic nature of the downtown area, and began trying to raise funds.  The Meadows Foundation gave us some much-needed start-up funds, and city council also provided funds, and we were off.

Before that project, what was the state of downtown?

There were 17 vacant shops in the nine-block downtown area.  Haas ended up doing 14 major works in the Huntsville downtown, and his artists did additional work on buildings. Within a few years of the project’s completion, there were only two vacant shops.

Haas’ artwork graces major U.S. and international cities (including Fort Worth, New York City, Chicago, Munich, Boston, St. Louis, Portland, Miami, Pittsburgh, Washington D.C., Phoenix, and Philadelphia), but the largest concentration of his artwork resides in downtown Huntsville, Texas. The work is a product of Haas’ artistry and skill, but also a product of Pease’s perseverance and skill in dealing with people.

The downtown project was a massive undertaking, needing arts commission approval, city council approval, funds from grant-giving foundations, authorization by business and property owners, as well as a busy artist.  Do you think that’s a skill you have, bringing people together for a larger good?

I think art brings people together.  Perhaps there is something deep within my nature that wants that to happen.  I like people, and I want people to come together—perhaps I am drawn to art because of that.  I believe in Christ’s teaching of love and forgiveness, and I try to follow those teachings. I am blessed with energy and enthusiasm, and I don’t know why.  It’s a gift, because I cannot make myself feel that way.

How did the Wynne Home become a city property and the site of your office?

The Wynne family, particularly Samuella Wynne Palmer, showed interest in donating the home to the city for a cultural center. Again, we relied heavily on the Meadows Foundation. They helped us learn from the community, and they helped guide us in how to bring a historic structure into use as a cultural center. The Powell Foundation was the first to provide a grant, and they are a bellwether for giving to the arts in Houston.  Many other grant-giving institutions followed, and the community rallied with funds and sweat-equity as well. It officially opened in 2006.

It’s been open for eight years, how many classes have been offered here?

About 40 classes per year for eight years, so more than 300.

How many pieces of art are currently in the Wynne Home?

Probably around 100 or more, and that includes some internationally renowned artists such as Jesus Moroles, Charles Pebworth, and Stanley Lea, as well as many local artists. It takes a lot of volunteer and community support to make this happen.  I have a part-time staff member (Jessica Rodriguez), we utilize the SHSU Political Science internship program, and we’ve had more than 14,000 volunteer hours donated this year alone.

Earlier you mentioned Christ and bringing people together. The last few years, the Wynne Home has been part of a holiday home tour in Huntsville.  How did that start?

It grew out of the efforts of the Walker County Heritage Foundation, which not only helped restore the Joshua Houston, Jr. home, but also began tours revolving around the theme of “growing up in Huntsville.”  Over time, we began decorating in a holiday theme, and then joined the Gibbs-Powell Home in providing tours at Christmas time, and the number of homes grew from there.

Part of Huntsville was recently designated a “Cultural District,” one of the first districts so designated.  Tell us about that.

The selection occurred in 2009.  It is an 88-block area that incorporates parts of the Eastham-Thomason Park, the Wynne Home, many historic homes in the Avenues, the Sam Houston Memorial Museum, SHSU art galleries, John Smither’s Crazywood Art Gallery, the historic downtown, the Gibbs-Powell Home, the Adickes Foundation, and many of Dan Phillips’ homes.  Huntsville has so many arts and cultural venues, and it’s quite an honor to have the Texas Commission on the Arts recognize the community.

We haven’t spoken much of Ralph, but many people know his work at the University, his love of Shakespeare and film, or his “volunteer work” at the Wynne Home.  What do you think the public doesn’t know about Ralph?

I don’t know if people know he was a Marine.

Do they know he draws a cartoon for you each morning at breakfast?

I bet they don’t!  Tonight, for example, we are taking some friends for dinner, both of whom have worked as pastors.  This morning, Ralph drew me as a somewhat frazzled character, with a thought balloon asking, “Oh, dinner with two preachers.  Which one do we ask to pray over dinner?”  In addition to making me laugh, his cartoons also capture a certain personality about people, and I think he should have an art show featuring these caricatures one day. 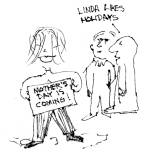 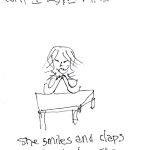 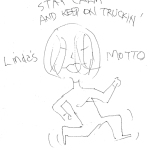 How do you think art can benefit a community?

Ralph Pease is in the middle of his 43rd year as a Professor at SHSU, making him one of the five longest-serving employees with the university.  Linda is in her 40th year with the City of Huntsville, making her the longest-serving employee with the City.  Prior to the 1970s, Huntsville boasted no piece of truly public art.  Since the 1970s, more than two dozen public artworks have been installed, and public spaces or buildings such as The Wynne Home and SHSU have added hundreds of pieces of art for the public to enjoy.

According to Mayor Mac Woodward, “Linda Pease has devoted her career to promoting the youth, arts, and quality of life in Huntsville.  Her efforts have transformed the community, culminating with the vibrant art scene Huntsville boasts today, as well as the city’s recent designation as a Cultural District, one of the first seven districts identified by the Texas Commission on the Arts.”