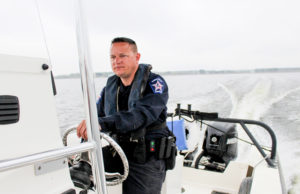 Lieutenant Tim Cade’s cell phone buzzes, and he shifts into high gear. A boat docked on Lake Conroe has escaped its moorings and is drifting—without people on board—on the lake. It’s a common occurrence during the winter, Cade says. Finding the boat’s owner and making sure the boat is properly secured is one of the many duties of members of the Marine Division, Precinct 1 Constable’s Office.

Six highly-trained men—Cade, Sgt. Randy Sanson, and Deputies Tony Guy, Matthew Wiese, Cody Bryant, and James Manning—patrol and respond to emergencies on Lake Conroe 365 days a year. Whether a boater in distress uses a VHF marine radio or simply dials 911 on a cell phone, Cade says, deputies on patrol respond quickly. Even at night, when the lake is nearly deserted, there are deputies on call, and they can usually be at the site of an emergency in about 15 minutes. The Marine Division is attached to Montgomery County Precinct 1 Constable’s Office, but as the law enforcement arm of the San Jacinto River Authority, deputies also patrol the parts of Lake Conroe that are in Walker County. 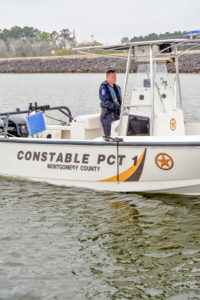 Members of the Marine Division possess a unique set of skills. After graduating from a Texas police academy, they participate in extensive field training, which lasts a minimum of five months. “You don’t just live through it,” Cade says. “You have to pass it.” Deputies must also have advanced diving certifications through the level of rescue and recovery. In addition, they must be certified by Texas Parks and Wildlife as marine safety enforcement officers. Some deputies have also been trained in rescue swimming. It’s not entirely easy for a police officer to conduct a traffic stop on land, Cade says, but for members of the Marine Division, it’s even more difficult—they must be able to pilot one of the division’s five Boston Whalers or Frontier Boats while conducting safety stops.

One of the most dramatic duties of the Marine Division is to respond to boating emergencies, and deputies save many lives each year. “Our deputies don’t get near enough credit for the lives they save in one season,” Cade says. “It happens more often than people know. You could literally make a reality show from what we do here on Lake Conroe.” Daring rescues have occurred during freak storms, after boat collisions, or when boats have taken on water after striking objects under water. Deputies report that boating accidents happen all over the 35-square-mile lake. 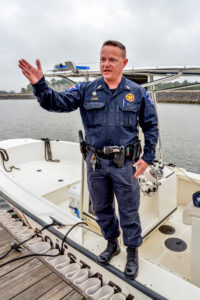 One example of the Marine Division’s heroics occurred when, after responding to a call for assistance, deputies found a capsized boat and a frantic father. He was nearing total exhaustion from his attempts to save his two young children, who were trapped in an air pocket beneath the boat. Not only did deputies save the father from drowning, but they also rescued the children. The grateful father had high praise for Deputy Cody Bryant, the first responder.

“Not only did he operate out of a high level of professionalism, but he also made it very clear by his actions and interaction with me and my family and friends that he truly, personally cared about our well-being,” the father later wrote. “I also want to further say that all the deputies involved were great. They all worked very hard to make sure all were safe.”

Although rescues generate sensational headlines, the deputies who patrol Lake Conroe save perhaps more lives by promoting water safety and by enforcing boating laws. Cade estimates that they spend about 60 percent of their time educating boaters and 40 percent enforcing laws. “Education is key,” he says.

Because of the area’s population growth and its proximity to Houston, Lake Conroe has grown in popularity. Unfortunately, with more boaters on the lake, accidents are more likely to occur. “When you have boating traffic like we have on Lake Conroe, you are going to have boating incidents,” Cade says, noting that there were eight fatalities on Lake Conroe from 2015 through 2016. That’s why he suggests that boaters display courtesy by giving other vessels plenty of room. While a nearby boat might be piloted by a retired navy captain with years of maritime experience, it’s just as likely that it was rented for the day by someone with only minimal training and almost no experience. People born after September 1, 1993 are required to take a boating safety course before operating boats (including jet skis) in Texas, but many people on the lake are older than 23, and are therefore not required to take the safety course. 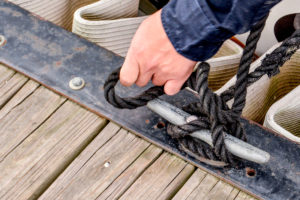 The Marine Division also ensures the safety of Lake Conroe boaters by enforcing the law. “People know when you come to Lake Conroe, if you follow the rules and you boat with a certain set of education, you are going to have a great weekend,” Cade says. “If you don’t follow the rules, there will be consequences.” Common boating infractions on Lake Conroe include violations of the “100 foot rule” (boaters must not create a wake when they are within 100 feet of any man-made objects, such as bridges and other boats, or other people). Just like traffic violations when driving an automobile, boating infractions are class C misdemeanors and are punishable by stiff fines.

Deputy Tony Guy estimates that more than half of boating accidents on Lake Conroe involve the consumption of alcohol. That’s why Cade recommends that every boating party have a “designated captain,” who is responsible not only for piloting the boat, but also for making sure that passengers do not do anything to harm themselves or others. 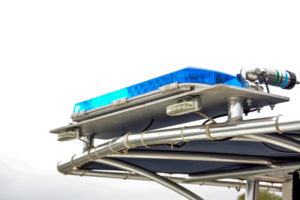 “No refusal” weekends have been highly publicized, but Guy notes that anytime a person is suspected of boating while intoxicated (BWI), deputies will immediately pursue a warrant and will take the suspect to the nearest facility for blood alcohol testing. On “no refusal weekends”—the Fourth of July, Memorial Day, Labor Day and other, randomly-selected weekends—the Marine Division has all necessary personnel on hand, including an assistant district attorney to draft warrants, a phlebotomist to draw blood, a police officer with an Intoxilyzer (often called a breathalyzer), which can accurately measure a boater’s blood alcohol level. The same legal standard—a blood alcohol concentration of 0.08 or greater—applies both to BWI and driving while intoxicated (DWI). Boating while impaired due to drug use, including prescription medication, is also illegal. 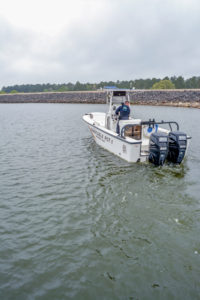 In an effort to make Lake Conroe a safer recreation area, Constable Philip Cash recently implemented a new initiative for boaters. Deputies now conduct pre-launch safety inspections at popular boat launches. If boaters do not have required safety equipment on board, no citations will be issued as long as the boaters obtain the needed items before launching. If safety items are missing during inspections on the water, each missing item can generate a fine of up to $500, and deputies are not required to have probable cause to stop a boater and conduct an inspection.

If boaters pass pre-launch inspections, they are given bright yellow cards to show to deputies that day to exempt them from additional inspections. Required items are: an accessible, size-appropriate personal flotation device for each passenger; a ring buoy or class four throwable; a charged, accessible fire extinguisher; a sound-producing device (such as a whistle or foghorn) for use in emergencies; and the registration card for the vessel. 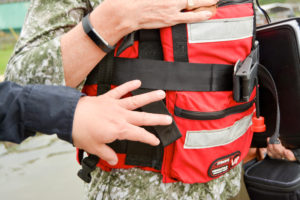 Cade, a nine-year veteran of the Marine Division, often emphasizes the importance of each required safety item. For example, a throwable device, such as a ring buoy, is crucial life-saving equipment. “The best way to save a drowning victim is to give them some means to stay on top of the water without putting yourself in the water,” he says. “If everything else fails, then you go in.” Cade is also passionate about the use of personal flotation devices. At its deepest point, Lake Conroe is about 60 feet deep, and Cade believes boaters should always wear life jackets; however, they are only legally required to have life jackets accessible. If boaters are not wearing life jackets when an emergency occurs, Cade suggests that they immediately put them on before responding to the emergency.

“I have never recovered a deceased individual with a life jacket on,” he says. 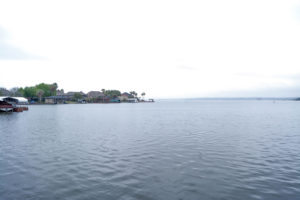 The yellow cards also include the Precinct 1 Constable’s “top ten” boating safety rules. For example, boaters should obey the instructions clearly posted on buoys, which mark areas like restricted zones and no-wake zones. Also, boats should not exceed planing speed 30 minutes after sunset. Planing speed—the speed when a boat rises up and glides on top of the water—varies by such factors as the type of boat and the combined weight of the passengers, Guy says, but is generally about 23 to 28 miles per hour. Cade notes that the information on the yellow cards is available on Texas Parks and Wildlife’s web site (tpwd.texas.gov/fishboat/boat).

“If you operate safely and don’t violate these top 10,” Cade says, “you are more than likely going to have a great day on the lake.”