Sam Houston was the fifth of nine children and the fifth son. His father Samuel Houston had been a major during the American Revolutionary War. When Sam Houston joined the U.S. Army in 1813, his mother Elizabeth Houston understood her son’s decision. She called Sam to her side and handed him a musket saying, “Never disgrace it—for remember, I had rather all my sons should fill one honorable grave, than one of them should turn his back to save his life.” She told him to always remember, “While the door to my cottage is open to brave men, it is eternally shut to cowards.” Elizabeth Houston placed a small gold band on his finger with a one-word inscription—HONOR. This served well the man who would soldier in the War of 1812 and the Texas Revolution, as well as serve as a U.S Representative and Tennessee Governor, President of the Republic of Texas, Texas Representative, U.S Senator, and Texas Governor. 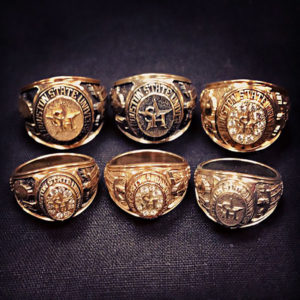 In response to student demands, and in support of then SHSU President Dr. James Gaertner’s goals to revisit old traditions and start new ones, a committee composed of students, alumni, faculty and staff was formed several years ago to create a design for an official Sam Houston State University ring. The committee voted unanimously on a new design which they felt “depicts the character of SHSU.”

Each gold ring symbolically captures the uniqueness of SHSU. The top of the ring features “SH” above a star and surrounded by the words, “Sam Houston State University.” Students may select diamonds to highlight the top of the ring. One side of the ring displays Austin Hall with “SHSU” below, and the other side shows a high-contrast image of the statue of General Sam Houston with the founding year of “1879” below and the class year to the right of Sam Houston. Cast into the inside of the ring, as with Sam Houston’s ring from his mother, is the word “Honor.” 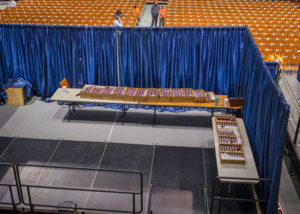 Along with the new ring began a new tradition of an official SHSU ring ceremony. The first annual spring ring ceremony took place on the steps of Austin Hall and the pit of Old Main on April 22, 2004 and was the kickoff for the 125th anniversary celebration of Sam Houston State University. At the first ceremony, 183 students received rings. The tradition took hold and has grown. By Gaertner’s final ring ceremony as university president in 2010, a record 540 SHSU students received their ring at the annual ceremony. In appreciation to Gaertner, an oversized replica of the official Sam Houston State University ring was presented to him during the ceremony. Along with the standard inscription of the word “honor,” an additional inscription read, “For your leadership and guidance in laying the foundation for the Official Ring Program.” 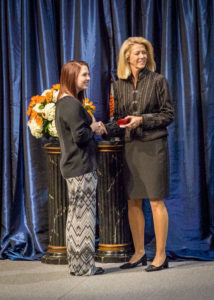 Concerning the ceremony, current SHSU President Dr. Dana Hoyt states, “The first time I attended the ring ceremony was as a Vice President for Finance…I was amazed at how the students really reacted so strongly to the ceremony, and I see that even today as President when you’re watching them out there, and you’re shaking their hands, and how excited they are.”

Since 2014, the ceremony has expanded to include even more special meaning in the conveyance of the rings marking a milestone of achievement toward college graduation. The journey begins the day before the ring presentation. The cases of senior rings are escorted to the Sam Houston home by the SHSU ROTC. The rings are placed in the bedroom of the homestead, where they are guarded throughout the night. The day of the ceremony, the rings are escorted by the ROTC and the SHSU Police Department to the Bernard G. Johnson Coliseum, where they are handed out individually to the recipients by SHSU President Dana Hoyt during the evening ceremony. 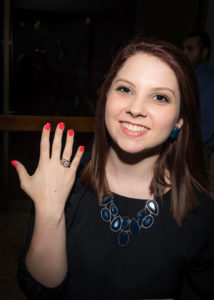 Students continue to embrace and grow this tradition. This year marks the first year Sam Houston has had to split into two ceremonies, one in the fall, and one in the spring, to accommodate the growing number of incoming seniors eager to participate. The fall ceremony was held on November 8, 2017, and the spring ceremony is scheduled for April 3, 2018.

Frank Parker, SHSU Vice President for Student Services says, “I think ‘honor’ is a calling card for all our students. It is something that, when you look inside that ring, it reminds you that you came from a place where history is important, where we have been a part of something in your life, and you must honor that. You have to honor your family, honor your friends, honor your job. Honor is a calling card and something that we all must live by. A person who lives by honor will achieve great things.” 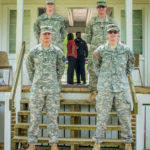 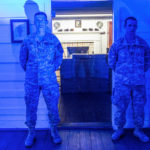 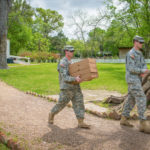