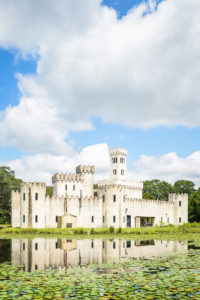 It’s 10:15 a.m. inside of Newman’s Bakery in Bellville, Texas, and employees behind the counter bustle around to serve the line of customers waiting to order. The smell of fresh coffee fills the air, and a variety of powdered, fruity, doughy, crunchy deliciousness waits behind the glass case—everything from cookies to kolaches to sandwiches. How can I pick just one? Almost all of them contain everyone’s favorite ingredient (and arguably very important part of the food pyramid)—sugar. The tables and couches are full of people waiting to board the bus at 10:30 to tour a true Texas treasure. Just a few miles down the road is a castle that sits like a medieval reminder of a foreign time and place. The castle was built by Mike Newman himself, a project he began in 1998. When he saw the need for a bakery in Bellville, he decided to fill it, starting Newman’s Bakery in 1983. He made donuts and coffee the first day the bakery opened, and it has slowly progressed since then to the large variety of baked goods they offer today.

First order of business before the tour—I need a donut ten minutes ago. I get a plain cake donut and a small “Texas cinnamon” coffee, and then it’s time to head over to the castle tour. 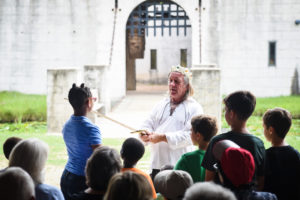 On arriving, we join the crowd gathered at the front, awaiting Mr. Newman’s arrival from inside the castle. His personal home is surrounded by a moat covered in lily pads, with a tall tower at each corner of the castle. He walks out over the drawbridge and introduces himself to the crowd, wearing a crown and wielding a sword. Referring to himself as “Lord of Newman’s Castle,” he starts by giving the crowd some back-story on this ginormous marvel that stands before them, while sneaking a joke in here and there. Wooden swords are available for the kids (and adults), and the children make their way to the front to be knighted by Mr. Newman. He first dubs a little girl Dane Chloe, then Sir James, followed by Sir Aiden and Dane Julia, to name a few. A huge Irish Wolfhound named Avalon lounges lazily behind the crowd where the woods start. The gentle giant is used to the large numbers and unphased by our presence. The kids stand with wooden swords in hand, eager to cross the drawbridge and enter the castle to explore freely. Before we enter, Mr. Newman asks, “Does anybody have any questions?” A female voice asks, “Where’s the bathroom?” He responds, “You can use the moat,” causing the crowd to erupt into laughter. 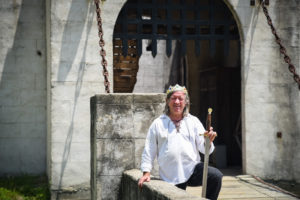 Mike Newman is a Bellville native, born and raised. He has been on a few adventures in his 62 years, traveled to Europe, and has sailed across the Atlantic on a 28 day voyage—but he still wanted to always have a place to come home to in Bellville. While in Europe, he fell in love with the castles he saw there and the romanticism associated with them. In 1998, he decided to pour the foundation and begin a project that would continue for years to come. His original plan entailed building a log cabin in the woods, but his mind changed. The idea to build a castle took over, and with a few helpers and 10 years of work later, Newman moved into the castle in 2006. After a few years of detail work, it was complete with furniture, décor, and the feel of a true home. When designing his home, he found inspiration in castles modeled to have a classic, noble look with narrow windows. The medieval wonder is equipped with a dungeon, chapel, and great hall to host guests. 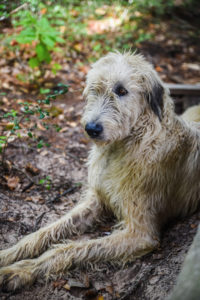 The anticipation subsides as the crowd enters the castle and break off in different directions. Inside, sandwiches, cookies, donuts, and pastries await alongside a long wooden dining table, true to the medieval theme. Kids run from wing to wing, wooden swords in hand, imaginations running wild. I only wish I could have experienced this years ago as a child when the world seemed so much bigger and magical. Nonetheless, I climbed to the top of a tower and rang the 1200-pound bell. Being here is a wonderful distraction from the calamity of real life, which is exactly what Mr. Newman wished to accomplish. “I want people to think anything can happen when they’re here. They can slay a dragon, or be kissed by a princess.”

After a couple of hours of exploring the rooms and towers, the crowd begins to leave slowly, with full bellies and an experience that can’t be found anywhere else in Texas. As the children leave with their parents, Mr. Newman stands at the drawbridge telling them goodbye, a small treasure chest in his hands. 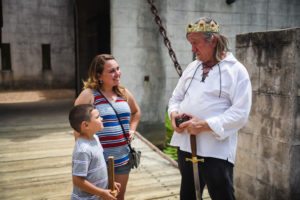 He thanks each of them for bravely guarding the kingdom today, and lets them pick a small gold nugget from the chest. They all leave with smiles and magic running through their veins. The time comes to sit down with Mr. Newman in a round lounging room inside of the front right tower. Mr. Newman sits across from me with his crown atop his graying hair, a warm smile spread across his face, and a glass of iced tea in a fancy glass fit for a king. Now that the grandeur of this is over, its time to get to know the warm, soft-spoken man responsible for creating a legacy that has attracted so many people to Bellville over the years.

How many interviews do you think you’ve done? Ballpark number. 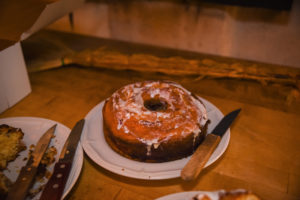 What got you started in the bakery world?

I was married, I was working for other people, and I really wasn’t very happy working for other people. I saw a need for a bakery at the time. I didn’t really know much about it, but I started to figure it out. I found a baker down in Houston who let me work in the shop with him for free. I told him what I wanted to do, I asked a lot of questions. He was extremely encouraging, and I just went from there.

You mentioned you went to Europe when you introduced yourself to everyone. What were you there for?

I was doing some missionary work. 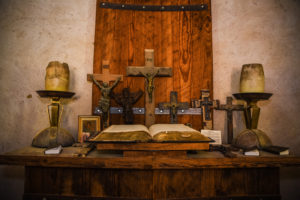 Walking around the castle, you can see a few Bibles and hymnals. How has your spirituality affected your work ethic and what you envisioned doing?

It has definitely guided it. I prayed a lot about this before I started looking into it. My spirituality is very important to me, because I definitely don’t want to do anything that wouldn’t be in good standing with our Heavenly Father. When I started building the castle, the chapel was the first room I finished. 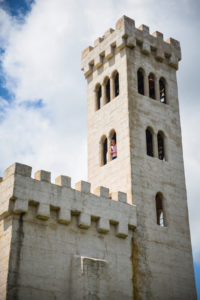 Why did you decide to build a castle?

I bought 20 acres of land to build a home; in case I ever got on a sailboat and sailed around the world, I wanted to have a place in Bellville to come back to. I wanted to build a log cabin and be set. One afternoon, one of my best buddies came out here, and we were walking around and discussing my plans for the log cabin. I wanted to have the logs shipped in and assemble it myself. My buddy said, ‘That’s gonna be an awful lot of work, but when you’re finished with your project, you should be very proud and happy with yourself. After all, a man’s home is his castle.’ Something about that word ‘castle’ started spinning in my brain. After that afternoon, I no longer had the intentions of building a log cabin. I played with the idea for 2-3 years before I started the project. 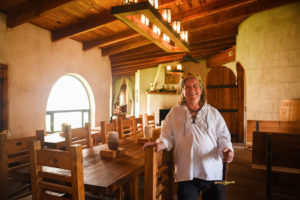 When did you decide to build it?

One afternoon I was out here by myself praying, and a light bulb went off. I remembered a story about a man in Loveland, Ohio, and he actually built a castle by himself over an extended period of time. I thought, ‘If he could do it by himself over a period of time, then why can’t I?’ So that was a great, happy moment. You feel like you’ve been praying about something for a while, and finally its answered. Owning the bakery, I’d wake up very early, go in and make the donuts; as soon as I could finish there, I’d sneak out the back door and come out here with a helper and put in some good 12-16 hour days.

What is your favorite pastry in the bakery?

I still have three glazed donuts and a cup of coffee every morning. 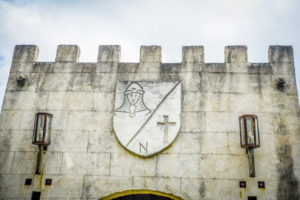 Since you like the romanticism associated with castles, what is your favorite fairytale story?

At any point during starting the bakery or the castle, did you have fear of failure?

I couldn’t afford to fail. I had to succeed, because I had a family to support.

How would you explain your work ethic?

You’ve got to be disciplined and have a vision. You’ve gotta see it ahead of time and prepare. If you want to do something, spend time thinking about it and concentrating on it until you can see it, then make it happen. 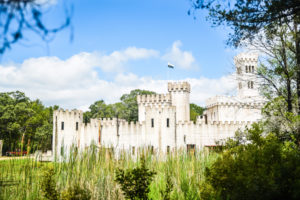 After 34 years in the bakery business, Mr. Newman still enjoys what he does and loves the joy his castle brings to others. In 10-15 years, he can see himself sailing across the world, one of his lifelong dreams. He has a 28-day voyage across the Atlantic under his belt and hopes to sail again one day, although he doesn’t plan on retiring anytime soon. In his free time, Mr. Newman continues to do work with the Gideon ministry and shares his faith weekly with others by ministering at the local county jail. He still enjoys his three donuts and cappuccino at the bakery every morning before giving tours of his castle 6 days a week. Tours begin at the bakery at 10:30 am and everyone in the family is guaranteed to love the castle tour and meeting Mr. Newman, Lord of Newman’s Castle.