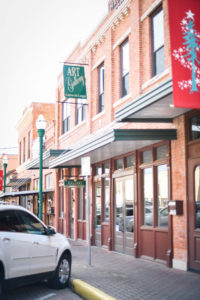 In the early morning hours of February 21, 1911, a fire broke out in a building on Chambers (now Main) Street in downtown Conroe. Aided by a north wind, the fire spread quickly. According to Montgomery County, Texas Historical Timeline, authored by Larry Foerster, a Conroe attorney, the fire destroyed 65 wooden buildings, both businesses and homes. It was the second devastating fire in downtown Conroe in about ten years; two days later, the Conroe City Council passed a fire ordinance that prohibited the construction of combustible buildings in the downtown area.

It wasn’t long before construction began on several masonry buildings. One of those, then known as the Madeley Bros. Building, was owned by the well-known Madelely family. A June 26, 1913 article in the Conroe Courier called members of the family “sturdy citizens” and noted that “Madeley interests in this county include many tracts of fertile land and many thousand head of fine cattle and hogs, besides an immense lot of city property in Conroe.” 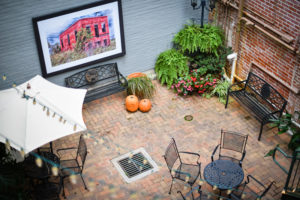 Albert and Daniel Madeley, whose meat market was destroyed in the fire, reopened their business just seven months later. Madeley Meat Market, which sold meat produced from the family’s own livestock, was located on the ground floor of one of three new brick buildings on Simonton Street. Foerster reports that among the noteworthy features of the building was screening, which was installed to keep flies out of the market. A grocery store was located next door.

The second floor of the Madeley Bros. Building has a long history as the headquarters of the local telephone company. Albert and Daniel Madeley’s younger brother, George “Bell” Madeley, manager of the Conroe Communications Company, moved the business to the second floor of the building in 1912. In 1913, the Conroe Courier called it a “splendid telephone system,” noting it maintained many lines from Conroe into outlying farms and residences, and even maintained connections with other telephone companies, allowing local residents to utilize long-distance service. 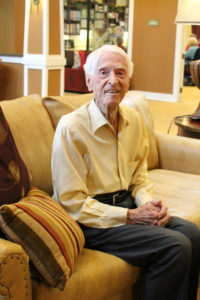 Morris Bateman (pictured above), a U.S. Navy veteran turning 103 on December 12, retired as executive vice president for the Conroe Communications Company in 1985. He remembers working in the Madeley Bros. Building.

The grandiose article further boasted that “Mr. G. B. Madeley is the efficient manager for the company, and the capable and satisfactory service given by it is due to his experienced and intelligent supervision of every detail of its extensive and important activities. This company possesses all the modern facilities and equipment for prompt and efficient service . . . and is an enterprise for which the people of Conroe and Montgomery County are justly proud.” This “modern equipment” included a switchboard that extended across an entire wall of one room on the second floor of the Madeley Bros. Building.

The Lufkin Telephone Exchange purchased the Conroe Communications Company in 1928. In 1948, Morris Bateman, a U.S. Navy veteran working as a telephone wire chief in Lufkin, moved to Conroe to manage the company. (He retired as executive vice president 37 years later.) Bateman, who turns 103 on December 12, says, “They told me, ‘Get yourself to Conroe, and you can be manager.’” When he asked where exactly Conroe was, he was told, “Out in the oilfield.” He recalls that, at that time, there were “600 some-odd phones” in the area, including those that utilized four- and eight-user party lines. “You had to share the telephone,” he says. “That’s all there was to it.” 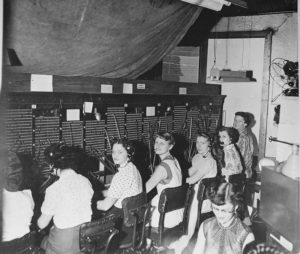 Switchboard operators in the Madeley Bros. Building would say, “Number, please,” and then connect the caller.

At that time, Bateman says, four operators worked upstairs in the Madeley Bros. Building. Three of them connected local calls, while one handled calls to Houston. When a customer originated a call, a light appeared on the switchboard. An operator connected one cord to that outlet and asked, “Number, please,” and then connected another cord to the outlet that corresponded to the number the customer wished to call. Sometimes customers who wanted to place calls to Houston had to wait their turn. Underground cables by the nearby railroad track ran between Houston and Conroe, finally coming through the top of the building to the switchboard, but there were only two lines. “We told them, ‘We don’t have a line available. We will call you when we have a line available,’” he says. After 10 p.m., there was just one operator on duty, and Bateman reports that on at least one occasion, an operator was caught napping on the floor during the quiet overnight hours. 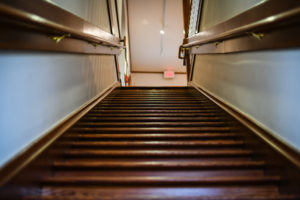 Local artist Jody Hoke was a student at William B. Travis Junior High School during the years the store was in business, and she remembers shopping there with a friend after school. “The Orchid Shoppe, a ladies’ dress shop, was one of our favorites,” she says. “The quality of their merchandise was excellent, and we were always on top of their latest arrivals. The shop was owned by the Bells, a husband and wife and his mother. We often frequented other stores and had a milkshake at one of several drug stores on the square. It was as lovely time and a lovely place to grow up.” 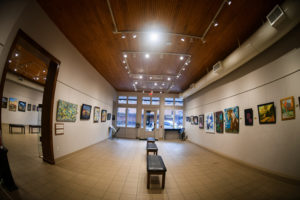 The Conroe Communications Company and its successors occupied the upstairs of the building for 42 years. During that time, larger telephone companies bought up smaller ones, Foerster says, and the name of the company changed accordingly. In 1954, the Conroe Telephone Company, as it was named at the time, moved from the second floor of the Madeley Bros. Building to a new location on Phillips Street. Years later, Bateman’s son, Morris “Butch” Bateman, Jr., was able to visit the empty building. “There were holes in the walls and holes in the ceiling where the cables used to come in,” he says.

The downstairs of the Madeley Bros. Building, which housed a variety of businesses over the years, eventually became vacant, too, and the entire structure fell into disrepair. Pigeons roosted in the alleyway behind the building.

Ultimately, the City of Conroe rescued the building, purchasing it as part of a downtown revitalization effort. The city had a new tenant in mind: the Conroe Art League (CAL), which had been in existence for since 1963 without a permanent home. 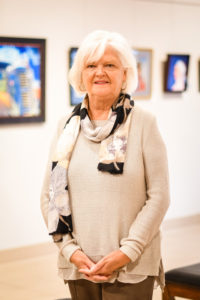 Kerry Conkling of the Conroe Art League (pictured right) gives tours of the historic Madeley Building to people of all ages.

After the completion of extensive renovations, CAL hosted the grand opening of the Gallery at the Madeley Building on November 17, 2011, 100 years after the building was constructed. “They did the most amazing job of cleaning, reconstruction, remodeling and repair,” says Kerry Conkling, who gives group tours of the building to people of all ages, from Cub Scouts to seniors.

On April 26, 2012, Mayor Webb K. Melder and the Conroe City Council proclaimed a centennial celebration of the “beautifully restored building,” noting its rich history and contribution to downtown Conroe. Likewise, the Senate of the State of Texas recognized the building’s “prominent role in the history of downtown Conroe” and issued Senate Proclamation No. 443, extending its “best wishes for a memorable celebration on the 100th anniversary of the Madeley Building.” The Commissioners Court of Montgomery County issued a similar proclamation. All three governing bodies recognized the CAL, which showcases local artists’ work in its Gallery at the Madeley Building.

The CAL’s 300 members are delighted to have a permanent home in the historic building at 127 Simonton Street. “We absolutely love it,” Conkling says. “We are the envy of all art leagues because we have a world-class gallery.” The gallery, located on the ground floor, often hosts visitors from the local area and beyond. It is open Tuesdays through Saturdays from 10:30 a.m. until 5:30 p.m., and also stays open until 8 p.m. on Fridays. 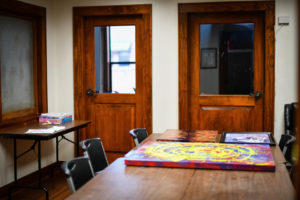 Members and guests often climb the original hardwood stairs to the second floor, where art classes are held. The wood floors and trim around windows on the second floor are also original, Conkling says. A favorite feature of the restored building is the courtyard on its south side. Originally, Conkling says, there was an alley behind the Crighton Theatre, which provided access to the back entrance of the balcony. By walling up the alley and the entrance, a charming courtyard was created. “The courtyard is our hub,” she says. “We have receptions and award ceremonies there. People bring their lunch and sit out there. The painters use it as a nice venue to paint and draw.”

Conkling describes the Madeley Building as a “perfect fit” for CAL and says the league strives to be an excellent tenant. “Artists appreciate the ambience of the building, the fact that it’s 106 years old. It’s inviting and shows off our art beautifully,” she says. “We say, ‘Pinch us; we’re dreaming!’”

Tags:
Previous Article
Just for Fun: Trekking to the Top of Texas
Next Article
Do You Know? Jill Sharp Vaughan