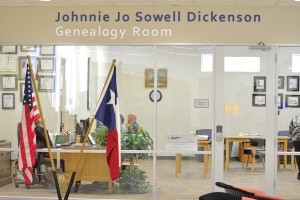 Walking into the Huntsville Public Library, one is instantly hit with a good feeling. The HPL is like most other libraries –but there is something that makes it just a little more special than most rural public libraries – it is not the rooms full of books or even the friendly staff and array of volunteers that makes the HPL unique. There is an aura of tradition and heritage surrounding the inside of the building, and it comes from a well-secured room near the center of the library (which is ironic because of what the room houses). It is the Johnnie Jo Sowell Dickenson Genealogy Room.

Called one of Huntsville’s treasures, the Johnnie Jo Sowell Dickenson Genealogy Room’s story is a gem in its own right. 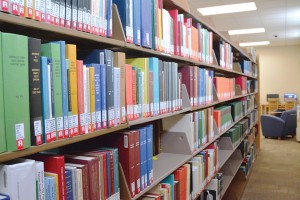 Entering the room isn’t as easy as just walking right in. You have to check-in at the front desk, surrender your driver’s license or identification, and put your belongings in lockers. We were told security is tight because some of the collections are of high value.

In 1965, the Walker County Genealogical Society was organized by 12 women. These ladies shared various book collections with each other – mostly books on local history and families from the area. In 1967, they decided to place the books in the newly opened Huntsville Public Library. 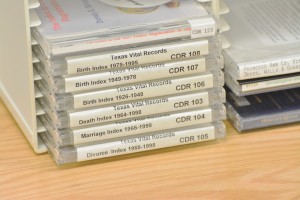 According to Dickenson herself, “They filled three shelves, and then the collection began to grow through donations from the WCGS and people interested in genealogy.” With the increase in the number of books and other items, a need for a larger space emerged. As Dickenson said, “It got a corner slot, and then it grew some more, and it was moved to the meeting room.”

In 2004, the room was named the Johnnie Jo Sowell Dickenson Genealogy Room. Dickenson is a professional genealogist who specializes in court appointments in locating missing heirs in estate cases, serving courts all over the state—and she was, at one time, a president of the WCGS. Dickenson said she was humbled by the honor, and even to this day says there are many more people who deserve credit for their efforts in building the collection, like her fellow volunteers Janet Gardener and Janet Miller. She said, “We are all volunteers…Toni is the only paid staffer.” Toni Herrington is the genealogy librarian in Huntsville, and it is a position she has held, according to Dickenson, for 30 years or more. 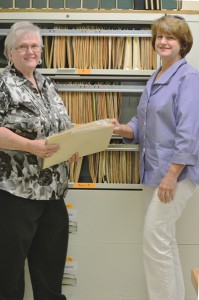 After the library was expanded, the Johnnie Jo Sowell Dickenson Genealogy Room gained an archive, according to Gardener, “for the vertical files and rare books.” The archive, Gardener explained, also houses the special collections section of the library, and most of it is getting digitized…which takes a lot of time.

Gardener reported more than 47,183 images are on file in the digitized section, and most of the images can be viewed from the computers in the genealogy room. Plus, she said, the vertical files at the library contain around 3,500 files. She added, “Patrons need to understand the material in this collection is not just for Walker County people.” Gardener continued, “The material covers other counties of Texas, and many other states, such as Mississippi, Oklahoma, Tennessee, Louisiana, Georgia and Alabama and others.” 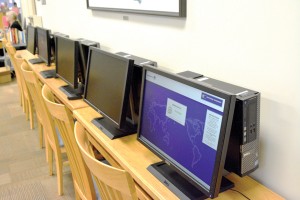 When asked how the room has helped them each in their genealogical studies, the women all paused for a second. Miller said, “I live in Conroe, and I utilize their library, this one, and sometimes a third. I took a Texas history class, and one of the projects assigned to us was about genealogy. I started looking up the history of family, and I got hooked.” Dickenson said, “Madisonville was organizing a DAR group in the 1970s, and one of the women had typed all of my papers, and brought it to me to join. I remember looking at it, and thinking I didn’t know I was related to all these people, but I thought, if Melba (who was the one who brought it to me) could do it, then so could I.” Gardener said, “My grandmother decided she wanted to write her life story, so she asked me to type it. I did, then I thought, ‘why not do my own?’” She continued, “I come from the old-school way of using a library – you know, when not everything was online, and you used microfilm and the catalog. I have discovered that not everything is online, and when you are studying genealogy, you do need to come into the library and actually look at the microfilm or put your hands on a book.” 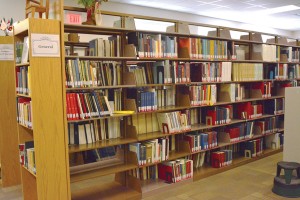 The genealogy collection in the Johnnie Jo Sowell Dickenson Genealogy Room covers a wide historical and geographical area, with an emphasis on Walker County and southern migration. Volunteers from the Walker County Genealogical Society regularly assist patrons with their family history questions in the genealogy room.

Dickenson said, “Every library is unique in its own right. Our library is, too. We are an old county, and we have Texas heroes and famous   Texans– other than Sam Houston – from here. There were Revolutionary War soldiers who called Walker County home. Early citizens brought their culture, their heritage, their traditions, recipes, and so much more when they were here…and a majority of it is recorded here in this room. Browse the stacks…every shelf contains some jewel of a resource that you may have never thought about. The room is growing, and it is dynamic. If you can’t find something, check back later.”

The room has a new microfilm reader, making microfilm research easier. With the new reader, images are downloadable onto the patron’s flash drive. Dickenson continued, “You can tap international resources, like read a book on Irish genealogy, or borrow a microfilm from the world class Latter Day Saints Library in Salt Lake City. The Huntsville Public Library is an affiliate of the LDS Library through the Family Search Affiliate Library Program.” Dickenson also says there is an ongoing effort to acquire materials covering every county in the state of Texas, and every state in the Union. 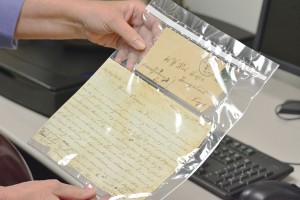 In the special collection, Miller showed a baby book from Lon Steffens, as well as Jefferson County death certificates of African American soldiers from World War I. “The certificates documented the lives of 658 African American soldiers from WWI,” Miller said. There are prison histories, cemetery indexes, locally-written histories, various family collections, and scanned images, including several from Cox Funeral Home Records. Yearbooks from Sam Houston State University, Huntsville High School, and other universities and high schools are available, along with a growing Indian research section. 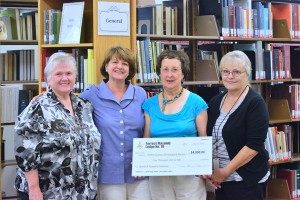 In May of 2014, Dickenson said the Masonic Lodge donated $4,000 for genealogy materials. Dickenson said, “Our goal is to have a book representing every county in Texas and Masonic history of every Lodge in the state.”

Along with the numerous resources available, the library holds various classes and seminars on genealogy and history. August 8-9, the library and the Walker County Genealogical Society will hold its annual genealogy weekend at the library. Called the Francis Sprott Goforth Memorial Genealogy Weekend, the event will include lectures on various history from the area, seminars on how to research and document genealogical studies and what types of resources are available, and a silent book auction. Held at the Huntsville Public Library at 1219 13th St. in Huntsville, the Francis Sprott Goforth Memorial Genealogy Weekend will also have Marian Hunter (an expert FamilySearch.org instructor) and her co-trainer on hand to share their expertise in navigating the multiple layers of the FamilySearch.org website.

For more information about the Johnnie Jo Sowell Dickenson Genealogy Room, call the Huntsville Public Library at (936) 291-5472 or visit the website myhuntsvillelibrary.com.

For the Ultimate Beginners Guide to Genealogy click below: