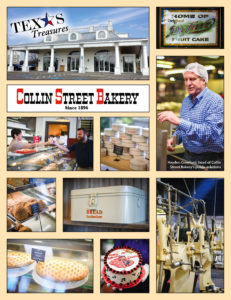 Off 7th Avenue in Corsicana, Texas sits a large two-story brick building, with most of the front large windows stretching from ground to roof. In front of the building is a landscaped area with some benches for sitting and a large white sign near the street. In classic vintage script, it reads “Collin Street Bakery,” and below that “Original DeLuxe Fruitcake.” What started it all for this largely successful bakery business was the epitome of a classic holiday dessert, a treat that you either love or hate…fruitcake. While many of us use the word “fruitcake” to refer to some of our fellow human beings, the real fruitcakes are being made fresh every day in Corsicana at their flagship location bakery and shipped out across the world, along with many other cookies, pastries, and desserts.

Immediately inside the front doors is a staircase leading to the upstairs corporate office. Downstairs, a visitor’s lounge is to the right, decorated with memorabilia from over the years. To the left is the bakery and shop, with shelves of merchandise and fruitcakes. Assorted baked goods sit behind a long stretch of glass, displaying the freshly-baked-that-morning cookies, breads, muffins, scones, and more. A sign to the right of the glass reads, “Welcome. Est 1896. Sandwiches Made Fresh Daily. Coffee, espresso, cookies, cake.” Beneath the sign, a basket with a handwritten memo, “Day old bread ½ price.” A book sits on a counter for customers to flip through, filled with photos of decorated birthday cakes made to order. Old relics and keepsakes decorate the interior of the first floor, and shelves are stocked with cake tins, jars, and cookbooks. 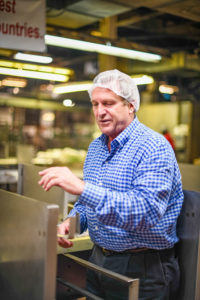 For the most accurate and genuine information on the bakery since they began in 1896, Postcards had the pleasure of speaking with the head of Collin Street Bakery’s public relations, Hayden Crawford.

So this is a huge bakery.

This is a huuuge bakery. We were founded in 1896, and the business at the time was on Collin Street, thus the name. This German baker named August “Gus” Weidman, had migrated from Germany, and he landed somewhere on the coast coming by train. He got off in Corsicana and set up a little shop there, just a little bakery that became so successful that he moved the production into a new, bigger location. Fruitcakes were one of his specialties, but he also made breads and cakes and pies. Gus became partners with Thomas McElwee, a local entrepreneur here in Corsicana. Because the bakery was so successful, they built a hotel on top of the bakery. Thomas McElwee was connected and knew a lot of stars and celebrities around the United States. Corsicana was a big boomtown back then; oil had been discovered, so lots of people were coming in and out of town. These stars would come in and stay at the hotel, and they would give them fruitcakes to take with them. John Ringling came through with his circus, got the cakes, took them back to Europe, and gave them to friends. Those people starting writing us asking how they could get another cake, and that’s kind of how the mailing business began. We recognized we had one and continued to build it. 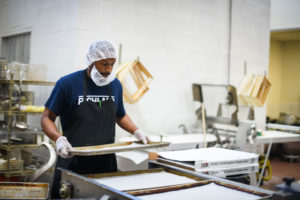 I do eat it once a year. It’s a little too sweet for me, but I eat it around Thanksgiving and Christmas. Pecans are a main ingredient. We have the world’s largest pecan shelling plant right outside of town, so we shell our pecans fresh almost daily. Pineapple is also a major player. We had the world’s largest organic farm in Costa Rica—3,000 acres. Fifty million pineapples were produced annually. We sold the majority of that to Dole, and we now have about 115 acres down there and are continuing to grow pineapple. The fruitcake has cherries and raisins; papaya is also grown at our farm. It’s about 15% batter; and that’s a clover honey batter, and the honey is sourced locally. 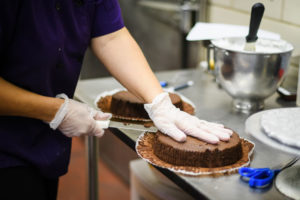 The holiday season is coming up, what does this mean for the bakery?

When we are in full production—October, November, December—our demand can go up to 20,000 pounds of pecans a day. A trailer truckload is 40,000 pounds, so that only lasts us for two days. With our own sheller here locally, we can guarantee quality and quantity.

Are those pecans all just for this location, or is that all of the locations combined? 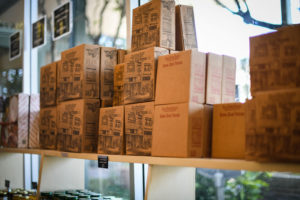 When did the bakery start offering some of the many products other than the fruitcake?

Mail order is where we do a lot of our business; we’re in all 50 states and 196 foreign countries. In the seventies and early eighties, we only sold one product in three sizes, and that was the fruitcake. We began to see a decline in sales, so we started to offer a new item, which we call pecan cakes. We made an apricot pecan cake, apple cinnamon pecan cake, and strawberry pecan cake.

What’s the next move?

This year, we are introducing a caramel and sea salt pecan cake, and a cherry chocolate chip pecan cake, as well as an energy bar. The high calorie count of fruitcakes made the more health conscious start to wonder how many calories were in fruitcake. We have now run into a community of people—athletes, long-distance cyclers—they want calories. They want food dense in calories. They contacted us saying they use our fruitcake as an energy source for their bike races to carb up. Big game hunters started packing for weeks at a time, and they use our fruitcake. There’s a group of spelunkers who go down into Mexico every year and explore this cave, and I’ve been giving them coffee every year. This year, I thought I’d give them fruitcake as well. It turns out all these cavers preferred the fruitcake over their other types of energy bars.

To ensure the quality of the products put out every day, the kitchen will bake the products and bring a tray of samples upstairs to be taste-tested by the office before it goes for sale to customers. The products are checked every day at every location for quality and consistency, a test that they call “Cookie Court.” The bakers will wait for at least three people to taste the products and assign them a grade. If it scores a 90-100, it is put in cases and sold to customers. If it falls short of 90%, that product is pulled and not sold. The quality control manager Skypes each store every morning to visually check the products and make sure every location is selling the same baked goods, all the same top quality.

In the 1940s, Collin Street Bakery was sold by Gus Weidman and Thomas McElwee’s widow to an investment group and has not changed hands since. Lee McNutt passed the presidency of the company to his son, L.W. McNutt. A third generation McNutt continues working for the bakery’s corporate office, as one of the families who have been with the bakery since the beginning.

We embark on our tour, starting in the visitor’s lounge downstairs. A giant cake tin (that was used for a real, 183-pound cake) is mounted to the wall and has been transformed into a working clock. History as dense as their fruitcakes crowds the walls, with thank you notes and recognitions sent in from all over the world. A plaque is framed on the wall from Guiness Book of World Records for “The World’s Largest Fruitcake.”

Finally, it’s time to see the inside of the bakery, the workshop, the art studio—the place where the magic happens. We enter the baking warehouse, and it almost feels and looks like we are walking around Willy Wonka’s chocolate factory, with all the giant equipment and conveyor belts. We see the giant mixers that turn the ingredients, with the dough being mixed in 300-pound bowls. 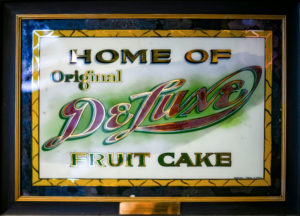 We are shown the assembly lines where the fruitcakes get built and decorated by many individual hands, before they are put onto trays and placed in ginormous ovens that can bake 1,660 cakes in each oven per hour. After baking, the cakes are cooled in a room full of air blasters at 40 degrees F. The cakes are then wrapped in cellophane and sent through an x-ray to check for any possible flaws before being dropped into tins. The bakery has converted old bookbinding machines to wrap boxes snugly around the cake tins. The cakes are placed on a pallet, then sent out for shipping for the world to enjoy.

All HEB stores in Texas will be carrying Collin Street Bakery products this upcoming year, while many locations already sell an assortment of the bakery’s cakes. You can also find their cakes at Brookshire Brothers. The bakery continues to source their pecans from growers in Texas, Georgia, and Louisiana, and they only use native pecans. As opposed to paper shell pecans, natives are grown smaller and more compact, but with more flavor, making them the higher quality nut.

Tags:
Previous Article
A Day in the Life: Animal Shelter
Next Article
Just for Fun: Kayaking Close to Home