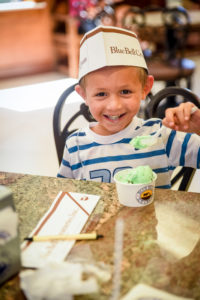 Although still known to many as “The Little Creamery in Brenham,” Blue Bell Ice Cream is anything but little. Blue Bell has expanded out of their Texas roots and taken the ice cream world by storm over the years. What began in 1907 as Brenham Creamery Company, was founded with a mere $2,200. The business that made only 2 gallons a day in a hand-cranked wooden ice cream freezer now sends their products into 19 states, earning the reputation of “the best ice cream in the country.” In 1930, the company was renamed to Blue Bell Creameries Inc., after the Texas wildflower, the bluebell, which blooms during hot months (much like the ice cream business). The company experienced growth over the years, despite many competitors, and reached $1 million in annual sales in 1963. Over the years, Blue Bell has maintained a unique amenity in the food industry that sets them apart and ensures quality service—they always deliver their products personally and directly to the retailer by a driver salesman. The name “The Little Creamery in Brenham” represents the downhome feel, quality, and freshness of Blue Bell products, as well as their ability to maintain personal service despite large growth. 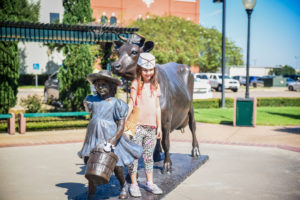 The company now produces a rotating menu of 45 different ice cream flavors, releasing several new flavors each year. In May 2017, Blue Bell added an observation deck, where visitors can now watch the process of how their ice cream is made. This year, 100,000 visitors will make their way to Brenham to experience Blue Bell Creameries, learn about the company history in the visitor’s center, and enjoy $1 scoops of Blue Bell ice cream in the upstairs ice cream parlor. Postcards had the opportunity to tour the Blue Bell facility and go beyond “Employees Only” doors with Joe Robertson, Director of Advertising and Public Relations, and Jenny VanDorf, Manager of Public Relations. 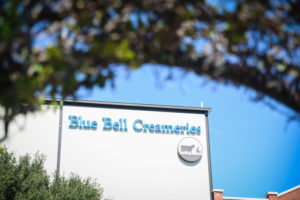 I sit outside of the Blue Bell visitor’s center on a bench, an hour before my scheduled meeting with Joe Robertson, Director of Advertising and Public Relations, to tour of the facility. There are two cups of ice cream next to me on the bench, one mint chocolate chip and one triple chocolate (I like chocolate, okay?).

As I sit and eat my ice cream, a man in dress pants, a button-down shirt, and a tie exits the office buildings and walks along the sidewalk toward the ice cream parlor. He passes me with a friendly smile and says, “It’s a nice day, isn’t it?” “Yes, it is,” I smiled back. “There’s nowhere else I’d rather be than sitting outside eating ice cream!” The gentleman walks inside, and I continue working on my two cups of ice cream, alternating between the two. So how did I end up with two? 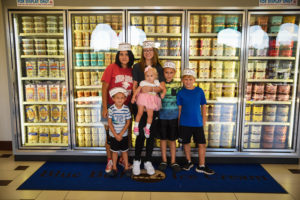 Upon my arrival an hour early, I decide to walk around and explore. I enter the main building and walk upstairs, not expecting what I see next. Hundreds of gallons of Blue Bell ice cream containers are arranged around the room for decoration, tables fill the large room, and small crowds of people are clustered throughout, wearing paper Blue Bell hats and holding cups of ice cream. Approaching the glass behind which many different flavors sit in their 3 gallon tubs, I see a sign that reads “Ice Cream $1 a scoop.” In my mind I am envisioning literal “scoops,” so I decide to get two, expecting to be handed a bowl with two different scoops of ice cream inside of it. Instead, after paying my $2, I am handed two bowls of ice cream, one of each flavor I requested. The woman behind the counter gives me a warm smile and tells me to enjoy. 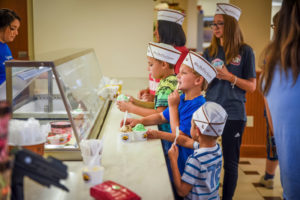 Evidently, they are very generous with the word scoop here. Safe to say you get a lot of bang for your buck! I cross the room of people and make my way outside, hoping it looks as if I’m taking the second ice cream to someone else, while I laugh to myself.

When it comes time for our meeting, we go inside the visitor center and talk with Barbara, an exuberant woman who will have worked for Blue Bell 20 years in March. I tell her we are meeting with Joe, and she calls him on the phone to let him know we’ve arrived. After a couple of minutes, a man walks inside that I recognize. The man who I spoke to earlier outside was Joe Robertson, the person I had been scheduling the tour with weeks prior. Recognition dawns on his face, too. We shake hands and both laugh. Joe pokes fun at me and says laughing, “Well, you’ve already been to the parlor, so we’ll start over here.” 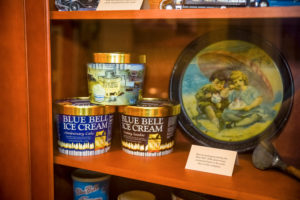 The process of creating new flavors relies heavily on taste panel results and the highly accredited employees of the lab. The test panel is composed of 30 people who meet once a month to taste new recipes and give feedback on flavor ideas (an honor I hope to hold one day). Talk about great responsibility—a task as noble as choosing ice cream for the masses. I ask the team, “What are some of the oddest flavor suggestions you have received?” and their answer didn’t disappoint. People have suggested ice cream flavors such as cactus juice, bacon, and pickle. Cactus juice was actually pretty good, the team says, but it didn’t make the cut. 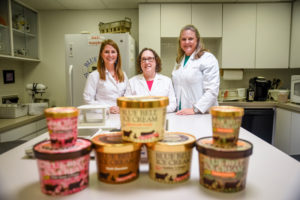 Have you ever wondered who picks new Blue Bell flavors? How the different flavors are created? The lab team behind it is comprised of three women, all nutritional and food science graduates of Texas A&M. These ladies have many responsibilities other than creating new ice cream. In addition to this, they must carefully handle ingredient testing, nutritional labeling, supplier info, consumer information, and other important duties. The team takes about 200 flavor suggestions from the public and narrows them down to the most promising 20-25 flavors. The development team then creates 10-12 samples, which are next evaluated by a test panel. The popular vote makes it, and the most well-liked flavors end up on store shelves. The goal of the research and development team at Blue Bell is to ensure that when you go to the store to buy your favorite Blue Bell ice cream, you also see a new flavor you haven’t tried yet. 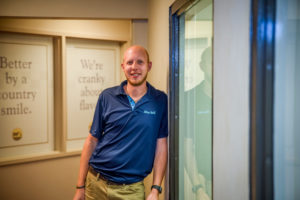 Next, Joe along with Jenny VanDorf, manager of Public Relations, guide us back to the visitor’s center to briefly walk through this large room that holds cases of Blue Bell history, souvenirs, and products over the years. Most of the items on display were donated by ex-employees and customers. The cases and shelves are teeming with Blue Bell history, holding things such as old uniforms and vintage ice cream tubs dating back to the origins of the company. This one room that is now the Visitor’s Center was once the ice cream parlor, theatre, country store, and tour staging center all combined. Blue Bell has greatly expanded since then, hosting many locals who stop in for ice cream after school and providing ice cream to employees in the break rooms. “The saying ‘We Eat All We Can and We Sell the Rest’ really is true,” Joe laughs, and Jenny nods her head in agreement. They both confess to eating ice cream just about every day while at work. Who wouldn’t?! 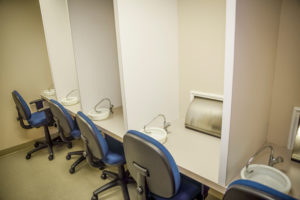 They lead us to the observation deck, the part I’ve been waiting to see—how the ice cream is made. From the observation deck, visitors can peer down through glass walls to the lower floor where machinery, tubes, and employees in white caps fill the square space below. At first glance, it reminded me of Willy Wonka’s Chocolate Factory. Ahhhh—so many delicious ingredients in those silver machines below. In a perfect world, tourists could lie down on the conveyor belt, mouth open, and ride the belt underneath dispensers of toppings like marshmallows and fudge, catching them in their mouth. That’s a world I want to live in. 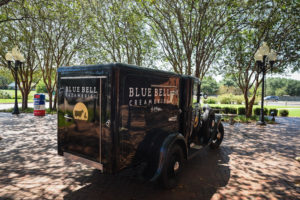 The observation deck, which opened June 12, is designed to be a quick and convenient experience for families driving through Brenham who may not have time for a full-out tour. On average, 4,000 people a week visit the observation deck to watch how the many different flavors are made and sent out to locations all over the country. The floor below contains some interesting pieces of machinery, like the blast freezer, a -40 degree freezer (that feels like -100 degrees)—or my favorite machine that Jenny described, the fruit feeder. This machine feeds yummy toppings like fruit, cookies, or peppermint bark into the ice cream mixture. Once finished, the ice cream cartons are spun quickly and blast frozen upside down, ensuring even distribution of toppings and a tight seal. The cartons also travel upside down in the -18 degree delivery trucks, and do not go right side up until placed on the destination store’s shelf. 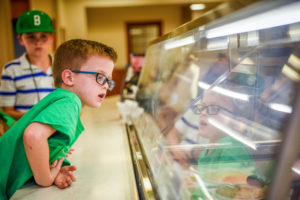 We ended our visit talking over a treat of ice cream in a roped off area of the parlor. There are few things that will make you feel as special as eating ice cream behind a red velvet rope, in an area off-limits to the general public—VIP coming through. It was a sweet end to a sweet day, accompanied by gracious hosts. The four of us discussed current events and Hurricane Harvey, as our visiting Blue Bell was pushed back a week because of the storm. We talked until our ice cream cups were empty and all that was left were little melted pools of pink, green, white, and brown that were made under this very roof. Despite its physical size, Blue Bell Creameries still holds true to the title of “The Little Creamery in Brenham” with their personable, seasoned staff and down-home customer service. Next time you or the family goes through Brenham, make a stop at Blue Bell to watch from the observation deck while enjoying a $1 scoop (bowl) of delicious ice cream.