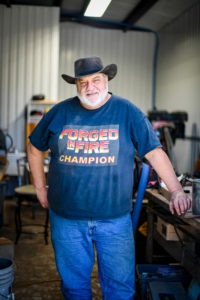 Golden sparks shoot out from the piece of metal in Guy Harris’ hand as he slowly moves it across a spinning grinding wheel in his bladesmithing shop near Magnolia. A robust man with dark hair, a graying beard, and a deep, husky voice, Harris looks more like a biker than a creative type. Yet, he considers himself as much of an artist as a craftsman, and to look at some of his finished pieces – from intricately designed knives to Japanese swords – it is easy to understand why.

Bladesmithing—the art and craft of making knives, swords, daggers, and other blades using a forge, anvil, and hammer—has been around for several thousand years. Despite its historical importance in cultures across the world, however, it was not a widely known or practiced craft in modern times until a few years ago when it took center stage as the focus of a reality TV show and competition on the History Channel, Forged in Fire. 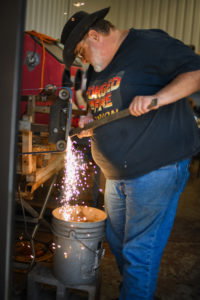 Harris—a former baker turned bladesmith—was featured in the pilot for the show and went on to become the champion of Season 1, Episode 6 in 2015. Since then, the show has exploded in popularity, earning an 8.4 rating by IMDb and growing from an initial eight episodes in Season 1 to a 32-episode Season 5 in 2018. It has taken these artisans out of their home workshops and thrust them—and their craft—into the spotlight.

Since appearing on Forged in Fire, Harris’ business has been booming, and he has been connecting with other bladesmiths from around the country. He moved to The Woodlands from Austin two years ago and ended up connecting with local entrepreneur Michael Thomas, who was intrigued by Harris’ story and caught Harris’ vision for a regional knife show that would bring together elements of the Forged in Fire competition, including the contestants themselves. Together they founded Razor Edge Productions to produce the first annual Texas Custom Knife Show, which was held at the Montgomery County Fairgrounds on November 17. 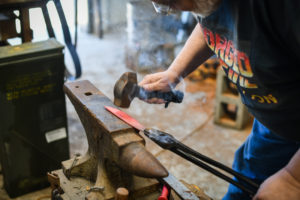 “This event showcased the knife making craft which is as relevant today as it has been throughout history. This skill dates back to the dawn of time and has always been relevant for man’s survival. Whether used as a tool or a weapon, knives are relevant to life, and these (blade)smiths are the best at making terrific blades,” Harris said.

The Texas Custom Knife Show drew crowds of both prospective buyers and people interested in learning about bladesmithing. It included exhibits from upwards of 50 vendors and bladesmiths, including at least half a dozen competitors and winners from Forged in Fire. It featured a two-hour knife building contest like the TV show, as well as workshops on metallurgy and bladesmithing techniques. It even had an exhibition by a mountain man skills group and tomahawk-throwing activities. All of the knives sold at the event were required to be handmade, which the exception of antique blades that are historical pieces. 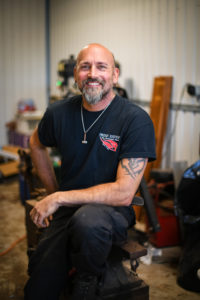 One of the Forged in Fire contestants who exhibited at the Texas Custom Knife Show and taught a class on forging is Peter “Cowboy” Szymanski, owner of Phenix Knives in Bellville. Like Harris, his love of knives and swords preceded his career as a bladesmith.

“I always wanted to get into it. You know, the whole Robin Hood, King Arthur, and Knights of the Roundtable. Knives and swords and armor—I wanted to make it!” Szymanski explained.

Nevertheless, he didn’t think his dream would become a reality and ended up going to school for architecture, then building a career in retail and extreme sports. “I wanted to learn, but back then there was no internet, and blacksmiths were hard to find! Then one day, a guy walked into a bike shop I was managing and told me there was a knife maker just a half a mile down the road. I got on my bike, rode down to his house, and told him I wanted to learn. After finally convincing him I was serious, he agreed to teach me. I rode back to the bike shop, quit my job, and started my classes the next morning.” 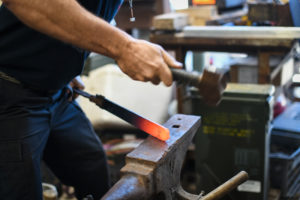 “Twenty-one years later, I’m still doing it, and I love it. It was just a leap of faith…I just knew this was what I was going to do,” Szymanski said.

For both Harris and Szymanski, being on Forged in Fire not only gave them recognition for being the best in the business, it also increased their expertise and helped them hone their craft in new ways.

Szymanski said that, as a result of the knowledge exchange between him and other bladesmiths he met on the show, he has learned as much in the past three years as he did in his previous 18 years of work experience. 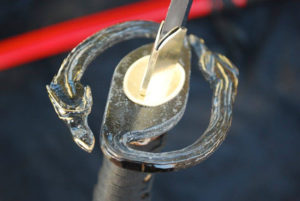 “The thing about Forged in Fire is that it not only enlightened and raised awareness with the public, but it brought a lot of us together. It has formed a brotherhood between us, so now we are constantly calling each other for advice and helping each other out. Now I work with about 30 or 40 guys, whereas before the show, I only knew about three or four other bladesmiths. It really opened up my world,” Szymanski said.

“Everybody comes at it from a different angle, so having other people weigh in on different tips and techniques is really helpful,” echoed Harris. “And unlike in some other industries, we really like each other!” 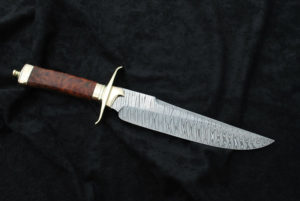 Of course, when the guys talk about the bladesmith “brotherhood,” it is easy to assume all bladesmiths are men, and it’s true the vast majority are. Out of the hundreds of Forged in Fire contestants, there have only been a handful of women participants and only one female champion, Kelly Vermeer-Vella, winner of Season 3, Episode 4. That said, Harris and Szymanski acknowledged the talent that women bring to the craft.

“Women usually make some of the better smiths,” said Szymanski. “Women are more attentive to detail, and they’re patient. Guys have a mindset that, if something goes wrong, they’ll just hit it even harder with a bigger hammer!” 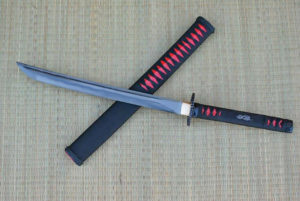 Harris agreed. “I’m not saying who makes the better artisan, but women are almost always the better student. They don’t get as heavy-handed, and women will follow directions. Men will often think they have to insert some element…it’s a dominance thing. They don’t want to be told what to do.”

While the female bladesmiths Harris knows weren’t able to make this year’s Texas Custom Knife Show, he is hoping the women will participate in next year’s event, which he is already in the process of planning. Szymanski, who will produce a bladesmithing show at his historical 1891 blacksmith shop in Bellville next April, says he expects several women to be exhibiting there. 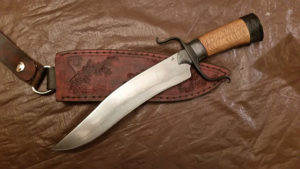 The skill of bladesmithing dates back to the dawn of time and has always been relevant for man’s survival.

Both experienced and aspiring bladesmiths and custom knife aficionados may want to check out texasknifeshow.com to learn more about the Texas Custom Knife Show. Guy Harris can be found as Harris Blades on Facebook and Cowboy Szymanski can be contacted via his website at phenixknives.com.