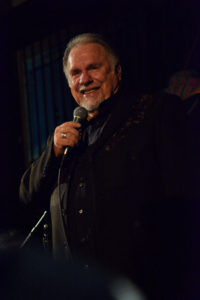 There is a saying within the music industry that defines how well a singer can sing a song: “Once he (or she) sings a song, it’s pretty much been sung.” That sums up how Gene Watson sings a song, because when he sings it—it has been sung. After a career that has spanned some 50 years, from honky tonks to sold out arenas to an open door at the Grand Old Opry, he is still undeniably one of the best pure vocalists in the music business today. You wonder how a man who has literally stepped on thousands of stages can deliver songs night after night with such a perfect blend of clarity and raw emotion. He truly defies physical logic.

Postcards was able to visit with Gene aboard his tour bus before he played recently to a full house of dedicated fans at Dosey Doe in The Woodlands. He was more than happy to share his recipe for longevity of success that takes him out on the road year after year.

What’s your secret, how do you keep your voice so crystal clear and durable through all these years?

The good Lord’s blessed me with my voice, so I take care of myself—I don’t smoke, drink, or do drugs—and I try to get plenty of rest. And now is a good time for us, because this new CD is out, and we’re touring and promoting it.

Are you getting some good feedback?

It’s #1 right now in album sales on Amazon in country music, #57 on Billboard, #7 on the hot disc charts in the UK; so, it’s doing real well.

That’s good news for fans of traditional country music. There’s not a lot of that coming from country radio these days. 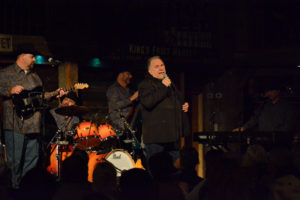 Not the country music we grew up on.

And we’re living proof that there is still a big demand for what we do out there. Everywhere we play, there’s a full house, so that makes us feel good.

I’m sure our readers would like to know more about where your roots in country music began.

I’m from Paris, Texas which I call my hometown. That’s where I got inclined to do country music. At that time, it was country and rhythm & blues—sort of a mixture of music back then. My younger brother and I used to play local functions. As time rolled by, I moved to Houston and was working on cars, doing paint and body work, yet playing in the clubs at night and on the weekends. I had a great band at the time and developed a great following. Then, RM Stone, who owned R&M Record shops, and Russ Reeder, who owned Record Service Company, a one-stop distributor for all the jukeboxes around Harris County, gave me a call. They’d heard of me as word was getting around, and they asked me if I’d like to make some records. I said I’d love to go to Nashville, so they agreed and took me to Nashville. That’s where it all started.

And that’s where you cut your first hit Love in the Hot Afternoon? (reached #4 in Billboard country singles in 1975) 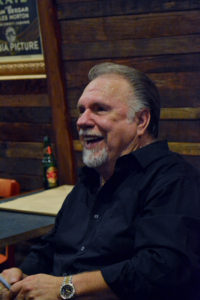 Yeah, but the first song I ever had top 100 in the national charts came out on an independent label and was called Bad Water. That got Capitol Records attention. We went ahead and released Love in the Hot Afternoon independently, and it shot up the charts regionally here (Houston). Then Capitol, even though we’d released it independently, signed me to a long-term recording contract. After that, Russ released it on Capitol, and we’ve been rolling ever since.

It’s amazing how one song can get it all rolling, but you’ve been able to back it up with a string of hits through the years. That’s a talent in itself to pick the right song. What do you look for in a song when you want to record a new CD?

One thing I always retained, no matter who I was recording for, was I had control and input of all the songs that I record. And my back was against the wall a lot of times, because I picked my own material. I tried to be realistic about it; I tried to find songs that were true to the day—something that might have happened to somebody, something that people could relate to and identify with. And that’s what I’ve always kept in mind. No matter how much I like it—how will they like it? Can I reach in there and pull their heart out? Can I make them laugh? I’m a song person; I never get rid of a good song I really like, and a good song can come from anywhere. I spend a lot of time trying to find material for a CD.

And you can hear that in your voice; you sing a song like you wrote it. 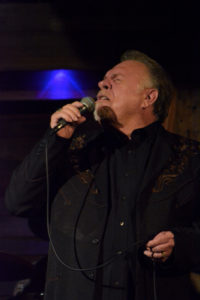 I treat a song like an actor would a role. I have to be able to step in that writer’s shoes and live that part. I have to before it becomes my song.

Your fan base continues to grow through the years. That has to be a testament to not only your song selection, but the way you perform them on stage.

We’ve got our loyal fans that started with me from the beginning. They’ve stuck with me through thick and thin and will travel miles and miles to the shows, and they’re great—that’s what keeps you going. But, I’ve noticed with this new CD that we’re pulling in a lot of the younger age group—new faces in the crowd. And, since we’re number one in CD sales on Amazon, that tells me that we’re touching an audience of younger people who download songs— and believe me, we’re thankful to be part of that new social media like Facebook, Amazon, and iTunes. But, we still sell a lot of CD’s at the shows, and I still sign autographs, shake hands, talk to people—so it’s all working together.

On your CD, the studio musicians are all seasoned players and handpicked. So you know what kind of sound you want before you ever get the tape rolling?

I’m old school, and they tell me I’m old school when I record, but I want all those seasoned musicians in there because I’m inspired by what they play, and what I sing seems to inspire them. It’s a combination that has always worked for me. But, this is the day and time of new electronics, and sometimes the new producers will go across town to get an acoustic track, or go to Dallas to get an electric guitar laid down… You can get things too perfect and too sterile—listen, digital is great—but you can tear up a good song being so metallic. You can lose the feeling. That’s what I looked for on this new CD, though. I used 21st Century technology, but went back for that 1970-80s sound when we recorded analog and cut to vinyl. The warmth and feel you had back then, that’s what I was going for.

I know there are plenty of ups and downs in music, but you’ve been a mainstay despite it all. This new CD seems to be gaining even more ground in that direction. 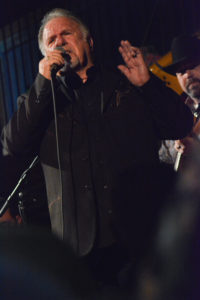 I still love what I’m doing, and as long as my fans are coming to my shows—I ain’t going home till they tell me to.

Before leaving, Gene and his cousin Donnie “Drop” Watson showed us a new line of electric guitars called “GW” Gene is endorsing. Also in the works is a new TV show with Gene and Moe Bandy called The Gene and Mo Show, which will be aired on RFD TV.

A few hours later, Gene Watson and his Farewell Party Band took the stage at Dosey Doe and gave the audience what they came for. Flawless in his stage performance, Gene was complemented by a band of seasoned musicians who all interacted with the audience by adding a sprinkle of humor here and there—it was easy to see why his dedicated fans keep coming back. I gave an honest listen to the new CD Real.Country.Music. There are 13 songs that show exactly why Gene Watson is still one of the most respected singers in country music. They are all exceptional. My personal favorites: Enough for You, the gospel song Help Me, and Couldn’t Love Have Picked a Better Place to Die are delivered by a master vocalist to songs written by songwriter greats Kris Kristofferson, Larry Gatlin, Bill Jones, and Bucky Jones & Curly Putnam, to name a few. To order his new CD, merchandise, or for show info go to: GeneWatsonMusic.com.

Tags:
Previous Article
Do You Know? Judy Hirshey
Next Article
May 2016 LC