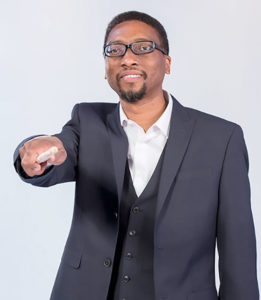 Every few years, my husband knocks a home run with gift-giving. This past Christmas was one of those times. He took me to see Harry Connick, Jr. perform live in Las Vegas. Connick is one of my favorite performers and, because of his TV show and other involvements, he doesn’t tour like he once did. As the show began, I leaned over to my sister-in-law and said, “You can tell from the smile on that drummer that he sure does enjoy his job!” Later, when Connick introduced his Big Band, we found out that drummer Arthur Latin, is a Texan from Nacogdoches! I decided right then that we needed to have a visit. A couple of months later, we did just that. Following a taping of the Harry TV talk show in New York City, we sat down with Arthur Latin to find out more about his life’s journey.

Well, let’s start with the most obvious question. How did a boy from Nacogdoches, Texas end up being the drummer for Harry Connick Jr.’s Big Band playing on television in New York City?

It was really because of Southwest Texas State (now Texas State University). I started off at Stephen F. Austin and then transferred because I really fell in love with recording. I put out an album and fell in love with making records. Willie Nelson’s engineer was teaching there at the time, and I read about it and decided to apply. That put me in a position to be in that area playing in a club in Austin with some musicians from Southwest Texas. Basically, I met Harry through them playing on a Monday night at a jam session. A friend found out I had played with him, and she made me promise to go back with her the next Monday night, and I saw Harry again. 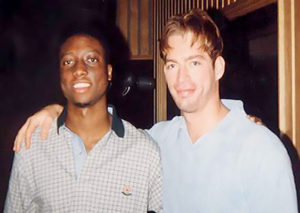 So, right place at the right time?

Yes. I would have never seen him again, even though we had played together. But he remembered me, and we talked. Then we exchanged numbers. He ended up asking me to do a record which was recorded in California at Capitol Records Studio. I couldn’t believe it. So, I did the record, and from there on, he just kept calling me! He called for me to do the promotional tour, then it was another record and so on. We’ve been together ever since, and that was 1997. 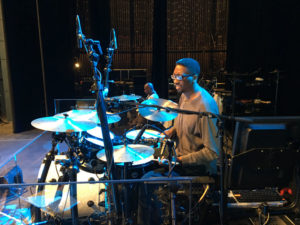 When did you discover your love of music?

Oh, wow. I’m going to have to say from birth. My father was a preacher, and both of my parents were born again before I came into this world. My father was a young evangelist minister, and they took me around with them to churches. As a child, the one thing I remember seeing in all these churches were the sticks and the power and the rhythm of the gospel music. The stomping and clapping and the power of rhythm in general attracted me, but the drums… when the drums were playing, I could see the sticks and the cymbals flying, and I just fell in love. I loved singing and music, but I had tunnel vision to drums. Basically from the age of 3, I started playing. I had a snare drum and a box. I beat on everything! 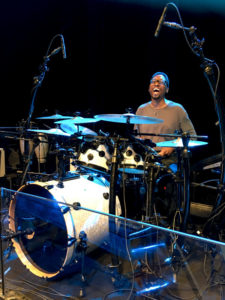 When did you get a drum set?

I got one at the age of 12. When I was around 11 in school, they started teaching us to read music. I was in 6th grade and was so excited! I wanted to learn about everything in percussion. It was a beautiful experience with my teachers. There were only two of us drummers in our class. We were able to really be trained on how to read music for snare drum. I’m going to say that has truly been a blessing and a help in my life. So many people have a lot of raw talent, but they don’t learn how to craft it and learn how to read—all the technical stuff that I guess seems boring. But if you don’t learn that, it limits you if you want to become a professional musician.

So that was quite a bit different than what you were used to?

Growing up and playing in the church house, there was no sheet music. You just played by ear and played by the spirit. So learning how to play by ear, and keeping that going throughout my years of high school, and then learning how to read – all that together has helped me as a professional drummer. 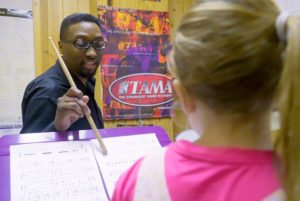 So you are a proponent of band in school?

I am a big Texas band baby. Texas made me. I went all the way through the Texas system, and it’s a great program.

Two times I went to All State as a drummer. It was very exciting. It was really a blessing. We trained, and we learned how to audition, and that helped me to work on my nerves. I’m not sure I could do it today! 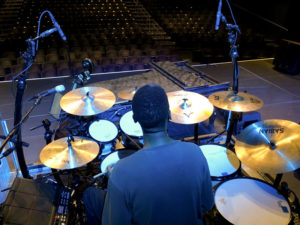 In fact, I’ll tell you a story. When I was a freshman, it was a disastrous year. My band director stopped talking to me my freshman year, because I failed his wife’s class and didn’t get to audition. Instead of reading The Once and Future King, which is about King Arthur by the way, I decided to do the Cliff’s Notes version and failed. My sophomore year, I came back and made it as far as Area. In fact, I actually blanked out on the music. I was in first place, and in the middle of the piece, I just went completely blank. My junior year, I had really come into my own faith and had the attitude of “Lord, whatever happens, Your will be done. You give and take away.” They finally posted the winner sheet, and I was in dead last. I remember thinking in my soul and spirit, “Ok Lord. Your will be done. Just be glad in Me.” I walked outside and was getting ready to cross the street, when someone came running out of the building and said, “Man, they made a mistake! The guy who was in first was last, and the guy who was last is first!” To me, that was a lesson. It really touched me and showed me that the Lord really hears me. 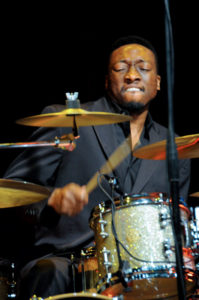 One of the things we noticed from the audience was the apparent joy on your face.

What’s it been like working with Harry for so long?

I’ll say this about Harry. He’s very faithful and loyal. When he hires people in this band, he tends to keep them. I’ve been here 20 years, and a lot of guys have been here longer than me. He’s incredibly talented, and he appreciates talent. It’s a joy to do what I do every day. 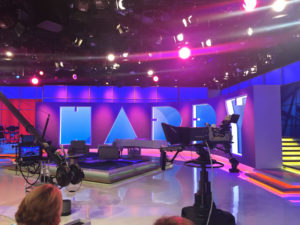 I miss crispy tacos. I have looked everywhere, and they just don’t have those here. It’s also expensive to live here. Apartments are pretty small. One of our band members lives out in Connecticut, so rather than commute every day, he sleeps on my couch a couple of nights a week. 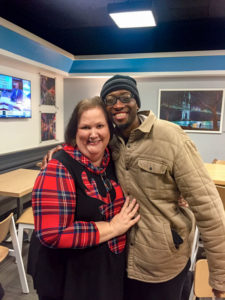 So, today is the beginning of your weekend. What’s on your schedule?

Since it’s the weekend, and my friend is in Connecticut, I think I’ll just sit on my own couch!

Arthur Latin is one of the most genuine and kind persons we have ever met. His interview was filled with honest reflections of a life, like most, that has had its ups and downs. His smile is infectious, his talent is amazing, his lack of skill with current technology had us in stitches, and his faith is inspiring. Thank you, Arthur, for taking the time to visit with Postcards. We are proud to call you friend and look forward to seeing you on the Harry show until we meet again.