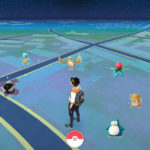 This is the earliest I’ve ever written my column. In fact, I imagine our editor and designers will probably “faint” when they see it. As I write this, our August magazine is still at the printer, and we haven’t begun laying out the pages for September. Why so early, you might wonder? Because I’m experiencing one of the craziest things I’ve ever seen, and thought I’d share.

One thing I didn’t mention is that it is almost midnight as I write, and I am sitting beside the monument at the Texas Prison Museum (told you it was crazy). I am watching oodles of people walk around the memorial in circles, illuminated vaguely by the lights shining on the monument, along with the glow of their phones brightening their faces. Some are in groups, some in pairs. One of the pairs I see are the forms of my own two children. For those of you who don’t know about this craze that has otherwise normal people out at midnight walking and watching their phones, it’s all due to a new online game called Pokemon Go. Game maker Niantic, Inc. decided to do something that would encourage gamers to get up and move, so this is an online game that uses your phone’s GPS while you track down imaginary animals like “Fluffernutters” and “Thingamajigs” (ok, that’s not really what they’re called…but they’re weird, and I can’t remember, so close enough). Gamers go to designated places called Pokestops (which is why I’m here) and gyms to find these creatures, battle against other gamers, and a whole lot more that I have no desire to attempt to describe.

What Niantic probably didn’t realize is that they did some unexpected things, too. I watched a group of people, strangers actually (who wouldn’t normally cross paths), talk to or share with each other, celebrate when they caught a creature or did something good in their game. In general, these folks are just enjoying the time spent with others in their communities. And since Postcards is all about community—I think this is just pretty cool. Still crazy, but cool nonetheless.

Until next time ~ Karen