According to Wikipedia, “In American folklore, Bigfoot or Sasquatch is a hairy, up-right-walking, ape-like being who leaves behind large footprints and reportedly dwells in the wilderness. Strongly associated with the Pacific Northwest (and in particularly Washington state and British Columbia), individuals claim to see the creature across North America. Over the years, the creature has inspired numerous commercial ventures and hoaxes.” 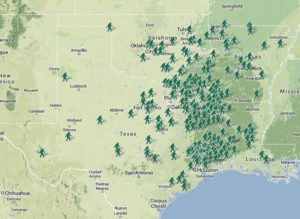 In recent years, Bigfoot has become better known and a phenomenon in popular culture, and sightings have spread. Rural areas of the Great Lakes region and the Southeastern United States have been sources of numerous reports of Bigfoot sightings. The creature has been regarded as the first widely popularized example of pseudoscience in American culture.

Lore of the creature predates the “Bigfoot” name, with Native American culture including tales of sightings. The term “sasquatch” is an anglicized derivative of the word “Sésquac,” meaning “wild man.” The original word, in the Stó:lõ dialect of the Halkomelem language, is used by the Coast Salish Indians of the Fraser Valley and parts of Vancouver Island, British Columbia. Indian tribes across North America have a total of more than sixty different terms for the sasquatch. “Bigfoot” was a journalistic term generated in the middle of the last century during a rash of sightings in Northern California. 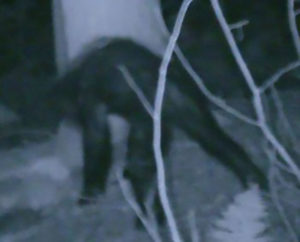 The word has come to be recognized widely. Many different terms have been used by pioneers and later non-native inhabitants of North America, including “skookums” and “mountain devils.” Other areas of the world have similar sightings and stories of the creature, with their own localized names.

About one-third of all claims of Bigfoot sightings are located in the Pacific Northwest, with the remaining reports spread throughout the rest of North America. Most reports are considered mistakes or hoaxes, even by those researchers who say that Bigfoot exists.

Individuals claim to have seen Bigfoot, describing it as a large, hairy, muscular, bipedal ape-like creature, roughly 6–9 feet tall, covered in hair described as black, dark brown, or dark reddish. The enormous footprints for which the creature is named are claimed to be as large as 24 inches long and 8 inches wide. 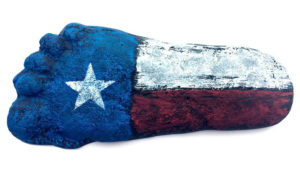 There is physical evidence found in various areas across the country—distinct tracks that do not match other animal tracks, hairs that match each other but no known wild animals, and large scats that could not be made by any known species. The largest hurdle for skeptics, including most scientists, is that no fossils or remains have been found and documented. Mainstream scientists do not consider the subject of Bigfoot an area of credible science, so there have been a limited number of formal scientific studies of Bigfoot.

There are several organizations dedicated to the research and investigation of Bigfoot sightings in the United States. The oldest and largest is the Bigfoot Field Researchers Organization. BFRO also provides a free database to individuals and other organizations. Their website (bfro.net) includes reports from across North America that have been investigated by researchers to determine credibility.

According to the BFRO database, in Texas, the number one county for recorded Bigfoot sightings is…wait for it…Montgomery County, followed by Liberty County a close second. Seems these Piney Woods of ours hold some mystery and intrigue. 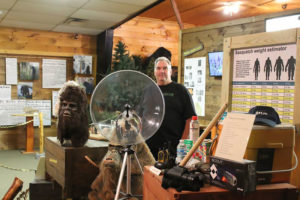 Enter Russell Miller, a construction worker from Pasadena, Texas. He and his wife Michelle are avid seekers in the Bigfoot arena. Several years ago, they were with their teenage children ghost hunting and looking to make EVP recordings (electronic voice phenomenon), another hobby, near Saratoga. They had checked out the Bragg Light, and were off a backroad near a cemetery about 2 AM when they had an unexpected Bigfoot encounter. “We heard a whistle and a branch crash, then there was something smashing through the underbrush on two feet. It really freaked us out.” 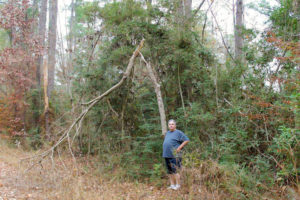 So they expanded their family hobby to include Bigfoot searches. Since that first encounter, they have spent a lot of nights in the woods, made numerous audio recordings, gathered other physical evidence, and had another close encounter in Jefferson County where an 8 foot tall “something” passed by a street sign about a quarter mile away from their position. Miller is proud of his audio recordings, saying, “No other animal can make these types of noise.” 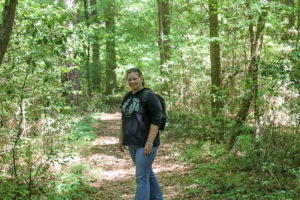 The couple spends a lot of time on their searches in the Sam Houston National Forest, since that seems to be a Texas hotspot. They have also attended Bigfoot conferences in the past, but the closest one to their main search area is in Jefferson County. Miller believed it made sense to have a conference closer to the hotbed of activity to raise awareness, interest, and information exchange. So, he searched out a venue and has organized the first Southeast Texas Bigfoot Conference to be held locally in April in Huntsville. “Over the last few years, with the internet and reality shows, Bigfoot has become more mainstream,” said Miller. “You’ve heard of the ‘Six Degrees of Kevin Bacon’? I believe in the two degrees of Bigfoot. Either you, someone you know, or someone they know has a Bigfoot experience or story. A lot of people have stories. It’s just getting them in a setting where they are comfortable to share.” Miller also shares that he has people, including co-workers, poke fun for his pursuits, but—“When they get alone with me, they are curious and want to share experiences or ask questions. Of their ventures, Miller says, “We aren’t crazy. We are just a normal family who are curious and like to have fun. This is our fun.” 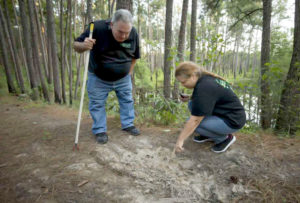 That opportunity comes on Saturday, April 21, as believers, doubters, skeptics, and the curious are all invited to come together at the Southeast Texas Bigfoot conference. The conference will be from 9:00 am to 5:00 pm at the Walker County Fairground in Huntsville. In addition to a slate of knowledgeable speakers sharing their research, there will be an evidence collection demonstration, food vendors, merchandise, information, children’s activities, door prizes, and even a Bigfoot calling contest. There will also be a silent auction, with all proceeds going to Lucky Fin Project and Honor Flight Network. 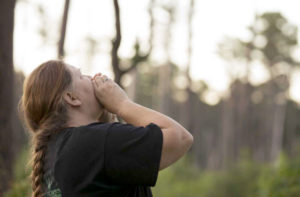 A premium advance ticket pre-conference event will be Friday, April 20, at 6:30 PM, a barbecue dinner with the conference speakers.

Advance tickets are available at Eventbrite.com. Advance conference tickets are $10 for children (12 and under) and $20 for adults. Premium tickets which include the dinner are $60. There are a number of upgrade options, as well as information for interested vendors or sponsors.

Tags:
Previous Article
A Day in the Life: China House’s Cathy Ho
Next Article
Do You Know? Larry Foerster