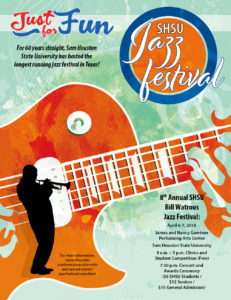 Jazz. It’s an American-born phenomenon that began on the streets of New Orleans, but didn’t stay there. With sounds as eclectic as the communities that have influenced it, jazz has traveled the world over and morphed over the years to encompass a wide range of musical styles from big band swing to romantic ballads. Powerful enough to start a dance craze and smooth enough to set the scene for a romantic moment, jazz is the basis for countless popular songs and movie scores, made famous by the likes of Dizzy Gillespie, Glenn Miller and, Frank Sinatra.

Walk through the halls of the Sam Houston State University music department on any given day, and you may not know you’re walking in the footsteps of some of the most famous jazz performers of the past century.  You may also be lucky enough to catch a tune being played by some of the great jazz artists of the future. Jazz has a rich history in the university’s music program, and it is only getting stronger under the leadership of Dr. Aric Schneller, Director of Jazz Studies. 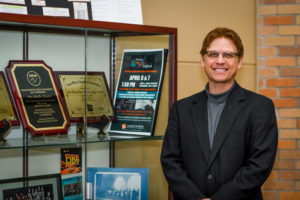 Standing next to a display case in the performing arts center, sporting a classic gray turtleneck under a black jacket, Schneller beams with pride when talking about the school’s alumni accomplishments. A former opera singer turned jazz trombonist, Schneller himself is an acclaimed Yamaha Performing Artist, composer and music producer, as well as a voting member of the National Academy of Arts and Sciences Grammy Awards. To say that he gets “jazzed” about sharing his love of music is an understatement. 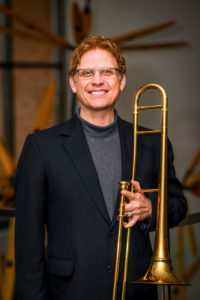 For 60 years straight, Sam Houston State has hosted the longest running jazz festival in Texas, bringing together the best jazz musicians in the country with high school and college jazz band students. It was started by jazz composer and arranger Robert “Doc” Morgan, who taught at SHSU before leaving to chair the music department at the High School for the Visual and Performing Arts in Houston. In spring of 2011, Schneller brought living jazz trombonist legend Bill Watrous on board, and the festival became one of just a handful of prestigious named jazz festivals in the United States.

On April 6th and 7th, the university will open its doors once again with the 8th Annual SHSU Bill Watrous Jazz Festival, to be held at the James and Nancy Gaertner Performing Arts Center. There, visitors can immerse themselves for two full days and nights of world class jazz, learning from the greats and hearing performances from professionals and students alike. Before the weekend activities are through, two students will also have the opportunity to earn a $1,000 college scholarship to Sam Houston State’s music school.

While jazz bands from around the state will be competing in the festival, it is open to the public as well. Music lovers are invited not only to attend the Friday and Saturday evening concerts, but also the mid-afternoon free music clinics by featured guest Schilke Performance Artist Marvin Stamm, considered to be one of the greatest jazz trumpeters in the country. In addition to his individual work, Stamm has played and recorded with music greats Frank Sinatra, Benny Goodman, Lena Horne, and Quincy Jones, just to name a few. 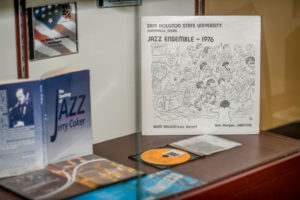 “The clinics are a real treat,” Schneller says, explaining that the sessions are much more than just musical instruction. “It’s not instruction in one instrument alone. There is a lot to learn about musical style, interpretation, performance, practice, and technique. The artist will talk about his life and experience with jazz, as well as the future of jazz. The clinics are interactive as well, so each one is a little different.”

Schneller describes Sam Houston State’s jazz festival as a jazz celebration. “It’s all about sharing the joy and passion of jazz music with students. For experienced artists, it’s about giving back.” 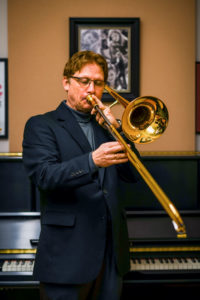 In addition to Watrous and Stamm, the festival concerts will also feature the SHSU Jazz Ensemble, considered one of the best collegiate jazz bands in the country (with a number of jazz live performance CDs to its name). There are also a number of well-known artists who will be coming in as adjudicators and clinicians: jazz composer and arranger Rich DeRosa; jazz bassist and former Glenn Miller Orchestra member Anthony Caceres; jazz pianist Luis Marin; alto saxophonist and TCU Director of Jazz Studies, Joseph Eckert; and saxophonist and recording artist Woody Witt, who is also the booking agent for Cezanne’s Premier Jazz Club in Houston.

“The guest judges perform, as well as giving private clinics,” Schneller explained. “For jazz students, listening is as important as playing. Jazz has a language of its own, and to experience it fully, there has to be give and take. It is a conversation.”

Pointing out that jazz is a musical genre most often performed today in small clubs or in school settings, Schneller gives a brief history of jazz in order to illustrate its importance in American culture. 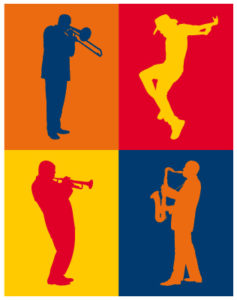 “Bebop and swing are two styles of jazz that became huge during the 40s. Why? Because you could dance to it!”

Continuing on into the 1980s, he talks about how Kenny G brought jazz into the mainstream with a pop-ish feel. “It made it more accessible, opening up the jazz world to non-traditional jazz lovers.”

Since then, he said, many jazz musicians have found themselves playing behind the scenes in music studios and even in other genres. “Most people don’t know that Miles Davis played with rock musicians, and Wynton Marsalis played with Willie Nelson.” 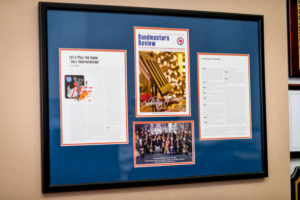 Schneller says that traditional jazz musicians don’t always appreciate the jazz artists who have blended into modern pop culture, feeling like they have watered down the genre or sold out, but he disagrees, saying the music has just been popularized. He is confident that at the SHSU Bill Watrous Jazz Festival, there should be plenty of jazz styles to please just about everyone’s musical tastes. While there are no plans for rock or country superstars to be in attendance, the hundreds of festival participants should find plenty to be jazzed about.