Just for Fun: Send in the Clowns 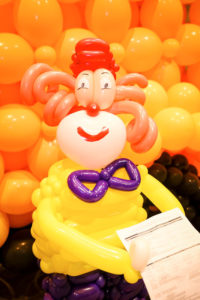 Although an old-fashioned form of entertainment, the art of clowning is still alive and well. Small clowning clubs thrive on the energy and dedication of many longtime members. Postcards received an invite to a recent convention of the Texas Clown Association, which was held in Montgomery. Upon arriving, we were greeted warmly and discovered the hobby is composed of some of the kindest, happiest people you would ever have the pleasure of meeting. Upon entering the convention, I had the pleasure in the lobby of meeting a clown named Heart (Theresa Stokes by day) who was not in costume, but in jeans and a T-shirt, with a pass on a lanyard around her neck. Some who came for entertainment are in character, along with those performing in tonight’s skits—red noses pressed onto dramatically painted faces, accompanied by a bright and whacky ensemble of different colors and patterns. When asked how her love for clowning began, Heart said her grandfather would bring her Blue Magic magazine when she was a young girl, and ever since, she fell in love with clowning and aspired to be one. Heart inadvertently made a wonderful first impression for the involved lot, and we did not meet an unfriendly or dull soul for the remainder of the night. 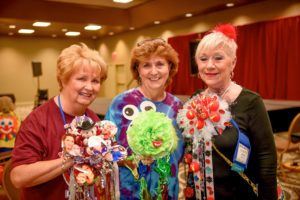 Mary Whipple, who goes by “Charmin,” invited Postcards to the event. Along with the others who greeted us upon arrival, she was immediately welcoming and spoke with us as if we were old friends seeing each other again. Friendliness radiated from these people in every way, and there was a hint of animation in their faces that is rare to come by in a crowd of regular John Does. The crowd tonight is predominantly middle-aged folks, with a sprinkle of younger and older in there, with many of the people present having been regulars of the convention and other events for 20-30 years. The evening begins after an introduction, and many skits are in store for the night; stretching over the next few hours, the walls of the large room will have heard many laughs and absorbed a lot of purely innocent happiness. 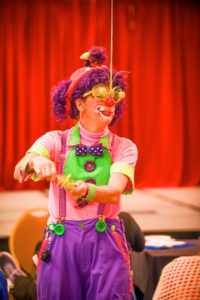 The crowd seated around the stage is a sight to be seen, many purveyors clad in their own clown personality and in full costume—wild hats, glasses, hair, and face paint. The first skit drew a big laugh from the crowd, and during the short recess of time it took for the judges to score the performer, a man with a microphone tells a few jokes to keep the spirits high. During the following skit, a female clown changes a blank coloring book to one full of color while wearing a spin top hat. A woman sitting to my left laughs heartily at every probe, and upon observing her joy (and a pair of beaded clown earrings hanging from her earlobes), I can’t help but smile at her; the joy is contagious. One of the jokes during this intermission is “Dear Algebra, stop looking for your X. She’s not coming back and you’ll never know Y.” 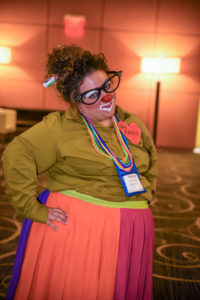 During the intermission, Postcards has the pleasure of talking to Trinity resident Tiffani Goodin, who goes by “Fanci” in the clowning world. While in junior high, she did a clown skit in a production; this experience stuck with her, and she always enjoyed it. By day, Tiffani works for TDCJ in Huntsville and enjoys clowning at local events like Walker County Fair and Fair on the Square. She went to clown school in Houston in 2013, a process of a few weeks that teaches you the need-to-knows of the art. Since then, Fanci has become an active member in Cheerful Clown Alley. This group in particular’s main passion is dedicating their time to philanthropic events as well as hosting a local clown school for those aspiring to join their ranks. As professional clowns, they aim to bring laughter, love, and smiles to many people who are in hospitals, or at local nonprofit events and approved fundraisers. When asked what being a clown means to her, she responds that their efforts are driven by the desire to volunteer and spread joy to others. The unique crowd drawn to the event center tonight is linked by many close friendships that have been formed and nurtured for many years, with some of them claiming to be like family to one another and meeting lifelong friends. Tiffani tells us that the main goal of everyone who clowns is to help people through tough times by providing some comedic relief and bringing about some laughter. Tiffani admits to getting the title of “class clown” in high school, but hey, if the shoe fits! 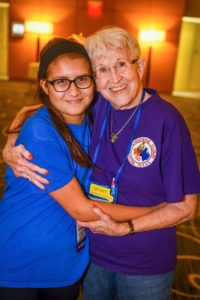 Postcards sits with two more ladies who are many years apart in age, but close in friendship and heart. The oldest member of the Texas Clown Association, June “Cricket” Hinkle, is 89 years young and has been clowning for almost 30 years. While her husband was going through cancer, a couple of men in his support group were members of Clown Alley, which is how Cricket got introduced to the clowning world. In January 1989, her husband died, and she enrolled in clown school that same year. She says that, after all of these years being involved, the friendships made are by far the best part, this year’s convention being her 30th to attend. One of her favorite efforts of the club is monthly visits to Texas Children’s Hospital, dressed up and ready to entertain children with balloon making, skits, and silliness.

On the opposite end of the scale we have 13-year-old “Nannah Banana,” the youngest clown in the TCA, who enjoys involvement in her school theatre group and clowning in her spare time, as well as participating in local parades. Seemingly reserved and quiet at first meeting, she sits in her glasses and waits for questions with a blanket draped around her shoulders. She would probably be one of the last kids you’d guess would wear a bright red nose and perform humorously, because of her reserved and mature demeanor. Wearing a sweet smile, she explains how she got her police officer father involved, and he is now clowning himself. Aside from clowning, she’s your average gal who enjoys playing sports like track, basketball, and swimming. 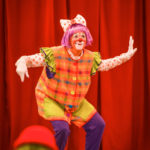 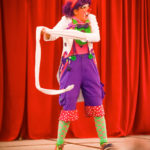 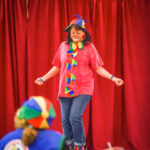 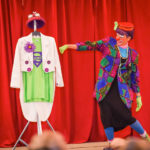 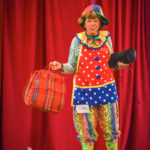 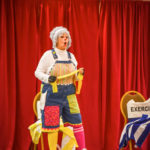 The intermission is followed by more skits and a conversation with Judy “Peep” Cornett (wearing a bright bowler hat), President of the Texas Clown Association, member of the local club Clown Alley, and member of Clown of America International. A clown for 19 years, her favorite things to do are volunteer activities like hospital clowning. She knew she wanted to be a clown when she realize her insatiable desire and satisfaction of making people smile. Clowning has taken Judy as far as Italy; she plans to finish her term as president and remain involved and committed to the cause. “A good clown performs from the heart,” she adds.