Just for Fun: Hockey Anyone? 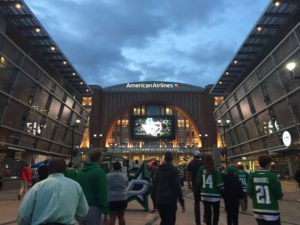 During the fall months, it seems the only sport we ever hear about in Texas is football. While football is a big deal, especially in the South, there is another major sport season that overlaps and is often forgotten—hockey season. If you have never been to a hockey game, I would say it should be a requirement to go at least once. There is just something about the ice, the lights, and the fans that make it so different from any other sport. While your immediate thought of hockey may take you to places of snow, freezing weather, and Canadian bacon, there is actually a team right here in the Lone Star State… the Dallas Stars. And the best part? They are actually good. The Dallas Stars have taken a nontraditional hockey fan base and exploded it, bringing hockey back into the South. 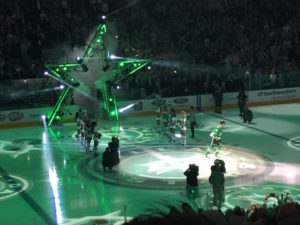 The Dallas Stars are one of the only ice hockey teams in the southernmost part of the United States, excluding the two teams in Florida. The Stars are based in Dallas, Texas and are members of the Western Conference of the National Hockey League (NHL). The team was founded during the 1967 NHL expansion as the Minnesota North Stars, based in Bloomington, Minnesota. To make the story short, the franchise relocated to Dallas for the 1993-94 season, and the Stars played in Reunion Arena until 2001. The team then moved to the American Airlines Center, where they still play today. The Dallas Stars have been one of the most successful sports franchises in Dallas, making 12 playoff appearances since 1993, which ties them for the most in the city with the Mavericks. 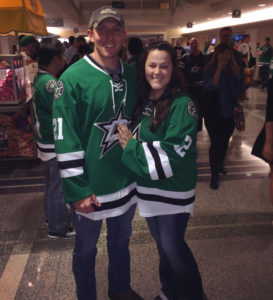 The Stars have won eight division titles in Dallas, two President’s Trophies as the top regular season team in the NHL, the Western Conference championship twice, and in 1998–99, the Stanley Cup. (The Dallas Stars became the first NHL team based in a sub-tropical city, from the 35th parallel north to win a Stanley Cup.)

Postcards had the opportunity to go to a Dallas Stars game on October 13th for their season opener. If you are interested in experiencing a game, we wanted to give you some details and tips. We used Ticketmaster to purchase our tickets, and the prices range from $10-432 per ticket, depending upon where you would like to sit. There is also a difference in price between regular games and what are referred to as premium games. Premium games are games against very popular teams or rivals, so (naturally) these games are more expensive. I will say there really is not a bad seat in the house, but for this particular game, we saw a regular season game and sat at the back of section 108.

The travel time to the game took us about two and a half hours. I highly recommend getting there at least 30-45 minutes before game time. Not only will you be there in time to witness the cool pregame festivities and presentation, you will also find it easier to park the sooner you get there.

When we attended, the pregame presentation was a tribute to honor the fallen Dallas police officers who were killed in the July 7th ambush. All the Stars players wore fallen police badge emblems on their helmets in their memory. www.postcardslive.com/dallas-stars-tribute

When we arrived, parking was not hard to find, although we did pay $15 to park. Most places around the area require a payment, but most vendors take cash and card. If you do not want to pay to park, you can park further from the Airlines Center—it just depends on how much walking you would like to do. Our walk was just across the street. Another tip—I would suggest to eat before you come. Although there are lots of food options, the food is rather expensive (I’m talking $10 for a gourmet hotdog expensive). However, everything I saw looked and smelled really good. 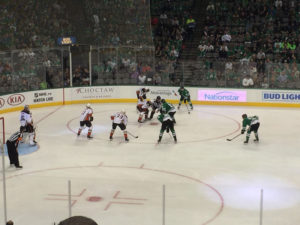 Overall, the atmosphere was very family friendly. In fact, there weren’t many places I looked that you couldn’t spot a child enjoying the game right along with their families. I was impressed to see players giving kids warmup pucks along the boards before the game. If you do choose to go, make sure you wear a green shirt! The whole arena will be scattered with Stars jerseys…not a soul was wearing a “regular” colored shirt (well, except the other team’s fans, of course). Another neat aspect of the Stars game occurs during the national anthem. Every time the word “star” is sung in the anthem, all the Dallas fans yell “STARS!” You could just feel the patriotism and the unity in the arena. The Stars have also hosted a home game on New Year’s Eve every year since 1997–which now coincides with the Big D NYE celebration on the south side of the arena in AT&T Plaza. 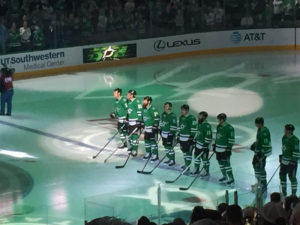 Hockey is played in three game periods, with intermissions between each. The fun at the Stars games continues during the intermissions with videos and even games on the ice like “human bowling” with fans picked from the audience!

Dallas Stars fans are some of the best I have seen. They stand, they cheer, they scream, they chant, especially when they score! I highly recommend making the trip to a Dallas Stars game. Whether you are a former Houston Aeros hockey fan, a hockey fan in general, or this would be your first hockey game ever (like this one was for me), you will not be disappointed with the fun you will have.

Hockey season runs October through April. Check out the team, including promotions, news, stats, and even an app at www.nhl.com/stars.

Tags:
Previous Article
Day in the Life: Rob Tieperman
Next Article
Do You Know? Alisa McCorquodale