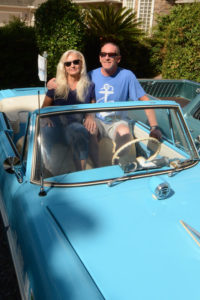 The aquamarine-blue convertible rolls up to the boat ramp, but bypasses the parking lot. Instead, a few precautions are taken and, as “Anchors Aweigh” blasts from the speakers, the car is driven down the ramp into Lake Conroe. Now a boat, it floats admirably on the lake. Its twin propellers allow it to cruise at about five knots, with water splashing on the hood and splattering the windshield. It is a rare Amphicar, almost certainly the only one in the Lake Conroe area, and one of only a handful in Texas.

The driver (and captain) of this Amphicar is J. B. Edelstein, a resident of Walden. J. B. was first introduced to Amphicars when, at five years old, he visited his uncle in Schenectady, New York. With help from a neighbor, J. B.’s uncle had cooked up some fun. The neighbor picked up J. B. for a ride in his car, but didn’t let on that it was an amphibious vehicle. When he splashed right into the water, “I laughed so hard I may have wet myself,” J. B. says with a smile. The neighbor let his young passenger drive the boat, and the experience left a lasting impression. From that point on, J. B. wanted to own an Amphicar.

Amphicar ownership was never practical for J. B. until he and his wife Cat lived in the San Diego area near Lake Miramar. In 1998, J. B. found a 1964 Amphicar at a used car lot. Cat wasn’t sure about the purchase, but J. B. was willing to negotiate: she got a trip to Europe, and he got the Amphicar. They have been having fun with their amphibious car ever since. 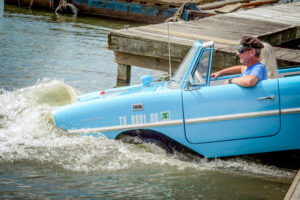 “The car that swims”

Great technological advances during World War II allowed amphibious vehicles to be built for military applications; after the war, Hans Trippel, a German inventor, hatched the idea of mass producing amphibious cars for civilian use. From 1960 until 1968, nearly 4,000—3,878 to be exact—Amphicars were manufactured. They were the first, and remain the only, mass-produced amphibious vehicles ever made. The target market was America, and 3,046 of the amphibious vehicles were imported to the U.S. from 1961 until 1967. Depending on the year, they had sticker prices from $2,800 to $3,300. Amphicars were available in only four colors: white, red, aquamarine blue, and seafoam green. Perhaps the most noteworthy of early Amphicar owners was President Lyndon B. Johnson, whose Amphicar, like J. B.’s, was aquamarine blue. 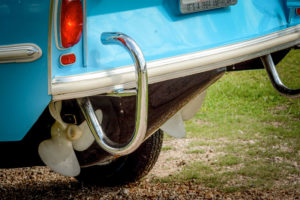 The Amphicar, because of its double function, has a few necessary quirks. For example, doors must be closed and then locked firmly into position to ensure a waterproof seal. In the event of a minor leak, a bilge pump comes to the rescue to pump out water. The Amphicar has a dual transmission, which allows wheels and propellers to be used either alone or simultaneously. While the land transmission is a “four on the floor,” the water transmission has two-speeds: forward and reverse. The engine is in the rear of the vehicle. Texas law does not give Amphicar owners a break: amphibious vehicles must be registered as both cars and boats, and all Coast Guard-required equipment, including a life jacket for each passenger, must be on board. 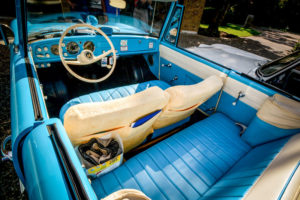 The Amphicar can purportedly attain 70 miles per hour on land and 7 knots on water, so it earned the moniker “Model 770.” Realistically, J. B. says, he can comfortably reach about 60 miles per hour on land and about 5 knots on the water. The Amphicar, which runs on regular gasoline, gets respectable mileage. “A tank of gas will last me all day out on the lake,” he says, and estimates that he gets 30 miles per gallon on land.

In comparison to high-performance cars and boats that specialize in one mode of transportation, the Amphicar does not excel on either land or water. “It’s not a great car and not a great boat, but it does both,” Cat says, an assessment that led J. B. to coin the phrase, “It’s the best-handling boat on the road and the best-driving car in the water.” The Edelsteins occasionally drive their Amphicar on Highway 105 (but never on I-45); however, they spend more time with it in the water than on land. Although not ideally suited for long trips, Amphicars have successfully traversed the English Channel and have traveled from Long Beach, California to Catalina Island, a distance of roughly 29 miles. 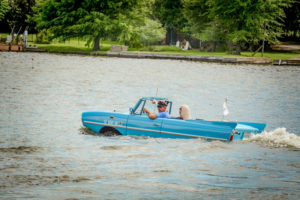 Amphicars can be practical for people who live on islands; however, J. B. estimates that the vast majority of Amphicar owners use their vehicles purely for recreational purposes. J. B. should know: he was the president of the 350-plus-member International Amphicar Owners Club from 2005 through 2006. Each year, members (and their Amphicars) convene in Celina, Ohio. While attending such gatherings, the Edelsteins discovered that Amphicar owners represent an eclectic variety of humanity with little to no commonality other than eccentricity. “It makes it really fun,” Cat says. 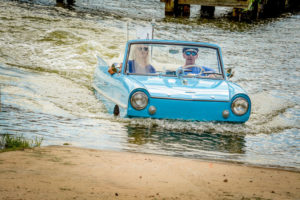 Having owned an Amphicar for 20 years, J. B. acknowledges that there are a few things that aspiring Amphicar owners should know. For one, Amphicars should never be taken into salt water. J. B. hypothesizes that many Amphicars met their demise because owners were unaware that they were originally intended for fresh water only. He believes that there are only about 500 Amphicars still in existence today. Auction websites, including eBay, typically have about one Amphicar on auction per month, he says; depending upon a vehicle’s condition and seaworthiness, auctions usually fetch prices from $50,000 to $100,000.

Another helpful bit of advice is to close doors firmly, and then latch them in place to provide a good seal before driving an Amphicar into the water. J. B. and Cat learned this the proverbial “hard way.” When they first purchased their Amphicar, its owners’ manual had long since disappeared, and their initial water launch nearly ended in a sinking disaster. 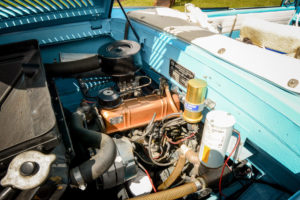 Finally, Amphicar owners should ideally be mechanically-inclined. Keeping up with the maintenance on his Amphicar, J. B. says, is like performing the maintenance for a car, a boat, and a trailer combined. Surprisingly, however, parts for Amphicars are commercially available. When the Amphicar factory stopped production, a California businessman bought the company’s inventory of parts and opened an Amphicar parts store that is still in existence today. 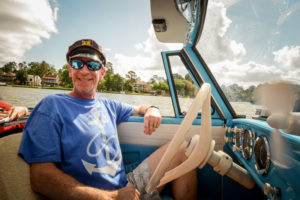 J. B. has no plans to sell his Amphicar. He and Cat take it out on Lake Conroe a few times each month, usually on days when the lake is calm and uncrowded. “Toys are made to be played with,” he says. Apparently, J. B. and Cat also believe that toys are meant to be shared. They generously give rides to visiting family members, friends, and even interested onlookers. If passengers are children, the Edelsteins sometimes keep the vehicle’s amphibious capabilities a secret until the vehicle drives into the water, hopefully inspiring the next generation of Amphicar lovers. Sharing the fun, in fact, is what has made Amphicar ownership such a good experience for the Edelsteins. “It makes people smile,” Cat says.