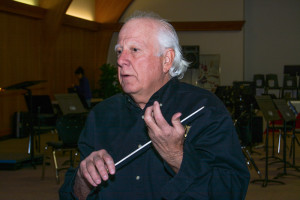 Dr. Don Hutson, the conductor of the Conroe Symphony Orchestra, raises his baton, and musicians begin rehearsing “L’italiana in Algeri” by Gioachino Rossini. “Bravo!” Hutson exclaims several times. He coaches the orchestra on such technical matters as articulation, the relative length of quarter notes and eighth notes, and accents. “It’s not dum-dum-dum-dum-dum-dum,” he says, “it’s dum-dum-dum-dum-dum-dum!”

As on most Tuesday evenings, the CSO is preparing for an upcoming concert. First founded in 1997, the orchestra’s members include about 60 dedicated professional and amateur musicians of all ages, from high school students to septuagenarians, with a mission of “adding to the cultural enrichment of the community, assuring a better quality of life for the Conroe area.” Six founding members still play in the symphony. 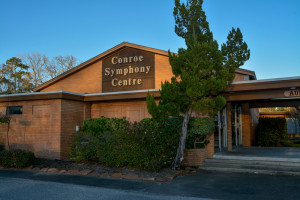 “When we first started, we were just getting together to have fun,” says Stephanie Sears Harris, a 911 dispatcher, private flute teacher, and founding member of the CSO. “A lot of us played in school—either high school or college or both—and just wanted to get together and play. It has evolved; now we have many professional and more proficient players.”

“Everybody here is a professional in the truest sense of the word,” Hutson interjects. “They profess music. That is why it works.” “This is a great group,” agrees Dr. Sheronna McMahon, orchestra director at Mitchell Intermediate School and the CSO’s concertmaster. “It’s great to work with Dr. Hutson. We are not the Houston Symphony. We have other jobs, but we love to make music together.” 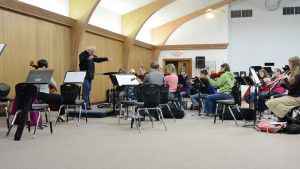 Hutson holds a doctorate in musical arts and was a collegiate music educator for many years; however, he became disillusioned with academia and left the teaching profession. In 2002, he formed his own business, Cowboy Solution, which teaches leadership and team development to corporate clients worldwide, using horses as facilitators. He joined CSO for one concert in 2005 and has been conducting the orchestra ever since.

“Music is an art form based in time and not in space,” he says. “My job is to take all the dirt off of it, and polish it up so you can see what it’s supposed to look like. I get the chance to reveal it. I want to share this beauty and this unexplainable passion with my friends. Why wouldn’t you want to share something good with your friends?” 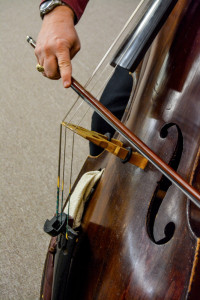 The CSO performs five concerts each year. Although the orchestra usually plays one popular piece at each concert, it concentrates on classical music because of its timeless beauty. “Classical music has been popular longer than you are old,” Hutson says. “I can guarantee you that my grandchildren will know who Beethoven and Brahms are.”

The music may be classical, but there is nothing stuffy about a performance of the Conroe Symphony Orchestra. “Our goal when you leave a concert is for you to say ‘Wow,’” Hutson says. Audiences sometimes clap along, he says, and at one recent concert, some attendees enjoyed the music so much, they literally danced in the aisles. 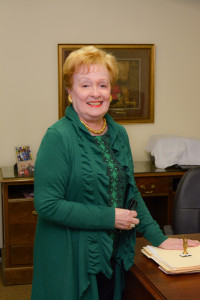 Gayle Laminack, president of the CSO Board of Directors

“I have never seen a conductor who has such a good rapport with the audience,” says Gayle Laminack, president of the CSO Board of Directors. “The first time I went to one of his concerts, I was surprised to hear so much conversation from the podium. In big towns, big symphonies, it’s very solemn. He loves to bring the children up on stage. The audience adores him.” Hutson, however, insists that neither he nor the musicians are the stars of a CSO concert. “There are no stars,” he says. “The music is the star.”

The orchestra plays a variety of music to suit the theme of each concert, but one selection has been so popular with audiences, it has a permanent place on the program. A medley of the songs of each branch of the armed forces is played at the CSO’s patriotic concert each summer. “That is the only piece besides the Star Spangled Banner that is required in our program every year, because the people out there deserve it,” Hutson says. “We do it to honor people who have served their country.”

The CSO’s vision is to “be recognized as one of the outstanding community orchestras in the State of Texas.” To achieve this, the organization has three groups: the orchestra itself, the Friends of the Symphony, and the Conroe Symphony Youth Orchestra.

The Friends of the Symphony organizes a cadre of volunteers who devise fundraisers and events that help defray the costs of producing the orchestra’s concerts. Ticket sales, Laminack explains, do not cover production costs, which include venue rental, music, posters, security, and the salaries of the conductor and some of the principal musicians.

Meanwhile, the Conroe Symphony Youth Orchestra nurtures talented young musicians with the ultimate goal of bringing them into the CSO. The CSO also reaches out to the youth of the community by encouraging concert attendance and the appreciation of good music. One way the organization is working toward this goal is by collaborating with the Conroe Art League and sixth grade art teachers. During art class, students will be instructed to draw whatever comes to their minds while they listen to John Williams’ “Jurassic Park.” The drawings will be judged; the winners will be displayed at the Conroe Art League’s gallery and at a CSO concert. The winners and their families will be invited to attend the concert as guests of the orchestra.

“You always remember the first time you went to the symphony,” Laminack says. “You remember who took you and it’s a memory you never forget. That’s what we are trying to do for the children, so they will want to come back. Should they decide to take up an instrument, so much the better. We want it to be a lifetime thing.” Hutson agrees. He vividly remembers a young boy who approached him after a CSO concert. “He asked, ‘Are you the conductor man? I went to the concert and I loved it. It was fun.’ That made my day,” he says.

While professional musicians earn their livings by performing music, members of the CSO spend their days working or parenting, then arrive in the evenings for several hours of concentrated rehearsal. For Hutson, the best part of conducting the CSO is being able to work with these dedicated musicians to prepare music for the enjoyment of local residents. “It’s a great organization,” Hutson boasts. “We have great people behind the scenes. They go above and beyond. We have board meetings that are fun! Nobody wants to leave and go home. Why? Because we have a noble purpose.” 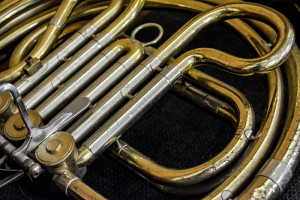 Noble, yes, but ask CSO musicians why they participate and they will probably mention the personal enjoyment of being a part of a community symphony orchestra. “It’s fun doing it. We have a blast. We work and we work hard, but we enjoy it. We have fun,” Hutson says. “We play for a reason. We have a higher purpose for what we play. Our people play to make lives better for the people who come to our concerts.”

For more information about the Conroe Symphony Orchestra, or to audition for membership, visit the CSO’s web site at www.conroesymphony.org or call the CSO office at (936) 760-2144.