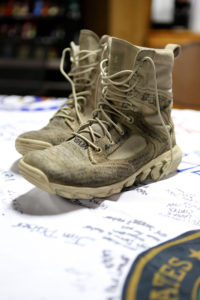 With much of the recent rains covering lower East Texas keeping forecasters busy, Ken Meyer finds himself a man on a mission as well. His 628 mile “Never Quit March” across East Texas is raising much more than awareness about a condition that affects more than a quarter of this nation’s veterans, and (to an alarming degree) first responders as well.

“The first thing I want the public to know is that we are experiencing post-traumatic stress (PTS). This is not a disorder,” Meyer, a veteran of the United States Air Force Security Police explained. “If a person suffers a back injury, you wouldn’t say he has a disorder. This may seem subtle, but it drastically changes the way America will begin to deal with this problem.” 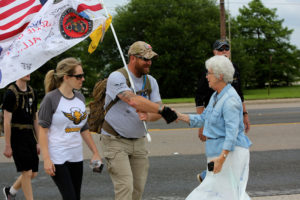 Charlotte Oleinik, founder of the H.E.A.R.T.S. Museum, greets Ken as he finishes this leg of his journey

According to Meyer and a number of leading professionals, the condition of post-traumatic stress can manifest itself in a number of forms. “One way this condition affects an individual is in their relationships with others. Sometimes the obvious is seen with hyper-vigilance. That’s when someone with PTS is on constant guard against danger in the physical sense. But it also affects the emotions. We all face emotional trials, but for those who suffer from PTS, the strain from hyper-vigilance against emotional danger is equally important.” It is this unspoken hurt in trying to be the best you can be that does the most damage. 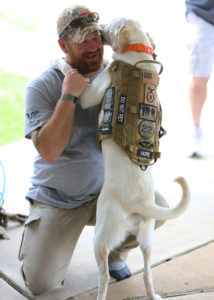 “I think that’s because due to this condition, we tend to isolate ourselves. For a number of years, I found myself missing in action—missing from my family and the closeness of my wife. I went for a long time, and I just couldn’t figure out why I was so withdrawn.” Meyer, like so many veterans, went for more than a decade with his condition unknown and undiagnosed. Yet, he was one of the fortunate ones.

After his tour of duty ended, Meyer made what he thought was a transition to civilian life. “I became an emergency responder for the United States Occupational and Safety Administration (OSHA),” Meyer said. “I poured myself into my duty just as hard as I did in my military career. I never complained. As part of my duties, I was involved in the investigations of fatalities that occurred on the job or at worksites. We were there during recovery from the devastating hurricanes of Katrina, which destroyed New Orleans, and Rita, that hit the region again while it was still recovering. We were even there during the horror of the aftermath of the World Trade Center attacks (9/11).” 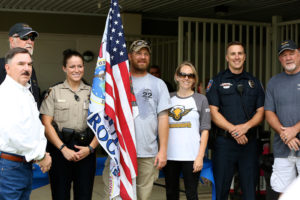 What happened next would change the course of Meyer’s life. “Back in 2007, I was attacked by a grizzly bear. It was during that life and death struggle that I came to grips with a condition that was unknown to me, but was affecting every area of my life. That’s when I sought help.” Meyer would learn that the “condition” affecting him was post-traumatic stress “not new” undiagnosed. Doctors determined that, at some point during his military career, he had fallen through the cracks. 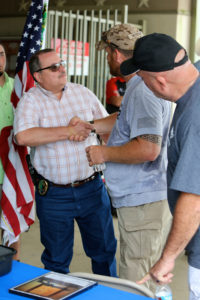 “For years I struggled with this and could not figure out what it was. After that, like every vet, I needed a mission, and I made raising awareness and providing possible solutions a mission all can get on board with.” Meyer became involved with the Lone Survivor Foundation, as well as participating in its retreats to Crystal Beach.

“That was really therapeutic for me, because after so many years of just dealing with this alone, I felt I was running on fumes. I was on empty. But I started getting recharged. It’s a funny thing…when you are lifted out of darkness, you begin to see others.” With open eyes, Meyer organized the “Never Quit March” in an effort to educate, inform, and inspire.

What many may not know is that, in spite of his condition, the federal government has denied him disability. “This condition is a very real thing that the military has known about for years. And, as part of the solution, the government should provide some form of financial compensation to all those with this diagnosis,” Meyer said. 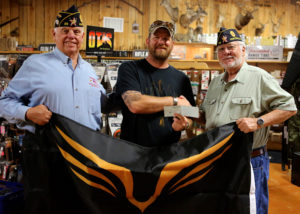 “The solution has another aspect as well, and that is for the family. Families have to learn the signs of PTS and learn to try to understand and listen. I mean really listen. I think a number of people get the wrong idea when it comes to money. We served and would do it again. We love this nation and would do it again, but we were injured and something must be done. We are not beggars. We represent the ideals of this country and were willing to back it up with our very lives.”

The idea of the road march was, for Meyer, something that can’t be a quick demonstration. He likens it to good food cooked in a slow cooker compared to a microwave. “Every step I take is for all of us. I never thought this would take on a life in itself,” he said. Again, he is one of the fortunate ones. According to statistics, most veterans who suffer from PTS are in the shadows of society, but never a part of it. 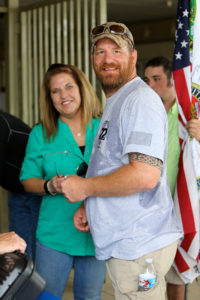 “We chose to serve. But we were injured, and all we ask of our nation is to just do right by us. This country will never live up to its potential until it takes care of those who risk everything to protect it. A person can sit back and complain or make it known that we have a problem, but let’s not stop there. Let’s come up with a solution, too.”

With more rain in the forecast, Meyer must move on. He has a mission to complete. Each day he marches 19 or 22 miles. “I’ll do 19 miles for the ones lost in Operation Red Wing. (Marcus Luttrell was the only survivor), or 22 miles for the number of veterans each day that lose their battle with PTS,” Meyer said. 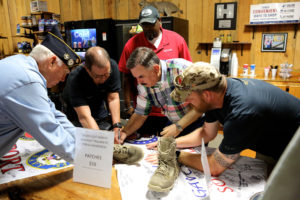 This issue highlights a growing concern Meyer feels. He is one who loves this country and has had a chance, through the “Never Quit March” to connect with other veterans who feel the same way.

With over a decade of near constant conflict, according to Meyer, the country can’t ignore this problem. “It is an issue that needs to be taken step by step through all the changing weathers of whatever political climate we may find ourselves in. Those 22 who die every day were 22 heartbeats, 22 souls, 22 lives that believed in the values this country showed them. There is no way this should happen in America. We are better than this and bigger than that.” 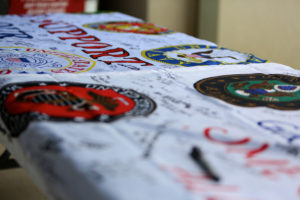 With every step of the way, Meyer gained momentum and support from other veterans and everyday Americans who gather strength through his struggle. “The support along the way has been nothing short of outstanding,” continued Meyer. It really has taken on a life of its own. But it just goes to show what we can do together.”

The 628 Mile Never Quit March for Post-Traumatic Stress Awareness began April 16, 2016 at the Conroe VFW Post 4709 and ended at Crystal Beach in time for Texas Frog Fest 2016 on May 28, 2016. All proceeds from fundraising will be donated to the Lone Survivor Foundation to help their mission to restore, empower, and renew hope for our wounded service members.