Gotta Get Away? Henry Ford Museum 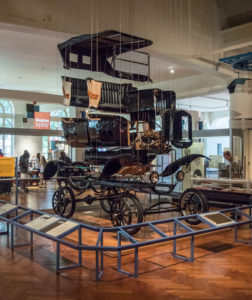 Take a trip into the past…where a train, whistling and smoking, roars through the village, passing a Model T Ford that is stopped at the railroad tracks. The train’s passengers look at the Model T in wonder, but then are distracted by the historic homes along their path—homes owned by George Washington Carver, Noah Webster, Robert Frost—not to mention a large replica of Independence Hall. All of these and more are found in Dearborn, Michigan, home to the Henry Ford Museum and Greenfield Village.

Upon crossing the entrance, a replica of Independence Hall, cars, and other artifacts from the automotive industry are highlighted—not surprisingly, given Ford’s pioneering efforts with the automobile. Hundreds of cars, from the most primitive to the most modern, are on display in the 160,000+ square-foot museum. Although there are a dozen standouts to catch your eye, make sure you see Quadricycle, the first of Henry Ford’s automobiles. 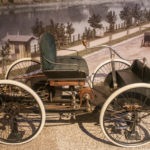 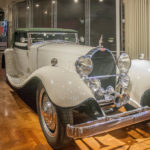 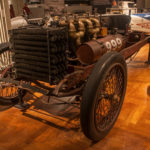 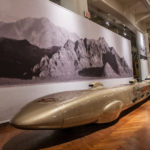 The Goldenrod set the land-speed record in 1965, traveling 409 miles per hour

Still hungry for more impressive cars? Check out the variety of racing and luxury vehicles, such as the colossal Bugatti Type 41 and the Ford 999. The record-setting 999 reached a top speed of 91 mph in 1904, setting the land-speed record of the time. The prized relic now stands as a testament to the need for speed of these early car manufacturers. This same need still persists in modern times and is embodied by the Goldenrod, the 1965 rocket car which held the land-speed record of 409 mph for 26 years.

But not all of the cars are speed machines. You can see the automobile that Henry Ford gave to naturalist John Burroughs, one of many versions of the famous Model Ts on display. There’s even a 1950s-era “safety car,” with rear-facing seats, wrap-around bumpers, and other safety features that were ahead of their time. 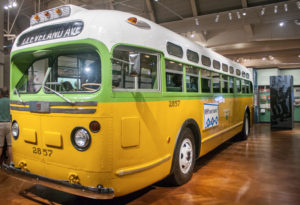 The Museum’s most famous vehicle, however, is a bus. The bus was a 1948 model, but it didn’t make history until 1955, when Rosa Parks stood her ground by keeping her seat. That bus is located in the civil rights section of the Museum, and visitors can board the bus and even sit in the same seat as this civil rights pioneer. 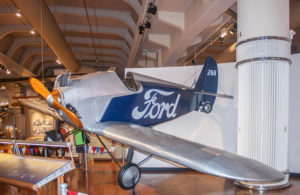 Pioneers of the Sky

Henry Ford had a particular admiration for the Wright Brothers, and the Museum’s contents reflect his admiration. Near the center of the Museum is a replica of The Wright Flyer, the first plane to make a powered flight. The Museum also houses items from the Wright Brothers’ bicycle shop; a lab for children to create paper airplanes; an exhibit on barnstormers; and a “Ford Flivver,” which the Ford Company hoped would be as successful in the air as the Model T was on the road. 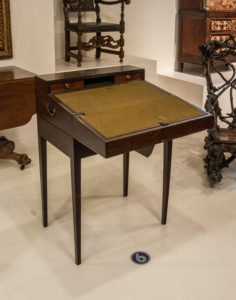 Perhaps the most interesting aspect of the Museum, however, is the ability to roam the massive Museum to find the unexpected. While Ford is most known for his technological innovation, the Museum is a monument to the American Experience as much as it is to the spirit of innovation. For example, there is a section on furniture, which not only highlights the work of Charles and Ray Eames, but also houses Edgar Allan Poe’s writing desk, a table of Mark Twain’s, and a rocking chair—made of roots—once owned by Cornelius Vanderbilt.

In the further realm of the unexpected, there are the Presidential Limousines used by Franklin Roosevelt, Dwight Eisenhower, Ronald Reagan, and John F. Kennedy. The latter vehicle is the actual limousine in which he was assassinated. It was used for 11 years after his death by Johnson, Nixon, and Ford, before being retired. 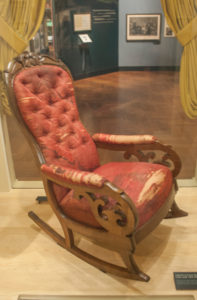 Abraham Lincoln’s Chair from Ford Theater. He was assassinated in this chair in 1865.

But the most disturbing artifact is the chair in which Abraham Lincoln was assassinated. It sits alone in a display case with blood stains still visible. Nearby are life casts of Lincoln’s face and hand.

Of course, not all the exhibits are associated with the rich, powerful, and famous. Exhibits on timepieces, dollhouses, railroads, firearms, telephones, coverlets, and even violins ensure that there are artifacts for everyone to enjoy a visit to the Museum. 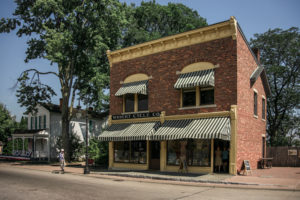 With almost 100 acres, there is a lot to cover, and the curators have divided the Village into thematic sections: (1) Working Farms; (2) Liberty Craftworks, (3) Railroad Junction; (4) Henry Ford’s Model T; (5) Main Street; (6) Edison at Work; and (7) Porches and Parlors. Visitors can hop on and off at the various stations, according to their interests. 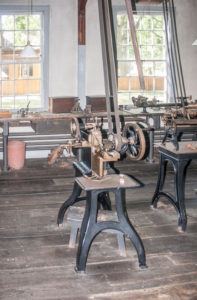 The “Edison-at-Work” area, for example, contains a replica of Edison’s Menlo Park lab. Because the original lab burned in 1914, Ford couldn’t bring the authentic artifact to Dearborn, but he did bring in two dump trucks full of dirt from the original site to add to the site’s authenticity.

The “Porches-and-Parlors” section is another area devoted to historic structures. There’s the home of poet Robert Frost; the George Washington Carver cabin; and the slave quarters from President Jackson’s “Hermitage.” Curiously, a house from the hometown of Stephen Foster was imported, and reenactors gather on the porch daily to sing early American favorites such as Oh! Susannah and Camptown Races. All of these structures were taken brick by brick and shingle-by-shingle from their original sites and restored at Greenfield Village. 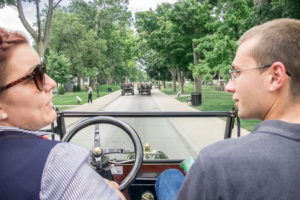 Paul Oliver rides in a Model T in Greenfield Village

Another way to tour the grounds is in an original Model T Ford—some of which have been driven more than 1 million miles—which can take visitors through 300 years of American history. During the drive, you might pass old-time bicycles, the aforementioned musical reenactors, or farmers, while also getting an auditory lesson on how to drive the classic car.

When the Model T ride is over, you can visit Greenfield Village’s Main Street, a chance to experience turn-of-the-century shopping. Visit the Village’s tintype, where Thomas Edison, Joe Louis and Walt Disney had their portraits made; or the Logan County Courthouse, where Abraham Lincoln tried court cases in the 1840s; or the Scotch School Settlement, where Henry Ford attended school; or the Wright Brothers Cycle Shop, where the Wright Brothers developed their skills as machinists. 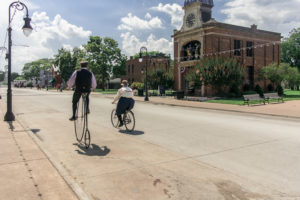 For those who want genuine hands-on experiences, the Liberty Craftworks District offers a sawmill, weaving shop, gristmill, silk mill, machine shop, glass-making studio, candle factory, and pottery studio. Demonstrations are available throughout the day and, for a fee, visitors can try their hand at their own artisan creation. Want a glass flower? Make your own at the glass studio. Need a candle-holder? Operate a 1917 lathe to create your own. Feeling lazy? Visit some of the many gift shops that sell the products created by the Museum’s staff artisans. 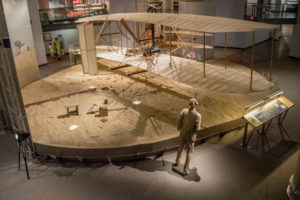 Greenfield Village offers seasonal activities, and The Henry Ford Museum offers special exhibits. Last summer, the Museum offered a Beatles exhibit, and they are currently offering an exhibit on the history of glass making. Of course the regular collections—totaling more than 26 million artifacts—are enough to keep you busy. So if you have a free weekend—or, more like a free week—this is the only place in the world where you can relive American history on a steam-powered train, in a Model T, or on your own two feet.

The Henry Ford Museum and Greenfield Village are located in Dearborn, Michigan, a suburb of Detroit. It is the largest indoor-outdoor museum complex in the United States and is visited by 1.6 million people each year. The museum began as Henry Ford’s personal collection of historic objects, which he began collecting as far back as 1906. Ford said of the museum, “I am collecting the history of our people as written into things their hands made and used…. When we are through, we shall have reproduced American life as lived, and that, I think, is the best way of preserving at least a part of our history and tradition…”