Trending
You are at:Home»Features»Get Away»Gotta Get Away? Eureka! Springs, That Is!
By Mike Yawn on April 28, 2018 Get Away 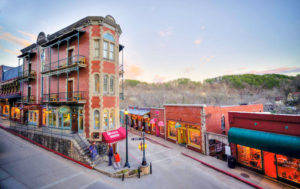 Story and Photos By Mike Yawn

Few destinations are as aptly named as Eureka Springs, Arkansas. Even for the frequent traveler, it is a discovery—and it does, in fact, offer springs aplenty. The springs are still an attraction, but the discovery derives from the area’s many other attractions—fantastic architecture, eclectic shops, myriad outdoor activities, and great restaurants—making it an ideal vacation location for those who need to get away.

While it might be a great get-away destination today, it was once a go-to city. It was incorporated in 1880, shortly after Judge L. B. Saunders claimed the town’s healing waters cured him of a crippling disease. In an age prior to the widespread scientific practice of medicine, a claim of “healing waters” was good enough to draw people. Both the ill and the healthy arrived in Eureka Springs, and a town, nestled in the southern Ozarks, sprang up. 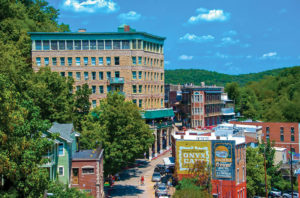 Elegant Victorian homes were built, hotels followed, then a railroad, and even a brothel. Within a decade, it was Arkansas’ second largest city, behind only Little Rock.

But, as the effectiveness of modern medicine called into question the curative powers of spring water, growth slowed, then stalled. The infrastructure and architecture were solidly in place but, by 1920, the heyday was over.

Unlike other former boom towns, however, Eureka Springs was aided by its beautiful geography, guided by sensible preservation policies, and populated by friendly citizens, allowing it to maintain its infrastructure, architecture, and beauty. It became an Ozark Shangri-La, a throwback to another era.

Although its historic structures are preserved by local ordinances, its oral history is preserved by local historians, including Michelle McDonald, who served as our guide on a van tour, a fun and informative way to see the community. On the tour, visitors can learn about Carry A. Nation, the famous hatchet-carrying teetotaler, who lived in Eureka Springs in her later years. Her home, “Hatchet Hall,” still stands. According to town lore, she tormented bar owners relentlessly, breaking bottles and, occasionally, furniture. Local saloons began posting signs reading, “Serving Citizens of All Nations—Except Carry.” She collapsed in Eureka Springs in 1911, whispering “I have done what I could,” a phrase that served as her epitaph six months later, when she passed away. 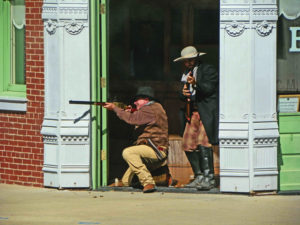 Moving from hatchets to bullets, the town still wears the scars from its only bank robbery, an ill-fated venture perpetrated in 1922. Bullet holes can still be seen in the exterior walls of the old bank building, but the bank was otherwise unharmed and no money was lost. The robbers did not fare so well. Three were killed and two were injured when locals took up guns, prompting the Arkansas Gazette to report: “We imagine it will be difficult to tell just who fired the fatal shot. Nevertheless, honor is due to all who participated in the shooting.” The robbery is reenacted each September and features locals who, according to one advertisement, “make this a fun, family adventure!” 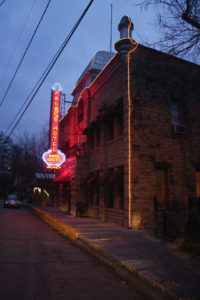 Also hearkening back to the early years of the twentieth century is the Palace Hotel and Bathhouse (PalaceHotelBathHouse.com). The hotel has been in operation since 1901, and continues to offer first-class lodging and “full-service spa appointments.” But the impressive structure, which is on the National Historic Registry, is perhaps more intriguing for its history as a bordello. Its red-light dealings ended in the 1920s, but its suggestive neon sign hearkens back to the hotel’s days as a house of ill-repute.

Although such past shenanigans, along with a thriving and independent artistic community, occasionally prompt locals to refer to Eureka Springs as “the hole in the Bible Belt,” there is a strong religious presence in the town. 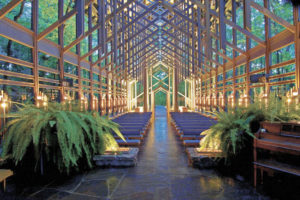 The downtown area is graced with several notable church buildings, including the First Baptist Church, the St. James Episcopal Church, and the St. Elizabeth Catholic Church, the latter of which is the only church in America whose bell tower serves as an entrance.

The crown jewel in the community’s religious architecture, however, is E. Fay Jones’ Thorncrown Chapel (ThornCrown.com). Constructed in 1980, the chapel has become one of the leading pieces of religious architecture in the world. In fact, in a recent poll of leading architects, it was listed as the fourth greatest architectural design—religious or otherwise—of the twentieth century in the United States.

The structure is forty-eight feet tall, approximately the height of the surrounding trees, a match that enhances its integration with nature. This integration is further complemented by its component parts, which are largely organic. The floor is native flagstone, the support beams are pine, and the walls are rock, giving it, as its website suggests, “the feeling that the chapel is part of its Ozark hillside.” It is most notable, however, for its 425 windows, which constitute some 6,000 square feet of glass, giving it the feel of an open-air cathedral. It is an operating chapel, with worship services and weddings, but it is open to visitors March through December who wish to admire its architecture, wander through the sylvan setting, or simply enjoy a moment of prayer.

More conspicuous than the Thorncrown Chapel is the Christ of the Ozarks, a massive sixty-foot structure on the outside of the historic district. Constructed by Emmet Sullivan, the sculpture stands on a twenty-three acre compound, which also includes a Bible Museum featuring more than 6,000 Bibles; a section of the Berlin Wall; and an amphitheater where “The Passion Play” is performed (GreatPassionPlay.org). The play has attracted some eight million visitors since 1968, making it perhaps the most attended outdoor play of the past half-century.

The shops trend toward the tourist and the trendy, with specialty shops filling spaces occupied long ago by service providers. The much-photographed Flatiron Building is home to retail shops; the erstwhile Citizens Bank building is now a stopping point for souvenir-seeking tourists; and the old Roxy Theater has been transformed to one of the community’s many antique shops, albeit the only one with a ticket window. Beyond these attractions, the downtown area offers numerous clothing, jewelry, gift shops and, with more than 200 artists living in the community, some 20 art galleries.

For those more in tune with the culinary arts, Eureka Springs also offers something for every palate. Mud St. Café has wonderful offerings, ranging from breakfast grits and pancakes, to lunches that include salads (try the hummus salad!), hot croissant sandwiches, and great soup and coffee options.  There is an annex down the street that features a view of an underground creek as you dine. For dinner, the Local Flavor Café is more upscale than the name suggests, and offers a rich appetizer menu (please try the baked brie) along with enticing chicken, steak, pork, seafood, and pasta entrees.  Other recommended restaurants include Ermilio’s and the Crystal Dining Room (formerly the 1886 Steakhouse), the latter located in the historic Crescent Hotel. 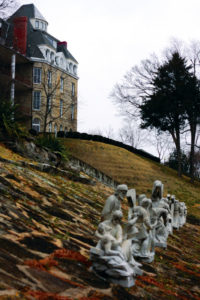 And while the Crescent Hotel (crescent-hotel.com), with its cat Jas-purr, makes for an inviting place to stay, visitors may also opt for the Basin Street Hotel, or the aforementioned Palace Hotel, all of which offer magnificent views and the full gamut of hotel services. For those interested in smaller-scale settings, Eureka Springs offers a bevy of bed and breakfast options, including many which began their lodging lives as old-school motor courts but, through the miracle of renovation, have become quaint cottages in the heart of the historic downtown.

With so many interesting places to stay amidst such a beautiful setting, it is little surprise that Eureka Springs has become the “Wedding Capital of the South,” as well as a much-sought honeymoon destination. For those seeking efficiency (“no blood work, no witnesses, no waiting”), there are appropriate venues, while the aforementioned Crescent Hotel or Thorncrown Chapel (and many others) are suitable for more elaborate ceremonies. 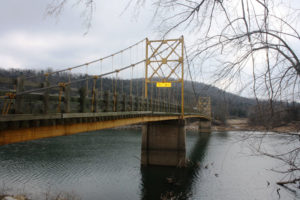 Lovers of the outdoors shouldn’t be fooled by the many shops, wedding chapels, and dining options; Eureka Springs also offers many recreational activities. Ozark Mountain Ziplines (ZiplineEurekaSprings.com) allows visitors to experience their inner adventurer, spelunkers can enjoy the four nearby caverns that are open to the public, and golfers have their choice of three courses within thirty-five miles. With three lakes and three rivers, Eureka Springs also offers much in the way of camping, hiking, scuba diving, fishing, and boating, including a twelve-mile cruise on the Belle of the Ozarks (estc.net/belle). The lakes also offer beautiful views, including the photogenic “Beaver Bridge,” often called the “little Golden Gate” of Arkansas. 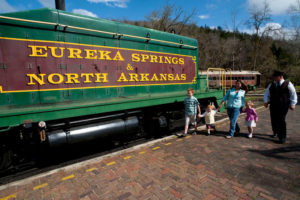 For those who prefer a retro exploration of outdoors, the ES & NA Railway (esnaRailway.com) offers a four and a half mile ride through the Ozarks, and passengers can even try the “Eurekan Dining Car” if they prefer their view with a meal.

Today, the springs still flow, just as they did when the town was founded during the Victorian period. There are more than sixty live springs in the area, and the city has preserved many of the downtown springs as park space, enhanced their beauty with artful landscaping, and accentuated their individual features. The sprawling Basin Spring is set amidst an Amphitheater; Grotto Spring is accessed through a city-built cavern; and Sweet Spring is most beautiful from above, viewed from an elevated city hiking trail.

Almost all the downtown springs are surrounded by the community’s beautiful Victorian architecture, the dominant style in the downtown’s two-square mile historic district. Painted ladies liven the landscape, cupolas adorn many a home, and local codes still require even new home builders to construct detached garages in the spirit of turn-of-the century carriage homes.

The carriage-home style is just as well, because it’s not a town made for the automobile. Some homes lack any sort of garage, carriage-style or otherwise; the owners sometimes park across the street or in a nearby niche. The roads, too, lack modern-day accompaniments such as traffic lights, multiple lanes, or, for the most part, traffic signs. But these idiosyncrasies simply enhance the Victorian era ambience, and traffic flow proceeds just fine.

“Eureka Springs, as a town,” noted Madeline Bridges in 1903, “is so deliciously irregular, its odd little passages and winding roads, its crooked streets, its steep ascents, or descents—tempt you on and on…” It is much the same today, with the roads tempting you on and on, leading you to discover great shopping and dining, beautiful architecture, and wonderful outdoor adventures.