The General Sam Houston Folk Festival has become an East Texas classic, a tradition stretching back more than a quarter of a century.  The Festival celebrates the life and times of General Houston and has endured and thrived—much as the General himself did—by leaning on a public-spirited army of volunteers.

This year, the army is at it again, hosting the Folk Festival from May 2-4 on the 18-acre grounds of the Sam Houston Memorial Museum.  And for the 27th time in 27 years, the grounds will transform from a peaceful, sylvan setting into a bustling frontier settlement where families can spend a day watching historical reenactments, shop for crafts, wares and food, or simply stroll the same grounds—and tour many of the same buildings—once occupied by Texas’ most famous citizen.

Unfortunately, the Texas governor wasn’t. Armed with the line-item veto, Governor Bill Clements cut the Museum’s funding, leaving it, according to The Dallas Morning News, “doomed.”

Perhaps Houston would have appreciated the reversal of fortune. His favorite books, works by Homer and Virgil, addressed fate’s alternate cruelty and kindness, and he experienced such reversals in his own life—as when he had been nearly killed on the battlefield; or when he was nearly ruined by an ill-advised marriage and subsequent scandal; or yet again when he lost the Texas governor’s race in 1857; and finally, when he was forced from office in 1861 after refusing to endorse the Confederacy. But Houston was nothing if not resilient—a quality that apparently left a lasting impression on the citizens of Huntsville.

Showing their resilience, Huntsville citizens went to work.  An “army” was mobilized, with officers, enlistees, and a mission to save the Museum—and, by extension, to protect the legacy of Sam Houston.  “We’re taking the task at hand,” noted Bob Hardy in 1987, “and the museum is going to be open.”

Hardy was the “Adjutant General” in that army.  Dean Lewis was the “Secretary of War;” Rip Byrd was “Public Affairs General;” Cecil Neely was the “Commissary General;” J. J. Head was “Inspector General;” and hundreds of local citizens marched as foot soldiers, and even paid a membership fee to do so, all in the effort to save the Museum. “Light is the task,” said Homer, “where many share the toil.”

The collective effort was a success. There was a parade, a public relations drive, and (fatefully) the launch of the East Texas Folk Festival in 1988. “It was well produced that first year,” noted Scotty Cherryholmes, who participated in the inaugural effort. “The volunteer base was huge.  Everyone from the mayor down to all the local organizations participated.  We were concerned that we were going to lose that Museum, and it got people involved.”

The funds from the Army membership and the Folk Festival brought in more than $50,000, which motivated the University to search for other sources of savings and income.  The Folk Festival was born, and the Museum was open. Two years later, the Texas Legislature restored funding to the Museum, providing it with operational funds and a popular festival.  “Fortune,” noted Virgil, “favors the bold.”

The spirit of the old “East Texas” Folk Festival remains, even as the event has evolved and grown.  The name changed through common usage to the “General Sam Houston Folk Festival” in the early 1990s.  In marketing terms, the change reinforced “the brand,” but it also emphasized the local community and its history, which is ineluctably tied to Sam Houston. “Houston’s significance,” observed Mac Woodward, the Director of the Sam Houston Memorial Museum and Huntsville’s Mayor, “as a military leader, a politician, a husband, and a father is what we want to highlight and celebrate.”

“The big change from 1988,” noted Cherryholmes, “was the decision to bring the event onto the grounds where Sam Houston lived.  The grounds are a shrine, and they have been restored beautifully.  It’s like a 19th century village.”

These changes have enriched the event without changing its spirit, a spirit further reinforced by popular events performed annually.  “We have a performance cast,” remarked Mary Allen-Keating, a performer and singer who is on the Festival Board. “They will be playing all sorts of characters, such as Nancy Houston [Houston’s daughter] and Deaf Smith [one of Houston’s military scouts].  Also, Scott Griffin, who played Sam Houston in Denton Florian’s documentary, will be performing a few vignettes from Houston’s life.  In all, we have about a dozen performers.”

Another mainstay of the Festival is the spotlight on the cultures that helped settle and develop Texas.  These programs, according to Woodward, deserve a special emphasis: “Many cultures were important during this formative period in Texas history—Sam Houston’s time.  Native-American culture, Hispanic culture, African-American culture, and others were important in early Texas, and those will be on display.”

Also popular are the reenactments and the demonstrations.  The Cane Island Volunteers—who performed at the inaugural Festival—will be returning.  There will be cannon and rifle fire, Dutch-oven cooking, blacksmithing, glass-blowing, and individual re-enactors who will demonstrate their own specialty, from woodworking to cross-stitching.

With all this history on hand, there are lots of learning opportunities, even for those who have attended before.  Visitors may have watched the firearm demonstration, for example, without realizing that it was a similar firearm that gave birth to the phrase, “a flash in the pan”—used when gunpowder in the priming pan sparked but failed to fire the bullet.  Or visitors may have been to the Woodland Home, but not realized that the dog-trot runs north-south, thereby catching the summer winds, which blew north and cooled the home and its inhabitants.  Or children may have been to the candle-making booth, without fully comprehending a life without electricity.  For the digital-native generation, it is difficult to imagine that an iPhone gives off more light than approximately five candles, which once brightened a pioneer family’s home.  Such meager light shaped pioneers’ work habits, mealtimes, and sleep patterns, while giving birth to admonitions such as that offered by Benjamin Franklin: “Fine linen, gold and girls so bright, choose not to take by candlelight.”

Something Special—For Locals and Tourists

In good years, the Sam Houston Folk Festival draws some 15,000 people, making it one of the most popular attractions in the community. Since its inception, more than a quarter million people have strolled the grounds once bestrode by Sam Houston.  Fortune has smiled on the Museum since the doom foretold by The Dallas Morning News.  But neither its popularity nor fortune’s glow fully capture the Festival’s importance, which derives most directly from its celebration of Sam Houston and of the community in which he lived.

“This is a special place and a special event,” concluded Keating.  “We believe it offers something that no one else can boast—the place where Sam Houston lived and the home in which he died—and this Festival, with its army of volunteers, is carrying on his legacy.” 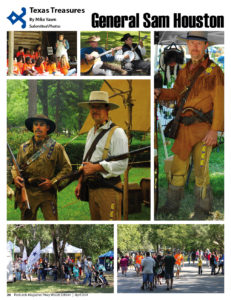 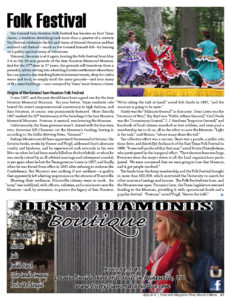 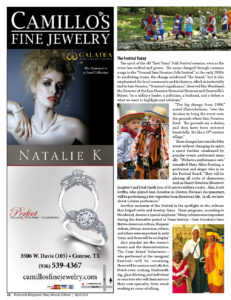 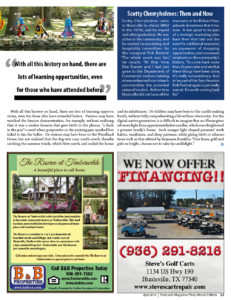 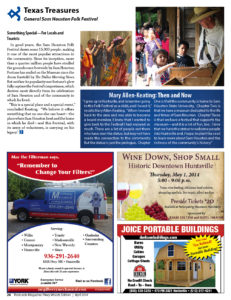 Tags:
Previous Article
April 2014 PW
Next Article
Does it cost anything to submit my photos?

Does it cost anything to submit my photos?
Postcards Magazine April 22, 2014