Do You Know? Winston Rosenbaum 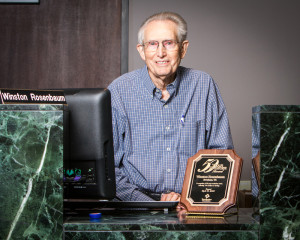 When we called Winston Rosenbaum to schedule an appointment for this interview, he told us he would rather meet at his home—He didn’t want to use banking hours for personal business. It’s that kind of personal, honest work ethic that has led him through five successful decades at Brenham National Bank.

After getting a few photos of Rosenbaum in his work setting, we honored his wishes by visiting with him and his wife Tanya at their home on 60-plus acres near Burton. There, amid a panoramic view of gently rolling hills, it became quite clear that he loves the simple nine-to-five pleasures of working in a small town, and the quiet evenings of a peaceful, country life.

Congratulations on 50 years service to Brenham National Bank! What did you do to celebrate the occasion?

In April, the bank held a reception, and I had lots of old friends, family, and customers show up to help us celebrate the event. Also, I received the 50-year Banker Award by the Texas Bankers Foundation at their 131st Annual Convention, which was held in Austin. So, it was really nice. 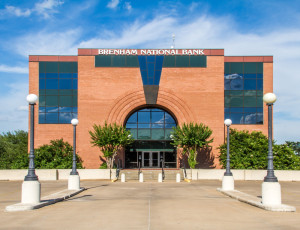 Was the job at Brenham National Bank your first job?

No, I worked for J.C. Penney for five years. Then, when I was 27, I went to work for Brenham National Bank. I started there in 1965, when it was Farmer’s National Bank; the name changed in 1975. It was small, with no drive-in. It was different from working at Penney, where I was more of a salesperson. In retail, you’d go up and greet the customers and ask if you could help them, but then when I got to the bank, people came to you with their business.

Did you ever think about changing jobs during those many years?

I’ve been happy, so not really. Oh, I guess there were some times I thought about changing jobs, but then I wondered what else I would like to do. What I had was working just fine, so I never left. I started as a bookkeeper, did some posting for accounts, mainly running errands, then I became a teller about five years after starting. 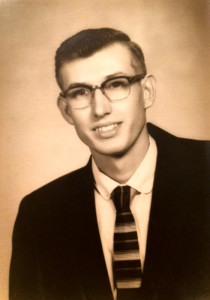 What are some of the most difficult banking days you can remember?

I guess the hardest financial time for this area was in the ’80s. We had the oil boom, and then everything—401(k)s, investments—took a nosedive. Our customers were very concerned, because interest rates on CDs were good for a while, and then it all dropped. Today, people are still concerned because of rates.

What’s the biggest change you’ve seen in the banking world?

Computers! That had to be the biggest change. In the beginning, we just had an adding machine, and we did everything by hand. Gradually, we got a teller machine that helped us balance, but then when we got the computers, there were big changes. It was hard at first, but with practice, we all caught on.

What has been the most important, rewarding part of working at the same bank for all those years?

I think it was developing relationships with customers. It was the employees, too, but you start getting to know your customers, especially in a small bank. You have the same people coming in all the time. It’s customer service that matters. ATMs have changed some of that, but I’ve gotten to know so many customers who are older now, and they still come inside the bank. They become your friends. Everywhere I go, I know people because of my relationship with the customers. 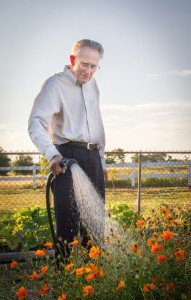 In your opinion, where will banking be in another 50 years?

I hate to see it all becoming automated, but I think it’s going to come to that. Tellers won’t be needed; people will get their money from machines. The younger customers are beginning to use the ATMs.

I’m guessing you’ve witnessed a lot of growth in Brenham through the years. Tell us about that.

Yes, I have! When I started at the bank downtown, that part of town was Brenham. Everything was downtown, located on two “main” streets—grocery stores, banks, everything. It was all local, family businesses. Tanya and I remember when Barnhill’s Drug Store and Perry Brothers were the only air-conditioned stores in town. Then it all changed. It started with the Four Corners Shopping Center. Before then, downtown was quiet, but now it’s busy again! 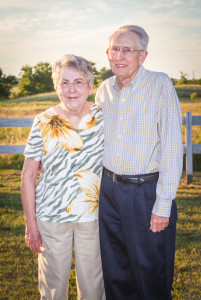 Can you tell us something your customers may not know about your banking years?

That’s how I met my wife! Tanya started working at the bank as a bookkeeper one year before me in ’64, and she trained me. We dated awhile, then got married a couple years after I started there. She worked there until 1974, when our daughter Karen was born. We’ve been married 47 years now, and we’ve been in this same house since 1973.

Are you originally from the Washington County area?

I was born here and lived a few miles down the road. When I was about four years-old, my parents moved to this property. This land is the Rosenbaum home place, and the house up the hill is where I grew up. It has been in our family for four generations. My father was a farmer, and my mother was a homemaker. Later on, he managed the Simon Theater. I picked cotton; we had corn; we raised cattle, hogs and chickens—we worked hard from early in the morning until the evening.

Where did you go to school?

I went to school at Hoddeville for grades one through six, then to Harrisburg School for two years, then to Brenham High School. At the time, the high school was where Brenham Community Education Center is now. When I got off the bus, I’d put my books on the table and my grandfather, Henry, would have the Farmall tractor ready. I’d have to plow the fields. It was a simple farm life.

When it came time to go to college, I went to Blinn. I raised about a hundred turkeys and sold them to the M-G Feed Company in Longpoint to help pay the tuition.

Winston and Tanya hold on to memories in well-preserved and organized albums. We spent some nostalgic time going through old photographs and memorabilia. Rosenbaum shows me his report card from the first grade. Even then, he had a flair for numbers, making As and Bs in arithmetic—which came in handy for his banking years. Then I was shown a vintage hospital invoice for $19.85. 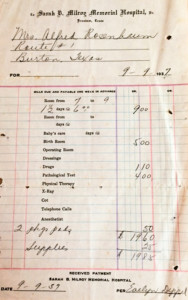 (Laughs) We were going through some photos and found my parents’ bill from Sarah B. Milroy Hospital when I was born. Evelyn Dippel signed the invoice, and I’ve worked for her son, Tieman “Skipper” Dippel, Jr., at the bank for all these years. His father, Tieman Dippel, was president of the bank when I started working there. And now I work with Tee Dippel, who is the President and CEO of the bank. I guess you could say I’ve been with the Dippel family for my whole life.

Your roots run very deep in this community. How else do you dedicate your time to this region?

What do you enjoy doing during your free time? 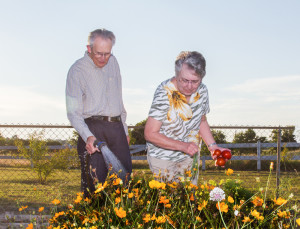 Aside from personal satisfaction, have you gained any recognition for your commitment to our community?

What are your plans for the future?

I’m going to go part-time in August, but I’m not ready to quit.

… And when you do retire?

I plan to garden, read, and keep up with the Astros! Also, we will be able to enjoy our grandchildren, Abby and Ella, who live in Dallas. We’ll get to travel to spend time with the girls and Karen and her husband, Dave Bunger. Ella was born on my birthday!

You and Tanya seem very happy. What is your key to living a good life?

Being with family. And, of course, having a strong faith in God.

Rosenbaum’s “Words of Wisdom Acquired From 50 Years In Banking.” This quote is on his Texas Bankers Foundation commemorative plaque:

“Start your day with a positive attitude, and try and do God’s will always.” Winston Rosenbaum