Do You Know? Steve Jeter 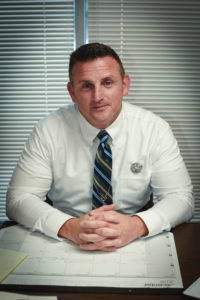 Being a Texas Ranger is more than a full-time job, but Steven Jeter has found time to fulfill his law-enforcement responsibilities while also moonlighting as an adjunct professor (in Kinesiology) at Sam Houston State University and being involved in the local community.

When did you first become interested in law enforcement?

I would say as far back as a young kid. My family and I were traveling out of state when we broke down. A local highway patrolman in Missouri pulled over and helped us. He loaded all of us up in his car, and I got to sit up front. I was fascinated by the dashboard with the radar and other gadgets. I think that is where I first got the bug.

How did your career as a Texas state trooper begin?

I played football at SHSU while I was earning my Bachelor’s Degree in Kinesiology. I then earned my Master’s and became a coach at SHSU, but I wanted more of a challenge. Some of my buddies brought up working with the Highway Patrol, and the more I thought about it, the more it sounded like a good job for me, particularly in light of my childhood interest in law enforcement.

Tell us a little more about your football career at SHSU.

I played defense and special teams from 1988 to 1993. I was part of the 1991 Southland Conference co-championship team.

What’s your favorite memory from when you attended Sam Houston State?

My favorite memory is a football memory. We were playing at Southwest Texas (now Texas State) and they came out to the song, Welcome to the Jungle, but we beat them at their house. That victory meant a lot to us, and it meant a lot to the team that year—ultimately catapulting us to the playoffs.

You are still involved in various ways with the Bearkat football team.

I try to stay part of that. I donate money from time to time, and I attend most of the games. I provide security for a lot of the games. I’m still trying to figure out what I want to do when I grow up, and I may try to get back into coaching when I retire. I’ve been an adjunct professor at SHSU for the last 15 or 16 years, and I enjoy teaching. So, SHSU is still a big part of my life. 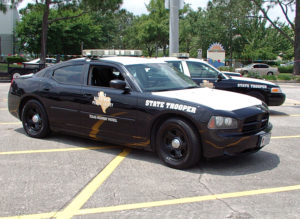 So you went from coaching at SHSU to a career with the Highway Patrol. How did your career as a Texas Ranger begin?

Again, I was just looking for a challenge. When I was hired by the Highway Patrol, I had mentors that helped me look to the future. I wanted a more active role in pursuing “the bad guys,” and becoming a Texas Ranger was a product of that desire.

Has being a Texas Ranger satisfied your need for a challenge?

Yes, without a doubt! I’ve been a Ranger for nine years; I was in highway patrol for a little over ten, so I’m coming up on my 20-year anniversary. There is a lot of tradition in being a Ranger, and I look forward to coming to work each day I wake up. Sometimes the hours are long, but it’s important to fight through that until you achieve success. 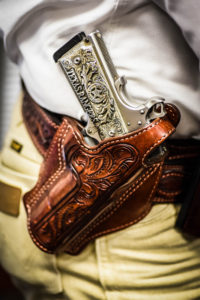 You have worked some high-profile cases, for example, the shootings at Fort Hood. Can you tell us about one of your most interesting cases?

There was a case in 2010, when Jurwoody Moler killed a local high school student, K’Lynn Sherrie Kohr. It was a classic “whodunit,” and with the Huntsville Police Department, we were able to find the killer. He had fled the area, but we tracked him to Iowa, where the state police helped get him into custody. Of course, catching the killer doesn’t change the fact that a person died needlessly, but I hope that it helps the community and helps the family heal.

Jurwoody Moler was returned to Huntsville by Ranger Jeter and HPD Officer Eric Scott. He was found guilty of murder in 2011 and was sentenced to life in prison.

More recently, we worked on a crime that hasn’t yet been adjudicated. A local woman was murdered by a husband and wife. Unfortunately, I cannot give a lot of details on that case, but I’m proud of the work that we, in collaboration with local law enforcement officials, did to make an arrest. 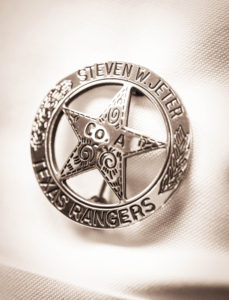 What characteristics does an officer need to handle high-pressure situations?

You’ve got to be a man or woman with integrity. If you don’t have that, we don’t need you. That’s in law enforcement, period. Ideally, what we are looking for in the Department of Public Safety and the Rangers, is for folks who can work unsupervised. We are expected to do our job and do it right the first time. We’re looking for someone that is the same person, hopefully a good person, on duty as they are off duty. We are looking for somebody that the citizens of Texas can be proud of.

The Texas Rangers have a historic legacy. What are some of the traditions that are still alive today?

We’ve worn the same badge for more than 200 years, and I am wearing it today. They are punched out of a silver Mexican peso. If you look at the back, you can still see the peso marks. The way I dress is a tradition. We wear our boots, hat, leatherwear, high-tie tack; it’s western business wear. You can google Rangers from a hundred years ago, and they will be dressed like I am today. The gun I carry is a .45. Back in the 1800s, the Rangers helped Samuel Colt develop this gun. The Colt changed the way that the U.S. military forces fought the Indians. The Comanche could fire off 10-12 arrows before a soldier could reload. The six-shot Colt changed the face of Texas.

It was Ranger Samuel H. Walker who collaborated with Samuel Colt on the six-shooter. Although “Walker County” was originally designated and named in 1846 for Robert Walker (a Mississippian who served in the Polk cabinet when Texas was annexed), the Texas Legislature changed the designated honoree to Samuel Walker in 1863. 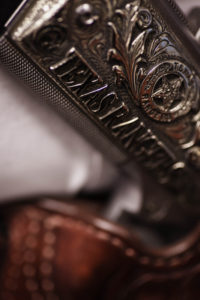 What are some of the biggest misconceptions that people have about Texas State Troopers and Texas Rangers?

I would say this about law enforcement in general—people forget that we’ve got hearts; we’ve got families. People aren’t excited to see a trooper in their rearview mirror; a lot of people think that law enforcement don’t care and it’s all business. Part of that is because of our training. The average person does not understand that it is a safety issue. We’ve had around 65 on-duty law enforcement deaths this year, which is about average. But we’ve also had 23 law-enforcement officers across the country assassinated—not killed doing their job, but assassinated because of their job. Law-enforcement officers are targets for some people, and that is one of the scariest things for the modern police officer.

What advice would you give to young people who are interested in law-enforcement careers?

The decisions you make today—good or bad—can impact you for the rest of your life. I understand what it’s like to be young. I understand wanting to have a good time, but keep it legal. If you apply to work for DPS, you are going to have to take a polygraph. They will ask about prior drug use and criminal activity. If you want to go into law enforcement, you have to stay focused. If you hang out with the wrong people or do the wrong thing, it may limit your career options. We’re held to a higher standard, as we should be. 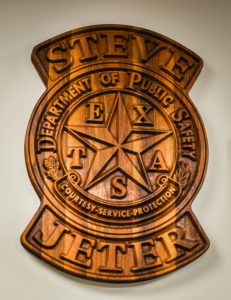 How does your family feel about you being a Texas Ranger?

They are ecstatic, but that wasn’t always the case. It was a little different when I told them I was going to go to Trooper School. My mom and wife cried, which is understandable when you look at that from a loved one’s perspective and how dangerous the job can be. But I began working in law enforcement in 1997, and I said, “I will go where you send me, and I will do the job you need me to do.” I am willing to put my life on the line for people I have never met.

When I told my dad, he said, “Why? You can make much more money somewhere else.” He dropped it eventually, and then after about five years, he asked if he could ride with me. We had a blast! After that, he understood, and he never questioned me again.

What else would you like Postcards’ readers to know about you and your job?

It’s an honor to do this job, to be part of this division, and to serve the counties I serve.