Do You Know? Shirley Jackson 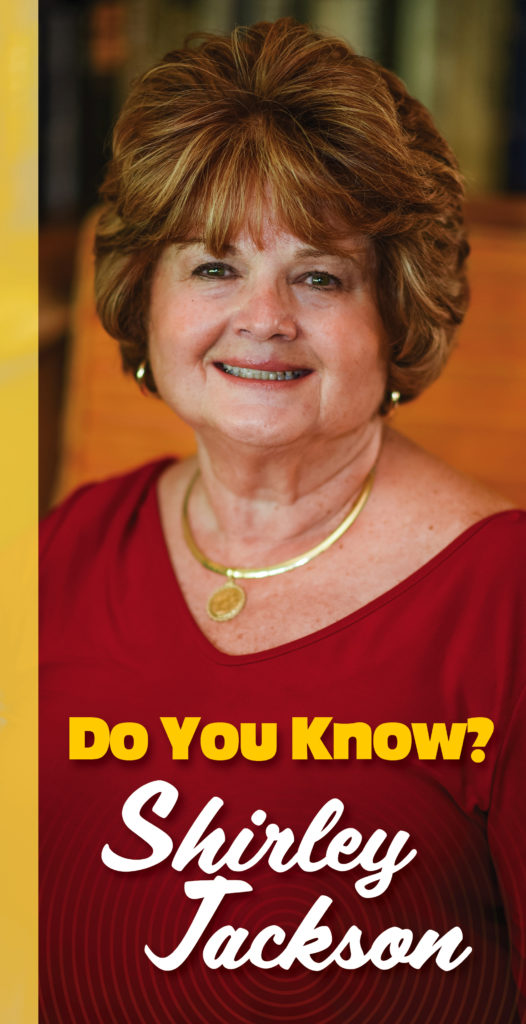 Dr. Shirley Jackson began college in 1959. She earned her final degree (an Ed.D.) in 2005. It is an impressive span, but one that is appropriate for a woman who has devoted her life to teaching and helping others. Although she didn’t move to Huntsville until the middle 1980s, she has had rewarding careers at Huntsville Independent School District and Sam Houston State University, while now enjoying an active life in retirement.

Tell us about your childhood.

I was born in Seattle, Washington, and I have a younger brother. My father’s parents were from Holland; my mother’s were from England. Both sets of grandparents were proud to be naturalized citizens, a pride they instilled in their children and grandchildren. We were a middle-class family, but I was the first in my extended family to have a college education.

What were your interests as a child?

I was always active and enjoyed youth activities in school and church. In high school, I served in a variety of elected class offices. I also belonged to the Junior Orthopedic Guild, which allowed me to do volunteer work at the Seattle Children’s Hospital. My father was a Master Mason, making me eligible to join Job’s Daughters, where I served as Honored Queen. After graduating from high school, I began night school at the University of Washington, and continued to work at Woolworths doing payroll for their 350 employees.

When did you decide you wanted to become a teacher?

That’s difficult. I can remember, “playing school” with my childhood friends, but I didn’t settle on that path immediately. I transferred from the University of Washington in Seattle to Washington State University in Pullman, where I met my future husband Jerry. In my sophomore year, he was graduating and being commissioned as a 2nd Lieutenant. He had orders for Germany and said, “If you marry me, I’ll take you to Germany.” That was 57 years ago, so I guess it worked out! But it interrupted my schooling, and we didn’t go to Germany—at least not right away. He ended up being sent to Killeen, Texas. We moved 16 times in the next 20 years! The Army sent him back to Washington State for his master’s degree, and I earned a bachelor’s degree in English with a history minor. After several more military assignments, including a three-year tour in Germany, we arrived at Fort Polk, Louisiana, where I taught high-school English. I also earned my Master’s in Education at Northwestern State University in Natchitoches. I have spent most of my life as a student. 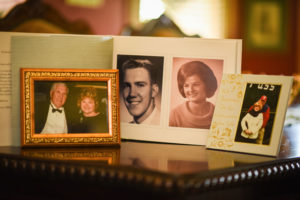 How did you get to Huntsville?

I was teaching in Louisiana, and the Army was thinking of moving us again. With our two daughters in high school, we really didn’t want to move again, nor did we want to be separated if Jerry was sent overseas, so he decided to retire from the Army. My principal offered him a job teaching in the history department, which he took. But when Jerry was offered a job with TDCJ in 1986 and I was offered a position teaching at HISD, we decided to move. It more than doubled our salaries.

What did you enjoy most about teaching?

So many things! My master’s was in Special Education, and my focus was the Gifted and Talented (GT) program. HHS Principal Ann Froelich hired Jay Clements (Coach Joe Clements’ oldest son) and I to write a secondary GT curriculum for English. Thus, in addition to my regular classes, I was able to teach the GT students in a two-hour block—allowing them to earn credits in Freshman English and World History. Using a college history text, we studied each historical period and then read related literature. For example, after understanding the specifics of the French Revolution we read Dickens’ A Tale of Two Cities. I absolutely loved what I was doing! 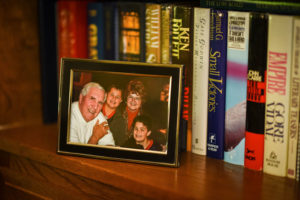 What do you think makes for an effective curriculum?

The best curriculum is one that challenges students and enables them to make choices. As a teacher, I tried to individualize student learning. The key is to let students choose, when possible, how they want to learn the material, demonstrate they had mastered it, and (hopefully) have fun in the process.

Do you remember any teaching experiences that, in retrospect, are funny?

For a final exam, I let the students bring a 3X5 note card to the test. They could put as much information as would fit on the note card. One student came in, and he had printed his information on paper from an adding machine, which he had accordion-folded (laughing) and glued it to his card. It was a 3×5 card, but he could unfold it to a very extensive document. It was hilarious. Another funny thing was during final group projects, which involved explaining or recreating an historical event. This particular group included football players, and they came to class wearing green hospital smocks, carrying a baby doll and stirrups. I asked, “What are you guys going to do?” And they said, “We are going to re-enact the birth of Queen Elizabeth. I responded, “No, that you are not.” I loved projects, because students are creative, and we could build off of each other.

What prompted you to retire from secondary education and strive for a doctoral degree?

When I retired from Huntsville High School, I wasn’t really ready to quit, but I wanted to continue learning, so I applied to SHSU’s Ed.D. program. After being accepted, I was hired as a doctoral fellow. After I graduated, I taught several classes on campus, at the Woodlands Center, and online before retiring again. Later, I was invited back to SHSU to work with Dean Genevieve Brown and Dr. Beverly Irby on several textbooks.

What’s a key to successful teaching?

You have to have a passion for your content and a love of learners. Being skilled in the delivery helps as well. Some of us are auditory learners, some are visual, and some are tactile kinesthetic. A successful teacher will teach to all three of these learning styles, allow students choices in the material, and in the way they are assessed.

I liked secondary education because I could deal with more mature topics, and the students could voice opinions. I also enjoyed the extra-curricular activities available in high school. In Louisiana, my students and I started a Humanities Club that traveled each year to the Renaissance Festival in Plantersville. I was able to take 30 students to London and Paris one year and to Germany and Austria the next.

In Huntsville, I was the student council sponsor. Every two years, the council would do a political convention, timed with the gubernatorial or presidential elections. Another project was to celebrate the 500th anniversary of Columbus’ voyage. The students really got involved and designed a replica of the Santa Maria. Working with the construction class and Larry Thornton, their teacher, the students actually built a life-size replica in a neighborhood playground.

With Janet and Frank Fair, I coached a Texaco Academic team that participated in two national championships—one at Rice University and one at Florida’s Disneyworld. Because secondary students are older, there are more opportunities to travel and otherwise expand their learning experiences. 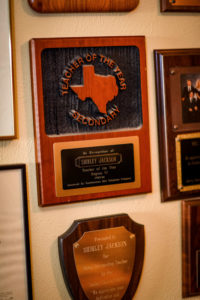 You’ve won a number of awards, including Region VI “Teacher of the Year” award and “Texas Excellence Award” from the University of Texas.

The students made me look good. I would toss an idea out, the students would develop it, and it would grow into something special. I asked them to work really hard, but I worked as hard as they did, and I think because I did, they didn’t mind working with me. They were willing participants, and without that, there wouldn’t be any awards. Also, I’d like to mention that Ann Froelich was a huge part of the success—she wasn’t afraid to take chances, and I think that is important in education and for teachers to grow.

What has occupied your time since your retirement from SHSU?

I have time for family and to get involved in community activities. For the past three years, I have been Chair of the Huntsville Education Foundation that was formed in 1994. The Foundation raises money used to support teacher grants for innovative and unique activities in their classrooms. This past May we awarded $25,000, which was divided among all the HISD schools. Since its inception, we’ve awarded almost $500,000. I continue to be interested in education, and I’d like to do more mentoring in “my next career.” I think it would be good for retired teachers to mentor young teachers, and I think this has the possibility of creating a successful partnership that provides support for the teacher as well as student achievement.

I enjoy reading, gardening, and cooking. We belong to a gourmet group that meets quarterly and is really a lot of fun. Jerry and I also have two teenage grandsons who live in Houston, and they keep us both busy as well. 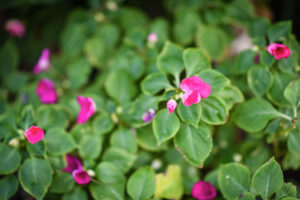 You are also involved in the Newcomers organization in the community.

Yes. When my mother was about 75, she moved to Huntsville. One of the first things she did was join Newcomers. She was active and continued to attend their luncheons until she passed away in 2005. I thought, “…how nice, they let her stay even after she was no longer a newcomer.” When we sold her home, the Spragues moved in; Gretchen invited me to Newcomers, and I said, “No, I am not eligible. I have lived here almost 25 years.” She said, “Don’t be ridiculous. That’s not how it works.” So I went, and the next year I was elected President! Newcomers is a social organization, but one that is very supportive of the Huntsville community.

You are also part of “POP”: Promoting Our Positives.

Yes, this was created by former Mayor Jane Monday and Director of the Chamber of Commerce Carol Smith. Its purpose is to support HISD while promoting everything good that Huntsville has to offer. The first thing they did was bring back the display of green hornet flags on Sam Houston Ave and around the downtown square before high-school football games. They do other things, such as providing real estate agencies with promotional cards listing all the positive things our community, HISD, and SHSU offer. POP collects clothing, books, and distributes gift cards to students needing financial help. POP also coordinates sponsorship of our district schools by our many community churches. Being involved reminds me that Huntsville is an extremely generous community. 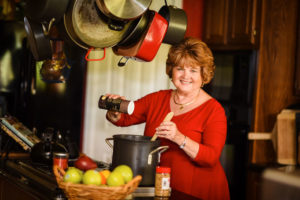 You mentioned your family. How are they doing?

Watching our children grow and create families of their own has been among my greatest blessings. My husband and girls have been my best supporters, allowing me the time, when I was teaching, to make a difference in the lives of my students. Now that both Jerry and I are retired, we do a lot of traveling—often arranging trips around our grandchildren’s many activities, so we can travel as a family. This summer, we all spent a week in England. It was especially wonderful for me to share British history with my grandsons who will soon be studying it in high school. Besides London, we traveled to Shakespeare’s home in Stratford-upon-Avon, Canterbury Cathedral, Winston Churchill’s birthplace and grave, and the white cliffs of Dover. I don’t think my grandsons have my love of literature yet, but I am working on them and remain hopeful.