Do You Know? Poncho Roberts 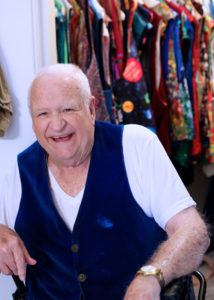 He is perhaps the most quoted and the most colorful person most of us will ever come across. Yet, to come into close proximity of this man leaves a person wanting more of his spirit and zest for life. He loves God, community, and family–and truly no story about him or his life will be complete without Helen Roberts, his wife of more than 64 years. She has been with Frank Roberts so long, each now completes the other’s sentences. Don’t go out asking about Frank or Helen, though—almost no one knows who they are. But ask about “Poncho” and “Sugar,” and see if you don’t find just a little more “togetherness, one more time.”

Where are y’all from?

Do you mean to say you were born in Madisonville?

No, my friend. I mean to say I was born right there on that square in Madisonville, Texas. You see, my mother was already eight months pregnant with me. I know I was all of three and one-quarter pounds. They tell me I was so small, my mother could take her wedding ring off and put it on me, and I could wear it like it was a bracelet. See, Mama was planning on doing a little shopping that day, so she went up to Madisonville that day.

What day was that?

February 19, 1932. My friend, I’m telling you I was ready to hit the ground running, I just couldn’t wait. I did wait long enough to at least let mama make it to a drugstore, where there happened to be a doctor upstairs. I remember his name was Dr. McKay. But when we got close to that store, I just couldn’t wait any more and said, “Hey Mama, I’m coming out.”

You and your wife have a special bond. How did y’all meet?

I was a small boy when my father passed away, and we moved for a time to Houston. I had a great aunt that lived in the neighborhood and ran a boarding house that was just a few houses down from Mr. Henry, who was Sugar’s father.

Sugar Roberts: Do you want to know what I thought of him the first time I saw him? I have two older sisters and one younger sister, and they were all looking out the window and said, “Hey, what a nice looking new boy in the neighborhood.” I looked at him (Poncho), and he was carrying a basketball. I thought to myself that he looked just like that basketball he was carrying—he was not any taller than he was round, and I did not like him.

Poncho: Well, I really liked those groceries. She didn’t like me then, and I don’t want her to like me now, because she’s in love. I’m not going to trade almost 64 years of love for a like. What she didn’t know back then was I had a plan for her to love me. Looks like I done pretty good. She says the Lord put us together, and all I have to say is “Amen.” The Lord performs miracles to behold. The Lord has been so good in my life. He has blessed me to be at the right place at the right time. 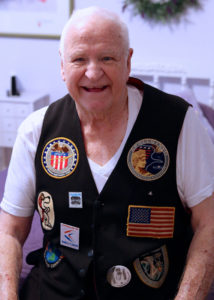 I was able to get hired on with Southwestern Bell, the telephone company, on the 20th of February 1950, and spent 36 years with that company at just the right time and place. The right time was during the great space race the United States was involved in with the Soviet Union. The right place was down around Houston, because a small little thing was coming down the pike and that was a thing called NASA.

I had a cousin that worked for the telephone company, and he was able to get me on as a grunt, or shall I say “low man on the pole.” That was a step up for a young man like me back then. I remember making 80 cents an hour, $32 per week. Man, that was some big money back in those days. It was my first real job. It felt so good to get that first paycheck. I figured

I’d better get me a car. I just knew I was rolling in money, and then I married Sugar, and she broke me! Just kidding.

How does a country boy end up with the likes of Buzz Aldrin, Gus Grissom, and Neil Armstrong?

Well, the telephone company sent me to San Antonio, Texas to earn a radio license. Back in those early days, we were getting into microwave communications. As things turned out, NASA was looking for people to help with the setup of their communications. I put in my request and was one of the ones accepted, and the rest is history—and I’ve seen it all from building number 47.

What happened in building 47? 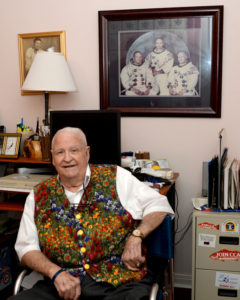 All the communications that came from mission control went through the telephone lines that we set up. In fact, every word the public got a chance to hear or pictures they got a chance to see came through us first. I got to hear and see everything first. Not only that, but we set up all the television systems—everything came through us, right there from building 47. I’d say it was maybe less than one hundred yards away from mission control. Everything went through us before it was put out to the public.

I never in my life though I’d be part of something so special. We were all so young back then, even the astronauts were so young. One day in July of 1969 we did put a man on the moon, and I’m so very, very proud of that.

It was not long after Sugar and I got married that we looked in the sky one night and saw Sputnik, the satellite launched by the Soviet Union in ’57, I believe it was. I knew back then if the United States got involved in the race, I wanted to be a part of it. The Lord is good and saw fit to find room for me for 36 years.

I remember the Apollo 13 mission that we almost lost that crew; I remember when we lost Gus to a fire on the launch pad. I remember the moon landing, and I saw firsthand what a people can do if we all pull together. That’s when I coined the phrase of let’s have some more of that “togetherness, one more time”—because I saw that if we worked together to put a man on the moon and bring him back home safely…what else could we accomplish if we worked together? 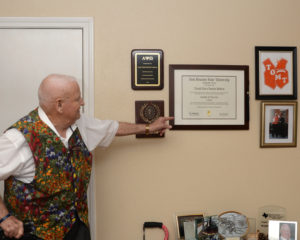 That phrase has gone around the world my friend. Around the world. The Lord has richly blessed me. And part of that blessing is the spirit of togetherness. We need it. Because Christ is coming back, and we will have togetherness for all eternity.

Sugar: I remember during those Apollo 13 days, my husband just almost didn’t come home. Things were so stressful. When he did come home, he was so tired. I worried about him driving home. He told them they needed cots and sandwiches so they could work and not have to leave. They worked out everything. But I think over time, it took a toll on his heart.

Poncho: One day the doctor told me that was it. I needed to step away because things were too stressful for my heart. I’ve had seven bypass operations.

How have you found new challenges in life to match those NASA days? 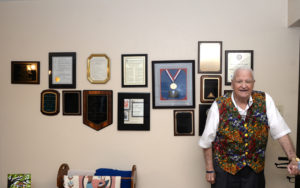 Well, I think my wife can better answer that for me. She felt I could help put a man on the moon, but I was not the handiest man around. So she suggested after I retired to go out and find some projects to work on in the community. I went out and found nine community projects to start, and I’ve been after it ever since.

What are you most proud of?

The Frank D. “Poncho” Roberts Aquatics Center. The Lord has really richly blessed us. I know we wore out a bunch of knees in prayer for that one. But, it was through that spirit of togetherness that this community was able to raise the more than two million dollars for something that really builds up the community. Projects like this never stop yielding a return back to the community. Our kids have a safe place to have a lot of fun. And Huntsville is able to host swim meets that bring so much back to this community for everybody. My little grandbaby is going to be on a swim team, and she is so excited to jump in what they like to call Poncho’s Pond. When they opened that thing, I made sure I was the first one in the water with my Speedo on…just kidding about the Speedo. I couldn’t find one. But when it opened, Sugar and I got off to ourselves and just cried. It was the Lord all the time with a spirit of togetherness.

I heard some boys talking, and one even said that back in his community they have a swimming pool, but in Huntsville they have an Aquatic Center.

That’s another thing; the pride that comes for building up things in our community. That’s togetherness, one more time. They tell me that at the last swim meet, 1,200 kids came and over 2,000 adults from all over the surrounding area. 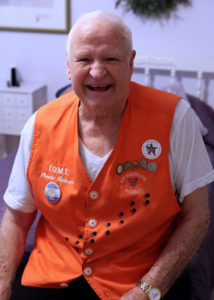 Yes, sir! I am so proud of that. It took me 60 years. Now, that’s a joy that’s hard to keep to yourself. They really touched my heart. I got a standing ovation that day. This whole community standing in a spirit of togetherness. You know you have got to have love, laughter, and fellowship in this life. When you do that for the Lord and use the power of prayer, it is the greatest resource we’ve got. When the Lord is on your side, we can do anything.

One last thing. How did you come by the name of Poncho?

Well, the Spanish name for Frank is Pancho. But, I just love me some Mexican food, especially tamales. When I was working down in the valley, an old supervisor said he was going to change the ‘a’ in Pancho to an ‘o’—because he said I love tamales and have got the ‘ponch’ to prove it. Go figure. But the name just stuck. 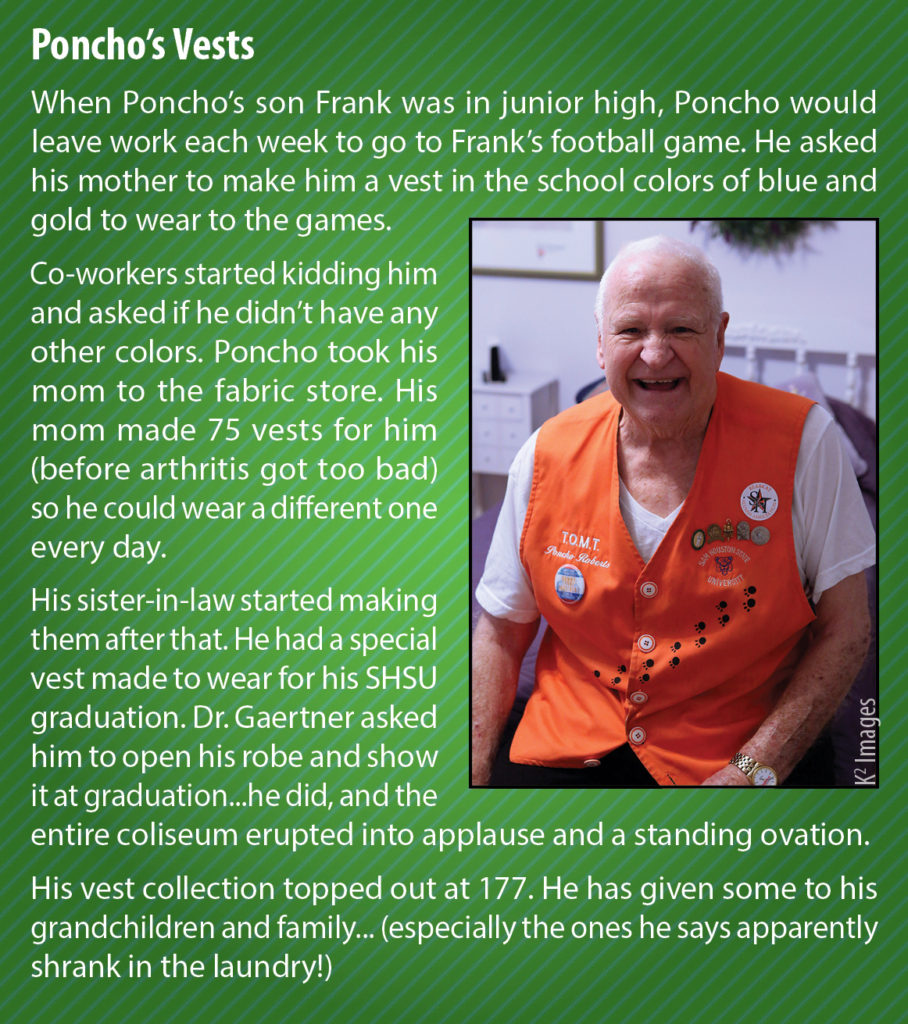