Do You Know? Mitzi Mills 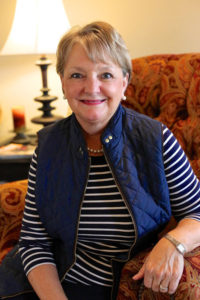 Mitzi Mills was a wife and the mother of two daughters before she realized she possessed an uncommon gift. It’s hard for her to describe it, but when Mitzi looked at a builder’s floorplan in 1985, something amazing happened. “I had never seen a floorplan before,” she says, “yet I felt like I was in the space. When I look at plans, they come alive to me, sometimes more so than actually standing in the house.”

A few years later, Mitzi’s husband Foy talked her into building a home for them. Soon thereafter, she entered the male-dominated homebuilding business as Mitzi Mills, Your Home, Inc. and ultimately built over 60 homes in Abilene, Texas. She has also redesigned several homes, including one in Elkins Lake, where she and Foy, a professor of agribusiness at Sam Houston State University, now reside. “We literally went to the studs in the Elkins Lake house. I wanted it to look like a new house when I was done,” she says. “A friend from Huntsville told me, ‘You were Chip and Joanna Gaines before Chip and Joanna Gaines were ever heard of!’” 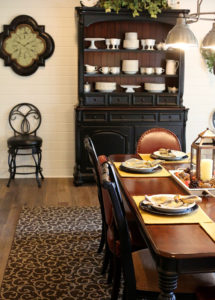 How did you get into homebuilding?

My husband was a professor at Abilene Christian University, and we had lived in Abilene for about five years. A friend from church stopped me on the road one day and asked, “Would you and Foy sell the house you recently remodeled? We want my grandparents to move to town, and your house came to mind.” I asked Foy. He sat there a minute and said, “Sure, if they are willing to pay our price.” It was a cash deal—three weeks and we were done. We then moved into a rent house overlooking an area that was never quite developed. One day, I saw a for sale sign covered up in weeds. The owner lived in a house on the street. Long story short, we bought a lot from him and I started going to builders. I wanted to do more than pick out paint and carpet, but none of them would work with me. Foy told me, “Mitzi, you can do this. You hire the people and let’s build a house.”

Did you have formal training?

I studied pre-nursing at Lubbock Christian University. I worked for a few doctors from time to time, but it was just not what God wanted me to do. I taught myself how to draw floorplans in the beginning, and I took them to a draftsman, but I got weary of waiting for the final product. A friend at church showed me how to do AutoCAD. I had been building houses ten years when I learned how to draw house plans on the computer. 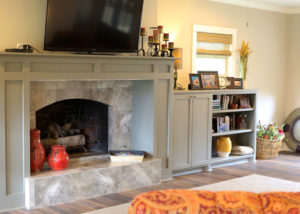 Tell us about that first construction experience.

I built our first house in 12 weeks. It was about 2,000 square feet. At the very end, the concrete guy came back to pour our driveway. He said, “You should build houses. I don’t think I have ever seen anyone more organized.” A few months later, the gentleman I bought the lot from said, “I want you to draw me a house plan and build me a house.” I told him, “I don’t build houses.” He said, “Yes, little lady, you do.” He was seven feet tall. I am a little over five feet, so we were like Mutt and Jeff. Three months later, we poured his concrete—and it has been a whirlwind ever since.

Was it difficult to break into the male-dominated construction business?

I was 35 years old in 1994, when I built our first house. I took my plan to Abilene Lumber. There were men who had worked there for 40 years, and they wouldn’t even look my way. I stood at the counter, and they waited on everybody else. Finally, I asked one of the gentlemen, “Can you help me?” He glanced my way and said, “What do you need?” I said, “What is your price on shingles?” He said, “Little lady, for me to give you that price, you are going to have to tell me whether I’m pricing it by the square or by the bundle.”

When I got home and told Foy about that, it just infuriated him. He said, “I am going to go, and we will see what happens.” When we arrived, we immediately had two or three people to help us. He said, “This is my wife Mitzi, and she is going to be building a house for us. I would appreciate you treating her just like you have treated me.” One of them said, “Okay, are you working with a builder?” He said, “No, she is going to be the builder.” They stood there and stared at us. Foy said, “I am a professor at ACU. I am not going to be coming in. If you can’t wait on her, she is going to be using someone else.” Eventually, Foy became known at Abilene Lumber as my husband, if they recognized him at all.

It was tough to get subs to come to the house. They wanted to interact with Foy. He would say, “I am sorry, you need to ask my wife. She has the information.” The first three or four years I built homes in Abilene, I had a lot of that, but God really led me to people to build a team. I built houses for 18 years in Abilene. I had a real successful business. To be a really great general contractor, you surround yourself with a great team of people.

Did you also remodel homes?

We have been redoing houses ever since we were engaged. Foy grew up on a cotton farm. We were going to move into an old house on some of their land, and his dad said we could fix it up. When we moved into this house two months ago, it was our 30th house in 36 years of marriage.

That’s a lot of moving!

Foy and I are both very neat, organized people. There is nothing in our attic. If it doesn’t have a closet or a drawer to go in, we don’t keep it. A lot of people say, “Why would you want to move that often?” We built my business doing it. 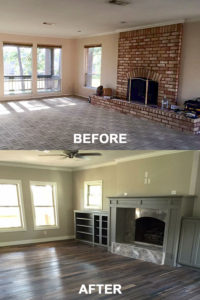 Did you ever fall in love with a house?

It’s crazy, but that’s one of the things God gave me. I don’t get emotionally attached to houses; however, I have mourned over a few. My first house that I called my forever house was on an acre in Abilene. I loved everything about that house. My girls finished high school in that house, so there were lots of memories made there. But my business was growing, and we had other things we wanted to do financially. We sold that house and, about a year later, I did grieve over it. I still drive by it every time I go to Abilene. That one truly was my favorite.

What were some career highs?

The third house I remodeled in Abilene was a major undertaking, and we made significant changes to it. About two weeks after we moved in, we got a big folder in the mail addressed to the previous owner. When she came by to pick it up, her jaw dropped, and with tears in her eyes she said, “I lived here nine years and couldn’t ever figure out what to do with this house. I didn’t want to leave it, but I just couldn’t see how to fix it.” We walked through the entire house, and she was just speechless. I asked her, “Now remind me, where did y’all move?” As she described the house, I asked her if it had been ACU football coach Gary Gaines’ house, and she replied, “Yes. How did you know?” I remarked, “I built that house.”

Another time, as I was writing a check at the local grocery store, the cashier was taking down my information and said, “1716 East North 10th? The one with the white picket fence? Every time I drive by that house, my granddaughter says, ‘Meemaw, I would love to live in that house with you.’” Another friend said, “When you drive down the road, your house says, ‘hello and welcome.’” Those were tender moments for me.

You are so soft-spoken. I’ll bet you never raised your voice.

Oh my goodness! Those who know me well would not call me soft-spoken. I couldn’t build houses if I was timid or insecure or indecisive. When I hired somebody to do a job and it was not done to my specifications, I had to be tough enough to say, “Yes, you are going to redo it.” I have had subs cuss me out. I have had them leave and never come back, and I had to hire someone else. I had to fire people. Sometimes there was a standoff. Some men would have their wives call me. I had to be tough, and I was tough. 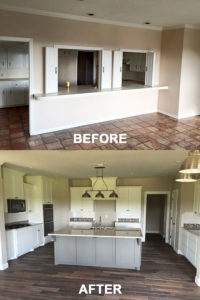 Note: the wall is gone with new open floorplan

What have you done since moving to Huntsville?

Immediately after moving to Huntsville in 2012, I built a home for us in the Westridge subdivision. Shortly after that, the Pregnancy Care Center acquired an old funeral home to move into, and they wanted me to assess the building, listen to what their needs were, and redesign the interior to meet their needs. That was very special to be a part of.

I am not building houses anymore unless it would be for us. Yet, as soon as someone comes to me and says they want me to do a floorplan for them, I can’t get to the computer fast enough. Nonetheless, I have helped four local families by drawing their house plans and have assisted two of them with the building process. I would really like to build a consulting business as a project manager for families that want to build a house on their own, just kind of holding their hand through the process. Or, if they are using a builder, I’d like to help them muddle through changes and choices.

One of my biggest joys is my family. I had the thrill of drawing floorplans for both of my girls. I have four grandchildren who live in Spring, and we find ourselves there quite often. I also have one grandson in Abilene.

Initially, we were not planning on moving into this house. We were going to build another one and had started bidding on lots, but the house I had drawn wouldn’t fit. If you are truly walking with him, God shows you the way he wants you to go. It wasn’t by chance that the lot didn’t work. A peace came over me, and I just knew. This house is becoming a place that Foy and I consider home. It is extremely pleasant and has a beautiful view. We are hoping that in the next two years, God will send us a buyer and we will possibly build another home, but I have stopped predicting, because my life has definitely taken a route that I never imagined.